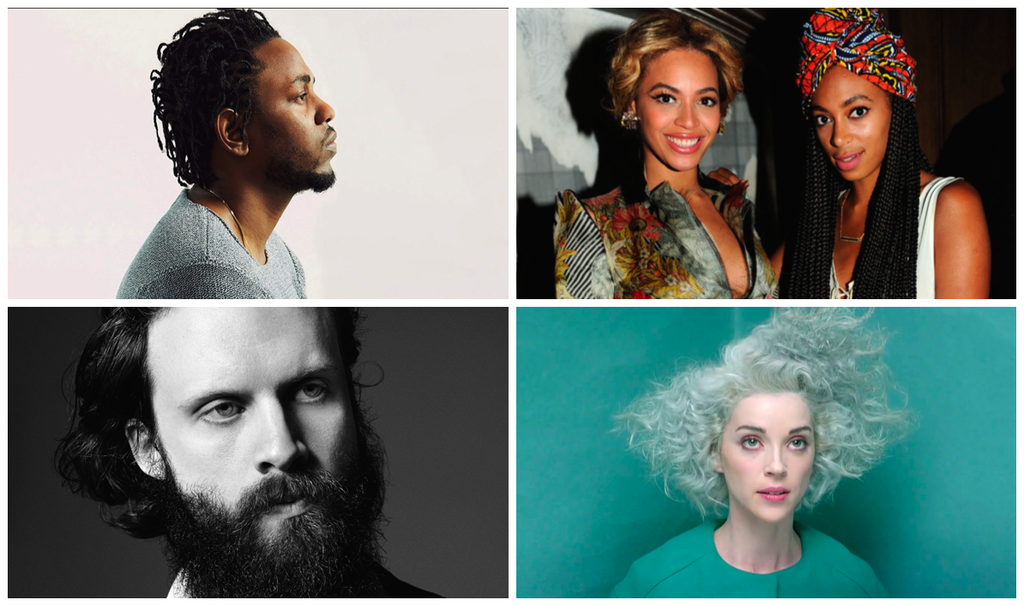 If you’re interested in Vol. 1 of this post, from 2013, check it out here. Fair warning: the books and bands are all white and all male, which is a sad reflection of my lack of awareness regarding my own reading habits at the time and the need for representation in my writing.

Does the feeling evoked by a book ever remind you of a song you love? Have you ever listened to a favorite record and thought, I bet if this artist wrote a book, it would be a lot like _____________? Then step right up, dear reader, and play along with a brand new edition of “If Books were Bands!”

Probably superfluous author’s note: “bands” is being used here as a stand-in for “musical artist” since “bands” makes for a much catchier title. I know Kendrick Lamar is not a band. I promise.

Kendrick Lamar (who just released the excellent DAMN.) isn’t just the world’s greatest rapper, though he is certainly that. He’s also a complex, confrontational artist who used 2015’s To Pimp a Butterfly and (to a lesser extent) last year’s Untitled Unmastered to channel the pride, hope, fear, and anger of the Black Lives Matter movement into 24 songs’ worth of tectonic-plate shifting hip-hop. TPaB gave me the same uncomfortable feeling as Coates’ and Baldwin’s books, because each of them upended some my casual assumptions about race in America and my role in a white supremacist society. Reading or listening to works that challenge your worldview can be tough, because of course it’s easier to just avoid the cognitive conflict and sail on in ignorance. None of these dudes is having that, and that’s what makes them essential.

When I listened to Father John Misty’s last album, I Love You, Honeybear, I was able to forgive his hyper-self-aware, endlessly-satisfied-with-his-own-intellect persona because he folded in enough self-criticism and vulnerability to make it palatable. This is like the actual David Foster Wallace (whom I love, by the way), in that DFW is a show-off, but is also aware that his showiness is mostly a construct built to hide his crushing insecurity.

What would it look like if that awareness disappeared? Well, then you’d have Father John Misty circa 2017, a humorless pedant who desperately, desperately wants you to know how stupid you all are for believing in God, watching TV, checking your phones, buying things, and/or existing in anything other than a mood of constant wry cynicism. So this version of FJM isn’t DFW; he’s one of DFW’s obsessive acolytes (we all know one), hell-bent on convincing you that Infinite Jest is the only book that matters, and pity the fool who hasn’t devoured its 1100+ pages. I get exhausted just thinking about it.

If you’ll forgive the obviousness of this one, I think you’ll find that it’s spot-on (which perhaps is why it’s so obvious). Yes, Beyoncé featured Adichie’s “We Should All Be Feminists” on her 2013 track “Flawless,” but both she and her sister Solange (whose album A Seat at the Table was hailed as one of 2016’s best) make music that explores much of what Adichie tackled in her (fantastic) novel Americanah. Beyonce’s Lemonade made a powerful feminist statement while tackling truths both personal and political. A Seat at the Table was a quieter, but no less impressive exploration of black experience. Its highlight is “Don’t Touch My Hair,” which like Americanah, uses hair as a metaphor for black identity and a way to explore the relationship between the authors and the world they don’t feel entirely comfortable in. Power and vulnerability, masterful writing, and work that challenges and inspires in equal parts? Find it all right here.

If you’ve read The Library at Mount Char, you see why the comparison works. Hawkins’ book is a major dive into the deep end of the WTF pool (in the best possible way). Seriously, even trying to explain the premise of the book beyond “There is a man who gets mixed up with a group of powerful people trained by an ancient being who wreak havoc on an unsuspecting world” would be impossible. Honestly, I’m proud of myself for writing a whole sentence about the book without getting a headache. Every time I got my bearings while reading that book, Hawkins ripped the rug right out from under me. Annie Clark does the same thing (again, in a good way) with her music. You think you have her pegged, and then she wows you with something you didn’t even know you wanted to hear.