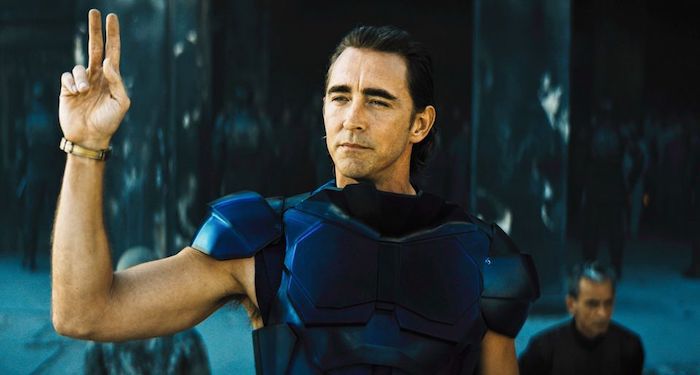 The facts are these: Lee Pace was born in Chickasha, Oklahoma, on March the 25th, 1979. The actor never wanted to be anything else. As a child he lived in Saudi Arabia where his father, an engineer, worked in oil. Later, his family moved to Houston, Texas, where he attended Klein High School, leaving briefly to perform at the Alley Theatre but returning to graduate.

When the actor was an estimated 18 years, 5 months, and 2 weeks old, he began studies at the highly selective Juilliard School. While earning his four-year degree he was cast as the lead in Romeo and Juliet, as Cassius in Julius Caesar, and in various other roles. His Juilliard cohort included actors Anthony Mackey and Tracie Thoms.

He continued to act after graduation, starring in several off-Broadway plays before being cast in the Bryan Fuller–helmed television series Wonderfalls, which shot in Niagara Falls, on the Canadian side. He recommended his Juilliard friend, Tracie Thoms, for the role of Mahandra, the eventual love interest of his character Aaron, a bookish and atheist PhD student in comparative religions who learns of his sister’s ability (inanimate objects speak to her) and has a spiritual crisis.

When Wonderfalls was struck down in its prime, Pace made three bookish motion pictures, all in a row: Merchant Ivory’s The White Countess, from an original screenplay by novelist Kazuo Ishiguro; Infamous, based on the George Plimpton nonfiction Truman Capote: In Which Various Friends, Enemies, Acquaintances and Detractors Recall His Turbulent Career; and The Fall, a strange original fairy tale from Tarsem Singh in which Pace’s young co-star, played by Catinka Untaru, imagines the vivid stories injured stuntman Roy (Pace) tells her. A few years later he made Miss Pettigrew Lives for a Day, based on the novel by Winifred Watson, in between shooting the Bryan Fuller series Pushing Daisies, a surprisingly queer show in which he starred as pie maker Ned, who could bring the dead back to life but could never touch his sweetheart or let anyone find out she was alive.

A bookish life takes many forms, and in the case of Lee Pace, acting on the stage has remained as important as acting on screen, if not more so. His early off-Broadway roles included Craig Lucas’s Small Tragedy in 2004, which earned him a nomination for the Lucille Lortel Award for Outstanding Actor, and Peter Morris’s Guardians in 2006, which earned a second nomination for that award. He also notably starred in Tony Kushner’s Angels in America on Broadway, which is about the AIDS epidemic and which led to his most public discussion of his own sexuality, which had been speculated on at length after Sir Ian McKellen referred to him as gay in press for The Hobbit. He has also been in Larry Kramer’s The Normal Heart, also about AIDS; and Terrence McNally’s The Golden Age with Bebe Neuwirth.

The bookish life of Lee Pace continues to grow — although, as he stands at 6’5″, one hopes not literally.

(Author’s note: I learned while writing this essay that one of Lee Pace’s first screen roles was in the TV movie Soldier’s Girl as Calpurnia Adams, a trans woman. It is completely unacceptable for cis male actors to portray trans women. My understanding — based on unattributed quotes from the actor on IMDb — is that, as a queer person, he felt strongly about the then military policy Don’t Ask, Don’t Tell, which is interrogated in the movie. So I acknowledge that he may feel that way, but condemn the casting choice.)