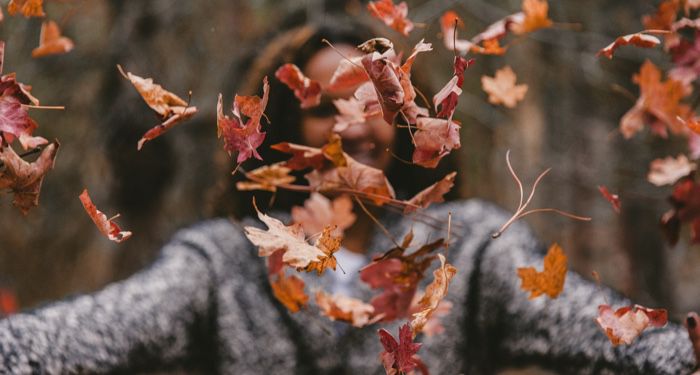 Welcome to autumn, friends! While most places in the Northern Hemisphere are already experiencing the beauties of the harvest, the Fall Equinox officially marks the beginning of the season. (I know, I know — you all thought it was the release of pumpkin spice lattes, which to be fair is a legitimate modern touchpoint. Who doesn’t like a good PSL? They’re delicious. But not what we’re discussing today.)

I am a word nerd, so I would like to briefly discuss the name of the season. Also because when else will I get to discuss this meme?

Look, I’ve always found this hilarious. However, a brief jaunt over to the Online Etymological Dictionary tells us a few things. First, Latin predates French, so that claim is technically incorrect. Second, the season was called “harvest” in English before it started to be called “autumn,” seemingly out of nowhere around the 13th century CE; some sources claim that Chaucer invented the word. Finally, using the word “fall” for the season dates back to the 1540s and is short for “fall of the leaf,” which is a descriptive mouthful but at least still more descriptive than “autumn.”

Furthermore, if the word “fall” was in regular use in the late 1500s, it would have been brought to America by the British as “new” vernacular, which is why it stays here. Upper classes in the UK noticed that dirty plebs were using their new word, and went back to the Chaucerian term to be fancy and distance themselves from the unwashed masses.

ANYWAY. We are actually here to discuss harvest festivals, the fall equinox, and the witch celebration of Mabon, which is a completely made-up holiday created by a Wiccan named Aidan Kelly in the 1970s. No, that’s not a typo. The 1970s. One of the things I learned from reading a lot of books on modern witchcraft (including Modern Witchcraft) is that most of the holidays are approximations and amalgamations based on vague descriptions of non-Christian celebrations, passed down through the years. That doesn’t mean that the holidays are illegitimate. In a sense, ALL holidays are made up, because they celebrate a thing that humans remember and want to celebrate. In 2017, Kelly wrote a fascinating article detailing how and why he chose the dates for Ostara, Litha, and Mabon that he did, based on Saxon holidays, myths, and legends.

That is to say, Kelly put a lot more thought into naming the fall equinox holiday “Mabon,” after the Saxon version of Persephone, than perhaps Christians did into the word “Christmas.”

So, what goes on at Mabon? It is traditionally held in the third week of September to coincide with the fall equinox. In the UK, this is also the end of the harvest season; in the USA, harvest can last longer into fall since most of the United States has a longer growing season, being further south than the southern tip of England. In any case, Mabon celebrations involve creating dolls out of whatever grain stalks are handy, which are kept and then buried at Ostara (the spring equinox) to bring good luck in the fields. This is a throwback to ancient times, when sacrifices would have been made to the harvest gods to bless the fields. We also light candles, burn herbs, do spells by the light of the moon, and bake delicious bread filled with spiced nuts and slathered in apple butter from Wicca in the Kitchen. Because, contrary to some beliefs, witches gotta eat.

Personally, I renew the sigils around my house every holy day (eight times a year). I chalk symbols for growth under my flower pots and for safety under my car. Because I think it’s hilarious, I usually put “friends only” under the “welcome” mat. My favorite resource for this kind of intention magic is Sigil Witchery. Honestly I’m not 100% sure the symbols do any good, but creating and recreating them renews my good intentions and makes me think about what I want to protect in my life, which can only be positive in the end.

Those of us who are readers use the closing of the year the way many readers tend to do: as a good excuse to snuggle in with our favorite books and perhaps make a dent in our TBR pile (ha. Hahahaha). For witches, pagans, and Wiccans, the harvest is also about observing the solemnity of the turning of the year. The time of outside growth is over, and it is now time to seek inner growth and balance to make it through the winter. This winter, I’ll be focusing on understanding history from perspectives I wasn’t taught in school, starting with the work of James Loewen (Lies My Teacher Told Me) and moving to Ibram X. Kendi (Stamped from the Beginning), John Lewis (March), and others.

Mabon has roots deep in the past, but has also been revitalized to represent our very human need to balance scales and cycle between turning outward and turning inward. It is similar to American Thanksgiving in the sense that it precedes the new year (Samhain) by several weeks and provides an liminal period to begin to gather oneself for winter. And more than anything else, it is a time to come together and celebrate the abundance of fall.

Now if you’ll excuse me, there’s a pumpkin spice latte with my name on it at the coffee counter.