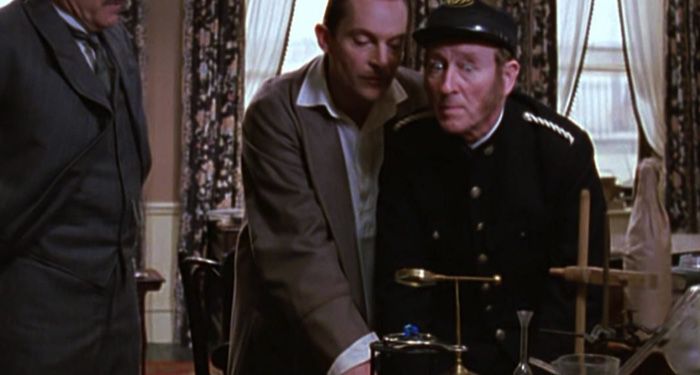 The Adventure of the Blue Carbuncle is as close as Arthur Conan Doyle ever came to a Sherlock Holmes Christmas special—and it’s not even set on Christmas (though later adaptations have a habit of changing that). It wasn’t published in time for Christmas, either. UK readers got the story in January 1892, and Americans had to wait until February.

The action takes place two days after the holiday, when a now-married Dr. Watson comes to visit his old detective pal and finds Holmes obsessively staring at a strange, ill-kept hat. From there, the indefatigable duo untangles a web of lies, treachery, and geese to free an innocent man from jail.

In this article, I’m going to look back at over 100 years of Sherlockian holiday cheer and introduce you to some The Blue Carbuncle adaptations that I like. This isn’t a complete list, or even really a “best of” list. I’m just pointing out the strengths of the versions I happen to have seen (and heard); you can decide which one best suits your taste. Think of it as a little holiday present from me to you.

The Adventures of Sherlock Holmes (1892)

Where better to start than with the original? I summarized it pretty well above, but I’d also like to point out that this story is notable not only for its Christmas setting but for its ending. Holmes does not bring the guilty parties to justice, at least not in the traditional sense of the term. With one of them, he deems it wiser to let him go free, and the other he just seems to ignore. That’s Doyle for you.

The New Adventures of Sherlock Holmes (1948)

This version—an episode of a long-running radio series—is the only version I’ve encountered where Watson has to actively work to convince Holmes to let the bad guy go. It’s all part of a mini subplot about Holmes being grinchy (a minor character straight-up calls him Scrooge, which Holmes does not appreciate), so if you prefer your Holmes a little crankier, track this one down. It’s also worth a listen just for John Stanley’s killer Basil Rathbone impersonation.

Soviet (and later Russian) television has produced some truly amazing Sherlock Holmes adaptations. And then there’s this one. You’ve got fourth wall breakage, absurdist humor, pointed class commentary, the budget of a film student’s finals project, AND poorly choreographed musical numbers, one of which had me weeping with laughter. It also focuses a lot more on the criminals than usual and even adds some interesting twists to their nefarious plotting.

The Adventures of Sherlock Holmes (1984)

How can you not like an adaptation that begins with Mrs. Hudson shooing Holmes out of bed to see a man about a hat? Despite sticking close to the original story, this episode of the famed “Granada series” (so nicknamed for the TV station it aired on) focuses more heavily on our framed innocent, making you feel extra bad for him. Fortunately, it also moves the action up a few days, so the guy can get out of jail in time to spend Christmas with his young family.

Sherlock Hound is an ‘80s steampunk anime that reimagines everyone as anthropomorphic dogs. As you may imagine, their version of The Blue Carbuncle has absolutely nothing to do with the original story, or with Christmas for that matter. But it does have the world’s cutest pickpocket, and Moriarty terrorizing London in a pink mechanical pterodactyl. If that’s not what Christmas is all about, it should be.

The Adventures of Sherlock Holmes (1990)

This radio series’ greatest strength is its ability to stay true to the canon while adding authentic emotional moments between Holmes and Watson. That is especially important for the Christmas episode. It gives you all the poignant twists of the original tale, plus an exceptionally warm ending between our two heroes. If you want holiday fuzzies, this is the adaptation for you.