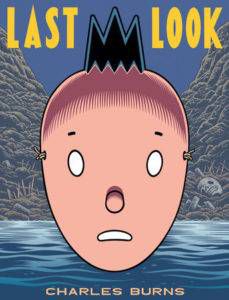 How much story do you need at a time?

I’m one of those people who rarely reads single issues; I’d rather wait for the trade paperback and get the whole arc in one chunk than enjoy a small taste and have to wait for the next bite. I watch entire Netflix seasons in a matter of days. I read the first five Song of Ice and Fire books in three psychologically disjointed weeks and the first four volumes of Fables in four days, while camped out in the bed of a new friend who I was totally not using for her comic book collection. I hate cliffhangers. I like to know what’s happening, preferably before it happens, but, if that’s not possible, then at least as it’s happening. I like series that are finished and knowable, where all questions can be answered, all story lines tied up.

So I can’t imagine how readers of Charles Burns’s X’ed Out Trilogy managed to maintain their sanity while waiting for the individual volumes of this mind-bending story. Collected together under the title Last Look, this painful, surreal, all-to-human narrative skips around in time and jumps back and forth between the mundane world and some other nightmare place, a series of scenes that clearly connect, but don’t resolve into a complete picture until a revelation delivered eight pages before the end. The first volume, X’ed Out, was originally published in 2010, with the second book, The Hive, in 2012, and the series’ conclusion, Sugar Skull, arriving in 2014. The collected volume was released in 2016.

Two years isn’t too terrible, I guess. Maybe I could wait two years if the author provided me with enough material to hypothesize what was happening? But I definitely have my limits, which I why I will never know how Faust: Love of the Damned ends. People can change a lot in five years. People’s priorities change. People’s tolerance for gratuitous violence and gore changes. But at least Faust offered enough information that I could guess at the kinds of things that might happen next. I can’t imagine reading just X’ed Out and saying, “Yeah, that makes sense.” The clues that I did manage to pull out of the first part of the trilogy—I was reading them entirely wrong.

Unlike some other surreal comics I’ve written about, like Joshua’s W. Cotter’s Nod Away, which gets plenty weird but offers the readers breadcrumbs along the way, Last Look drops numerous visual hints without really leading the reader to true source of the mystery. With Nod Away, I could figure which direction the story was heading, even if none of the supporting characters were willing to clue the protagonist in on some of the plot basics. Even when I accidentally started American Vampire at volume seven, I had no trouble following the story and guessing at who the characters were, what their major motivations were, how the new knowledge they acquired fit into lessons they had clearly learned in volumes one through six.

With Last Look, I read more slowly and carefully than I usually do, trying to form working hypotheses the entire time, attempting to create a cogent picture of the character’s journey. As soon as I came to the end, I turned it over and read it again. I read it about six times, getting a little bit more meaning with every pass. If I’d only had X’ed Out, I’m not sure it would have engaged me to the same degree. It’s an amazing story in three parts, but I needed to have all three parts at the same time.

It seems like I must be in the minority, given how excited people get about picking up their single issues once a week. What about you? Trade paperbacks, or one issue at a time?