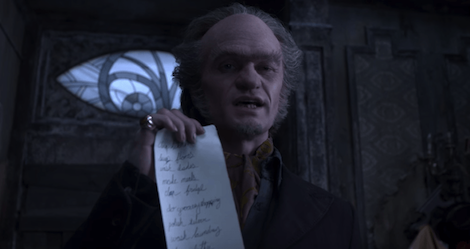 I’ve been a fan of Lemony Snicket’s A Series of Unfortunate Events since I was a baby child, scouring the school book sale for paperback versions of the newest releases. As you can imagine, I couldn’t wait until Netflix released their adaptation of the series. I was optimistic that it would be better than the film, which I only accepted at one point because when you’ve got nothing, you take what you can get. As someone who re-read the series over this past winter holiday, I firmly believe that Netflix couldn’t have done a better job portraying the heart and soul of these books.

Eight episodes long, this first season covers the first four books in the series: The Bad Beginning, The Reptile Room, The Wide Window, and The Miserable Mill. One of my favorite elements of the books, especially during my re-read as an adult, was how crucial books are throughout the Baudelaire children’s attempts to escape the clutches of the dastardly Count Olaf again, and again, and again. Therefore, I put together a short list of the book-related moments in the Netflix adaptation that either made me think, appreciate, or laugh.

Here are my favorite bookish moments in the television series – not a comprehensive list, just the highlights. Some of these are also present in the book series, but they were gratifying to see on camera nonetheless.

Klaus Baudelaire, 12 years old: “In the book The Great Gatsby, there’s a famous sign shaped like a pair of eyeglasses.

Phil, the optimistic mill worker: “Does it represent an optometrist?”

Klaus Baudelaire, 12 years old: “It represents the eyes of God staring down and judging society as a moral wasteland.”

Keep an eye out for some of these literary delights as you watch the series, if you feel so inclined. I’m already looking forward to what bookish easter eggs might be found in the next season, whenever it’s released in the future.