I used to think writing in books was a sin, especially writing in nice hardcover editions. And then I read Michelle Obama’s Becoming and underlined a bajillion passages. There are just so many beautiful nuggets of wisdom in the former First Lady of the United States’s memoir.

I saw her and Oprah on the first stop of her book tour in Chicago and was smitten. I lucked out and got a signed copy of the book. I cried. And then I came home and read it in small gulps, afraid that if I read too quickly, I’d miss out on something gorgeous. It was the perfect book to read in small chunks right before bed. Even when she writes about the terrible, horrible things about this world, she finds a way to turn it into a place for progress.

Here are the best, most powerful quotes from Becoming. And if you need more Michelle in your life, we also have this collection of inspiring quotes, and books recommended by Michelle Obama, and a Michelle Obama tour of Chicago. 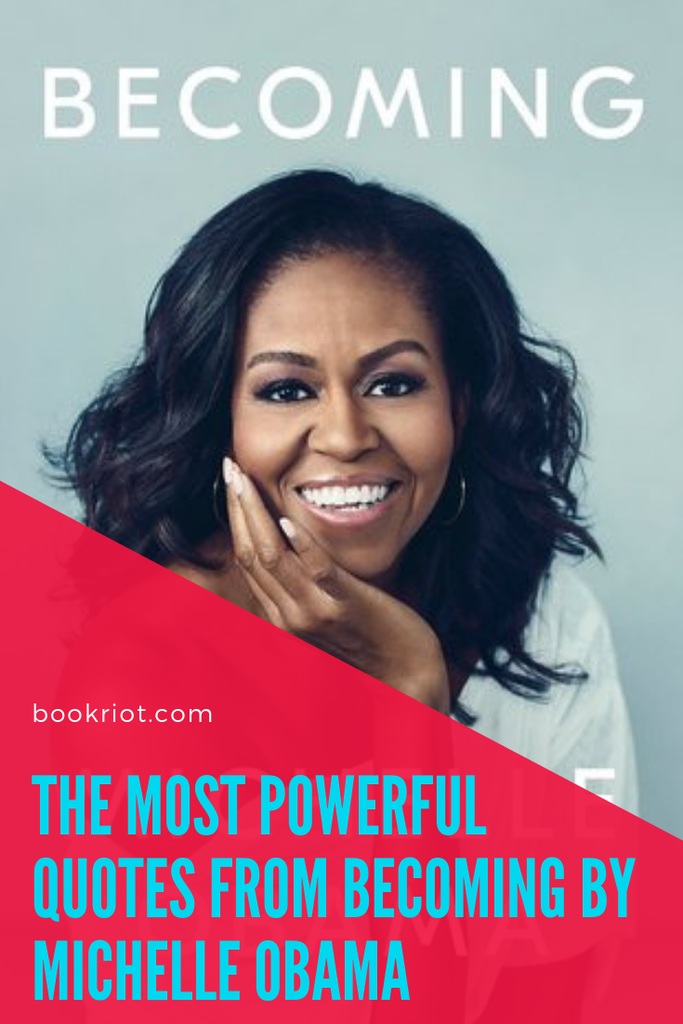 “The easiest way to disregard a woman’s voice is to package her as a scold.”

“Like a lot of girls, I became aware of the liabilities of my body early, long before I began to even look like a woman.”

“Most of us lived in a state of constant calibration, tweaking one area of life in hopes of bringing more steadiness to another.”

“Women endure entire lifetimes of these indignities—in the form of catcalls, groping, assault, oppression. These things injure us. They sap our strength. Some of the cuts are so small they’re barely visible. Others are huge and gaping, leaving scars that never heal. Either way, they accumulate. We carry them everywhere, to and from school and work, at home while raising our children, at our places of worship, anytime we try to advance.”

“To me, there was magic in the learning.”

“This is what a control freak learned inside the compressed world of college, maybe above all else: There are simply other ways of being.”

“It’s hard to put into words what sometimes you pick up in the ether, the quiet, cruel nuances of not belonging—the subtle cues that tell you to not risk anything, to find your people and just stay put.”

“I’d never related to the story of John Quincy Adams the way I did to that of Sojourner Truth, or been moved by Woodrow Wilson the way I was by Harriet Tubman. The struggles of Rosa Parks and Coretta Scott King were more familiar to me than those of Eleanor Roosevelt or Mamie Eisenhower. I carried their histories, along with those of my mother and grandmothers. None of these women could ever have imagined a life like the one I now had, but they’d trusted that their perseverance would yield something better, eventually, for someone like me. I wanted to show up in the world in a way that honored who they were.”

“Even if we didn’t know the context, we were instructed to remember that context existed. Everyone on earth, they’d tell us, was carrying around an unseen history, and that alone deserved some tolerance.”

“The answer, I’m guessing, is probably the best and most sustaining answer to nearly every question arising inside a marriage, no matter who you are or what the issue is: You find ways to adapt. If you’re in it forever, there’s really no choice.”

“If you don’t get out there and define yourself, you’ll be quickly and inaccurately defined by others.”

“It was possible that I was more in charge of my happiness than I was allowing myself to be.”

“Even when it’s not pretty or perfect. Even when it’s more real than you want it to be. Your story is what you have, what you will always have. It is something to own.”

“I wasn’t going to let one person’s opinion dislodge everything I thought I knew about myself.”

“Confidence, I’d learned then, sometimes needs to be called from within. I’ve repeated the same words to myself so many times now, through many climbs. Am I good enough? Yes I am.”

“So many of us go through life with our stories hidden, feeling ashamed or afraid when our whole truth doesn’t live up to some established ideal.”

“Now I think it’s one of the most useless questions an adult can ask a child—What do you want to be when you grow up? As if growing up is finite. As if at some point you become something and that’s the end.”

“Inspiration on its own was shallow; you had to back it up with hard work.”

“It was possible, I knew, to live on two planes at once—to have one’s feet planted in reality but pointed in the direction of progress.”

“For me, becoming isn’t about arriving somewhere or achieving a certain aim. I see it instead as forward motion, a means of evolving, a way to reach continuously toward a better self. The journey doesn’t end.”