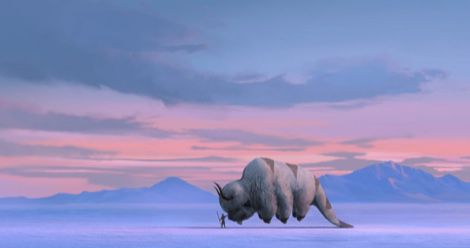 Recently, Netflix announced they would be partnering with Nickelodeon to do a live-action version of Avatar: The Last Airbender.

Fans rejoiced! But they were also a little cautious; the previous version of the show and the 2010 movie do not have a great history of showcasing diversity.

This time around, the showrunners say it will have “a culturally appropriate, non-whitewashed cast,” which is a good start.

But as one Alaska Native, Ruth Dan, recently pointed out on Twitter, significant parts of Avatar’s world are based upon Inuit culture. Adapting the show to live action could have certain pitfalls and missteps.

Ruth Dan and I spoke about the northern aspects of Avatar and how the live-action show has an opportunity to represent Inuit culture accurately.

MS: First, tell me a little about yourself!

RD: I’m Ruth Dan. I am Central Yup’ik and my family is from Stebbins, Alaska. I was raised in Anchorage, Alaska, and I currently go to school at the University of Rochester. My pronouns are they/them.

MS: It’s lovely to meet you. To start off, let’s share the points you mentioned on Twitter:

The Inuit* are a nation of many communities in Arctic & Subarctic regions in Russia, the US, Canada, & Greenland and totalling about 170,000 people

The N/S Water Tribes are positioned similarly in the world of Avatar, on the coldest extremes pic.twitter.com/CRLDSfFHa8

*The Inuit are formerly known as Eskimo, but if you’re not familiar or intimate with any of this, absolutely do not use Eskimo

The creators of Avatar have openly admitted to basing the Water Tribes after Inuit, though the association is clear as demonstrated by these hair loopies:

(Photos are from Atanarjuat: The Fast Runner (ᐊᑕᓈᕐᔪᐊᑦ) a 2001 film directed by Zacharias Kunuk) pic.twitter.com/3dflpsv8gH

A number of names are derived from Inuit names: Tonraq, Unalaq, Noatak, etc

(I’m not going to get into what words they’re derived from and the meanings, but you could if you wanted to)

And then there’s stuff like the igluvijait (snow houses) in Katara and Sokka’s Southern Water Tribe village, while iglu/igluit means any kind of house in many Canadian Inuktitut dialects pic.twitter.com/HQAT9ITgbI

Avatar has even taken our modern disputes for their inspiration, the conflict over oil and ‘progress’ in the the graphic novel Avatar: The Last Airbender—North and South has been taken straight from conflicts in Inuit territory in Alaska pic.twitter.com/tUh51FXzK8

And bottom line, if you’re looking to take inspiration for a people with an ice-based lifestyle, the Inuit are pretty much the only option

The creators of Avatar: the Last Airbender have borrowed a lot from the Inuit, and without our permission

So remember when you hear news about the new live-action Avatar series, it wouldn’t be possible without us

We deserve to be represented on screenhttps://t.co/28E7oWd3BQ

MS: What else might you add to these really excellent insights?

RD: Maybe this was unintentional on the part of the creators, but in Book One, Episode 15, Aang, Katara, and Sokka meet up with Bato, a warrior from their village.

Bato has his room set up in traditional Southern Water Tribe style, with animal furs—another thing that you’d find in many traditional Inuit houses.

But what I really enjoyed was when they ate “stewed sea prunes,” which is a traditional dish for them. Aang tried some, and had this really exaggerated, grossed-out reaction, which is funnily how many non-Inuit people react to our food in real life.

There’s a really similar scene in Action Bronson’s show “F*ck, That’s Delicious,” when he and his crew visit Alaska. An Iñupiat family hosts them and feeds them traditional food—and Action Bronson himself is really down with it. But one of his crew has a reaction really similar to that scene in Avatar, and I always laugh when I watch it.

MS: That’s funny! What were they eating?

RD: There were a number of different foods, I think—whale, seal, fish.

MS: Nice. Okay, so I’m sorry if this is a totally dumb question, but: it seems like you really enjoy the show, despite its appropriation of Inuit culture. What is it like to watch a show that reflects some parts of your culture?

RD: I think Avatar is one of the few cases of appreciation, rather than appropriation.

A lot of the time, if things are too close, it can feel like non-Natives or non-Inuit are using us as puppets. They’ll take our culture and history, and fill it in with their own ideas about what we should do or think.

It’s pretty incredible to see people like us, even if they’re not exactly the same, being main characters with well-developed backgrounds that are crucial to the story.

And the creators avoided most of the stereotypes and racist tropes many racists use against Inuit in real life. For the most part, Avatar didn’t treat the Water Tribes like they were savage or backwards or incapable of great accomplishments and civilizations.

MS: That’s such an important point! With the new series, then, what would you like to see, especially in terms of acknowledging the connection to Inuit culture?

RD: For the most part, all of the elements of Inuit culture I saw in Avatar are totally fine to use for the live-action series just as they did in the animated series.

What’s really important, I think, is the actors.

If our culture is used to develop the Water Tribes, that can work, but they should also use our actors. They shouldn’t use our culture when it’s easy, but then switch out the actors with those of other communities because it’s hard to get Inuit actors.

And of course, it wouldn’t hurt to hire an Inuit cultural advisor. While they did fine in the animated series, not every element of our cultures are okay to take or misrepresent, and if they change anything significant in the live action series they may run into that problem.

MS: Why is it important to see yourself—your culture and community—reflected in a show like this?

RD: For many Inuit, seeing ourselves represented on screen is important, but having actors that played those big roles in the community is equally valuable.

Avatar: The Last Airbender is loved by thousands and thousands of people, and to show that Inuit kids that we can play big roles like that, like any other ethnicity or community, that would be huge.

MS: Thank you so much! You’ve done a ton of work to put this together, and I know you’re a college student—how can people show their appreciation?

RD: If you want to compensate me for the hours of work to put this together, I appreciate donations to my PayPal. Quyana cakneq!