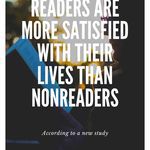 Studies have shown that readers are more empathetic and that it can improve cognitive function. A new study by SuperSummary, an online resource that provides in-depth study guides, suggests reading has yet another benefit: self-identified readers are more satisfied with their lives than those who don’t identify as readers.

Are Readers More Satisfied With Their Lives? 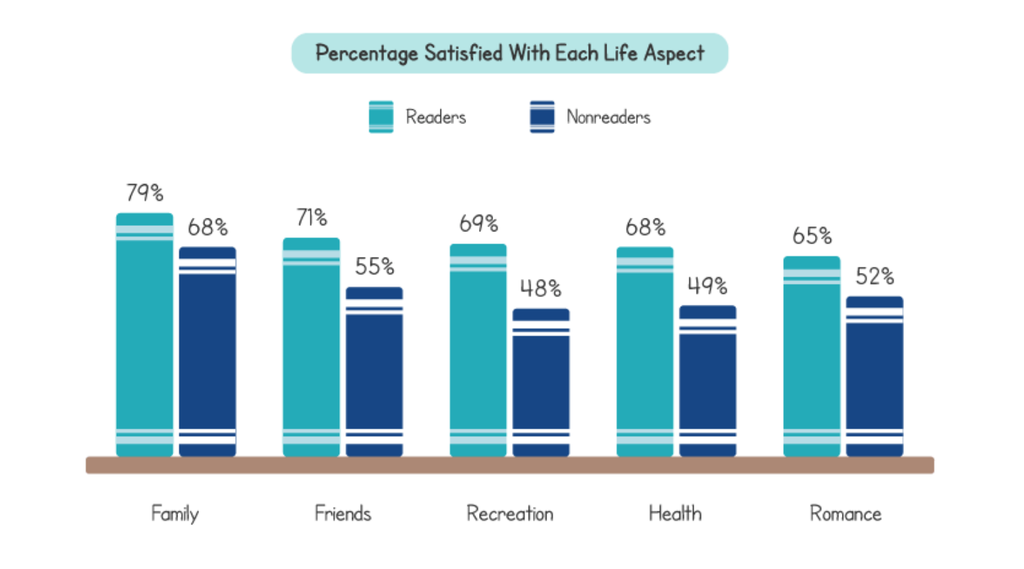 Readers have more healthful habits than nonreaders. The difference in the percentages of readers who eat healthfully and have consistent sleep schedules is much higher than nonreaders. While SuperSummary’s report suggests this is because readers have higher self-regard and reported they control over life outcomes and a vision of what they wanted out of their life, it doesn’t suggest that reading as a leisure activity—and indeed, defining what “reading” is—is affected by socioeconomic class.

Time to read suggests exactly that: time to read. Those experiencing financial challenges, who work inconsistent schedules, live with food insecurity, or other realities of economic disparity don’t have time or resources that would allow them to identify as readers. More, eating healthy and having a consistent sleep schedule may be luxuries and inaccessible in the lives of nonreaders, as opposed to something they have easy control over. Readers likely feel more control because they have more control.

The idea that readers have better eating habits because they hold themselves in higher esteem than nonreaders fails to account for the fact that eating healthy is socially constructed and a privilege to those with time and resources. Certainly not all nonreaders are at a disadvantage, but many are, and that does not reflect upon their self-regard or self-esteem. In the data, though, it should be noted that only 36% of nonreaders felt financially secure and only 40% felt financially stable.

Readers have more access to knowledge about finances than nonreaders, and as seen above, readers have a higher median income than those who are nonreaders. They’re also more likely to be employed full-time and have money saved.

Among the more interesting data points are the types of preferred reading genres and average income. Readers who tend toward books about parenting and relationships, as well as books about business and money, have higher average incomes than those who read romance or cookbooks. It isn’t entirely surprising to see that those who read business and money books tend to have a higher amount of money in savings than others. More financial literacy helps people make financial decisions that are advantageous, but to get to either of these places, it’s necessary to have leisure time and financial security for it.

The survey’s goal was to assess satisfaction in life, and SuperSummary dove not only into the habits of readers above, but also their personalities. 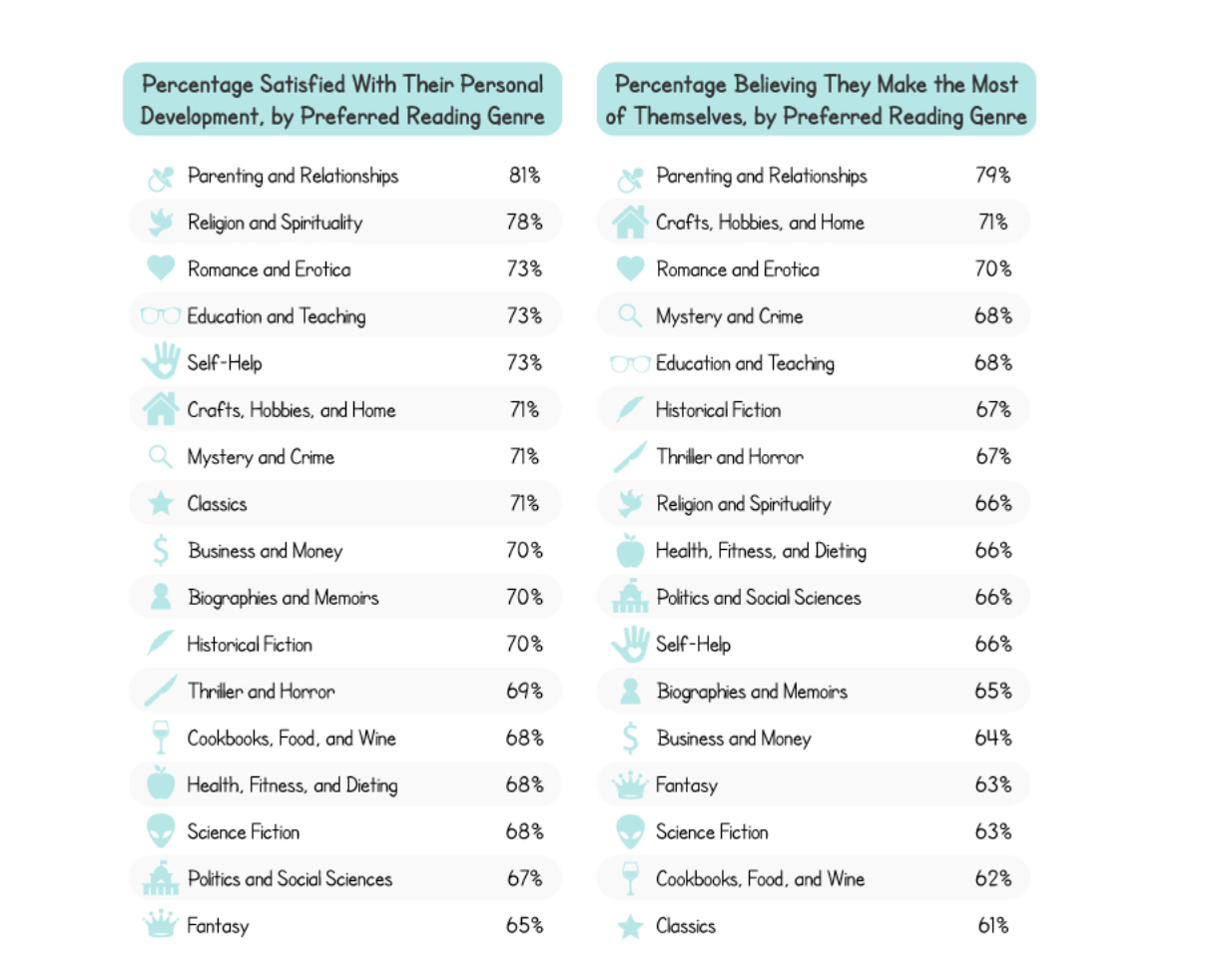 What’s interesting in the breakdown by genre, though, is how it doesn’t align with financial data. Where romance readers were among those with the lowest median income and lowest median savings, they were among the most satisfied with their personal development, as well as those who believed they made the most of themselves. As women make up 84% of romance readers, it’s not surprising that their median incomes would be lower. SuperSummary did not collect racial data, but the disparity of income among women of color from white women, as well as men, further this.

Classics readers were the least likely to believe they were making the most of themselves.

But even among the various genres, satisfaction with one’s life and belief that one is making the most of their life doesn’t differ dramatically. The act of reading it and of itself correlated with life satisfaction.

The question at the heart of this study was whether or not readers were more successful. But what is success? If taken by the data explored, success is measured by specific mental models—self regard, belief that one is making the most of themselves, and so forth—and by specific tasks associated in American culture as “healthy.”

These are, of course, measures of success in a white, able-bodied Western culture.

The data above suggests that readers are, indeed, happier and healthier. But the data also shows grave limitations, particularly when it comes to exploring income inequality and the systems of oppression that hinder the success of people of color, as well as other minorities or disadvantaged populations.

“Readers” and “nonreaders” were self-identified in this study, with definitions that were wide open. By nature of the types of reading genres, it appears as though books were the definition of reading, as opposed to magazines, newspapers, or digital material. Readers and nonreaders limited to the idea of reading to a specific format plays even further into the issues mentioned above: people from disadvantaged backgrounds are less likely to have access to books. This is the same missing piece of the puzzle that isn’t addressed in the well-publicized study about how having books in the home gives children an advantage.

The study also didn’t explore whether or not the participants were native English speakers or spoke English as a second or third language.

Indeed, those who have access to the time and tools that define what being a reader is are more successful in tightly-defined and limited ways. But this study, like many others, show more about the perception of what a reader is and what success is than it does whether or not readers are successful.

Those who read books about the successful habits of a culture and acclimate to them see themselves as successful for doing so, and they’re rewarded for it. But those who don’t define themselves within those tight confines are less likely to do the same.

SuperSummary surveyed over 1000 people, with 460 male-identified respondents and 530 female. Their incomes ranged from under $10,000 a year to over $100,000, with a medium income of $42,000. Those who responded were between 18 and 78 years old, with an average age of 38. “Readers” were defined as those who read regularly and nonreaders, those who rarely or never read.

It’s worth noting the survey used Amazon Mechanical Turk, further narrowing the potential pool of reader/nonreader data. Being a Turk worker requires access to the internet, a keyboard, and time to participate in tasks like this.