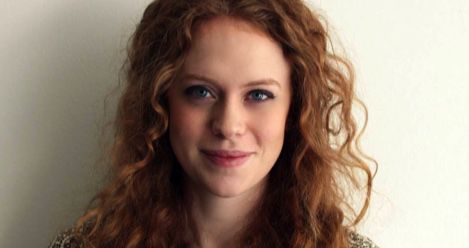 Pages & Co by literary journalist Anna James is a book lovers of bookshops and classic characters. Have you ever got lost in a good book? Imagine if you could really get lost. 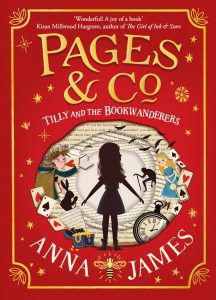 This is what happens to 11-year-old Tilly as she wanders the aisles of her grandparents’ London bookshop, Pages & Co. One minute she’s flipping through a copy of Alice in Wonderland and the next a real-life version of Alice is standing in front of her, asking her if she’d like to go to a tea party.

Tilly discovers that she’s got an ability to “Book Wander”—enter books and explore them as she likes. There are rules, though, and lots of danger to be had, especially if you enter the wrong page of Treasure Island.

Pages & Co is the first in a series of books about these kinds of great adventures. It should be on the list of any Harry Potter, Anne of Green Gables or Alice in Wonderland fan out there.

I was fortunate enough to interview Anna regarding her debut novel, Pages & Co: Tilly and the Book Wanderers!

Lucas Maxwell: Pages & Co is a great fantasy adventure & it’s also a love letter to bookshops. Do you have a favourite literary bookshop or a favourite real bookshop? 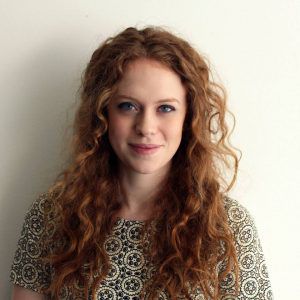 Anna James: It’s absolutely a love letter to bookshops, and Pages & Co is built from all my favourites, real life and fictional. My favourite real life bookshop is probably Toppings & Company in Bath, which I only visited after I’d written Pages & Co and it as like walking into my imagination. I was offered tea and biscuits while I browsed and given some amazing book recommendations. My favourite fictional bookshop would have to be Sempere & Sons from The Shadow of the Wind.

LM: Independent bookshops in the UK have been disappearing steadily in the UK for over 20 years. Yet last year the numbers started to rise again. What would you say to someone who doesn’t see the point of bookshops when Amazon is only one click away?

AJ: Bookshops just offer a completely different thing to Amazon and I don’t think it’s super helpful to compare them. A bricks and mortar bookshop is about community, and serendipity, and recommendations, and atmosphere, Amazon is just about convenience. We have some truly beautiful bookshops in the UK at the moment that seem to be flourishing, and I really hope that trend continues.

LM: Characters like Alice and Anne of Avonlea amongst many others play important roles in Pages & Co. Why do you think these kinds of characters endure, what makes them so special?

AJ: It was really interesting going back and rereading a lot of children’s classics when I started writing Pages & Co and seeing which characters still chimed with me, which had dated, which were exactly as I remembered them. Anne Shirley was the one that was the most familiar to me, but this is also probably because it’s one of the books I’ve reread the most. I don’t necessarily think that we should hold classics up as some sort of perfect reading experience; not all classics are for all readers, but they have endured for some reasons, and I think they tend to be that the voices of these characters hold something universal. Anne’s optimism and wit, Alice’s curiosity and contrariness, Sara Crewe’s kindness, these are things that don’t really need historical context.

LM: When you were a school librarian, what were your go-to books to get students interested in reading?

AJ: One thing I said a lot to my students is that if they don’t like reading it’s because they haven’t found the right book yet and I think that being a good school librarian is all about matchmaking, there’s very few books that I would recommend to anyone. Having said that I used to recommend Paper Aeroplanes by Dawn O’Porter to older girls a lot to great success, and a lot of Marcus Sedgwick and Kevin Brooks to reluctant boys. There’s no place for snobbery in school libraries though, there’s space for all kinds of books if it turns a child into a reader.

LM: The British Library also plays a big role in the novel. Coming from rural Canada, the first time I set foot in there I was pretty overwhelmed, in a good way. What’s been your relationship with it? Is it a special place for you outside of Pages & Co?

AJ: I adore the British Library, and I write there a lot – big chunks of Pages & Co were written there. It actually wasn’t even in the original idea but I was writing in one of their reading rooms, it just became part of the story. I also have fond memories of it from taking groups of A Level English students down to some of their amazing free workshops they do for students. It’s an incredible resource, and a beautiful library, and I’m very lucky to have it so close to where I live.

LM: What were the first stories you wrote when you were young?

AJ: I wrote a lot of what was essentially Famous Five fan fiction when I was young. I wrote endless stories about my cousins and my sister and I taking off into the Northumbrian countryside (where I grew up) and discovering lost treasure and eating a lot of picnics and suchlike. A lot of what I wrote was putting myself inside my favourite books, so writing Pages & Co where Tilly travels inside her favourite books is perhaps an inevitable extension of that!

LM: We have a dedicated group of 13-year-old students who use the Library every lunch hour to write a book collaboratively. I’ve been collecting advice from several authors to keep them motivated and engaged in their work, do you have any words of wisdom for them regarding writing?

AJ: Something I do if I’m struggling to get into a creative headspace is to read something by a writer I admire that’s nothing at all to do with what I’m trying to write. So I can’t fall into the trap of comparison but I find it hugely inspiring, to remind me of the power of good fiction, and also just to get my brain into that creative mindset. I often will read a short story by a write like Ali Smith to get started. My other advice would be don’t worry if other people’s advice doesn’t work for you! I spent a lot of time getting bogged down trying to plot out my second book “properly” before writing any of it, before realising that it just didn’t work for me, and that was okay.

LM: Aside from Alice and Anne, did you have book characters that you befriended as a child? I know I did, and they mostly came from The Hobbit!

AJ: I was a huge Lord of the Rings fan when I was younger, so I would have definitely joined you in some Middle Earth adventuring! The other character that had a huge impact on me was Lyra from Northern Lights by Philip Pullman; those books were formative for me and taught me a lot about questioning what you’ve been told is true, and also about storytelling. If they were out of copyright, Lyra would definitely have made an appearance in Pages & Co!

LM: If you had to choose one classic to give to yourself as an eleven year old which would it be and how would you promote it?

AJ: It depends on the eleven year old! I have to fight the urge to say Anne of Green Gables, because that’s the book I love the most, but I don’t think you can go too far wrong with Alice in Wonderland for any reader. It’s short, weird, funny and anarchic, and also has a level of familiarity because most readers have some awareness of the story, which can make it less intimidating. (But also everyone must read Anne of Green Gables, it is a pure delight of a book!)

LM: Finally, and I’m sorry if you’ve seen this coming a mile away: imagine you’ve been sucked into the world of literature. The good news is that you get to choose which literary setting you get to live in. The bad news is that you have to stay there…forever? Which setting do you choose and why?

AJ: This is such a hard question, and the joy of bookwandering is that you can leave again. Most of my favourite books I wouldn’t want to get stuck in for any length of time! My real answer would probably be something very dull where nothing too scary happens, which would make for a terrible book. But, honestly, while I think I would find some of the attitudes of the time grating, to say the least, I do think I would have to say Anne of Green Gables, either as the same age as Anne, or to go in now and tell her quite how wonderful she is and that she is greatly loved!