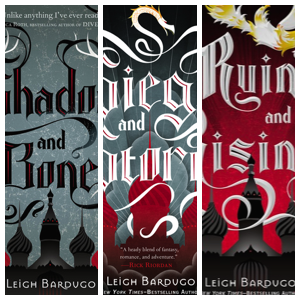 The third book in Leigh Bardugo’s Grisha Trilogy came out recently and oh my goodness, what a marvelous end to a blazing success of a series.

It made me laugh, it made me cry, it made me send frantic tweets to people I don’t really know because I thought they’d understand what I was going through while reading it.

More importantly, it cemented my belief that this trilogy is some of the finest fantasy published in recent years. I’ve already bought the books for myself and one set as a gift.

The linchpin at the center of this strong, smart series is its fabulously flawed, endlessly human main character, the one and only Alina Starkov.

I’d like to take a moment to talk about Alina and why she rocks so hard as a lady hero. (A woman like Alina doesn’t need the pretty, softened suffix of “heroine.”)

**The rest of this post will contain vague spoilers for the Grisha trilogy. If you want everything to be a total surprise, close this post now and go start Shadow and Bone instead.**

She doesn’t have time for love triangles.

“Maybe love was superstition, a prayer we said to keep the truth of loneliness at bay. I tilted my head back. The stars looked like they were close together, when really they were millions of miles apart. In the end, maybe love just meant longing for something impossibly bright and forever out of reach.”

There are several potential love interests in Alina’s story, but which man to choose never takes up too much of Alina’s mental bandwidth for the simple reason that she does not have time for that kind of drama. I love a love story as much as the next person, but it was refreshing for a YA fantasy trilogy to flirt with all-consuming love triangle of heartbreak cliché and then sideline the issue in favor of other plot elements.

Alina feels the pull of both romance and sexual desire, but she never lets her love life overshadow the importance of the larger things she’s trying to accomplish.

Alina’s looks are not part of her value.

Alina’s physical appearance isn’t ignored — we have an understanding of her relative level of perceived beauty from the very beginning — but it never really affects anything other than how she sees herself.

Her makeover moment is subversive.

Do you know what I mean by the makeover moment? It’s when a female character is dressed up for plot-related reasons and her previously subtle beauty becomes obvious to all characters (think Hermione Granger at the Yule Ball, or when Rachel Leigh Cook comes down the stairs in a red dress in She’s All That).

Alina does get to play dress-up, but as soon as the Cinderella moment happens it’s placed in a context that makes it mean something completely different.

When Alina takes control of the Second Army, she doesn’t win the hearts and minds of her followers by baking muffins or using clever one-liners. She asserts her dominance by blasting a hole in the palace ceiling with her raw, violent power.

She makes her own path.

“Like the teachers at the Duke’s estate, the priest thought he knew the girl and what she was capable of. He was wrong. He did not hear their hidden language, did not understand the boy’s resolve. He did not see the moment the girl ceased to bear her weakness as a burden and began to wear it as a guise.”

A lot of people in the series – mostly male people – have strong ideas about what Alina should do and who she should be. It would have been easier at several points for her to go along with what one powerful man or another wanted her to do, but Alina refuses to entirely comply with anyone’s vision except for her own. This involves turning down more than one opportunity to become a queen or a princess.

She has to work for it.

Alina Starkov is an ordinary person before she is thrust into extraordinary circumstances and, like any person who is suddenly faced with a new challenge, she has a really hard time at first. This applies to everything: using her new-found power, being a leader, projecting a certain image. She gets better with practice, but it’s never easy.

She is friends with other strong women.

Alina may be the Sun Summoner, but she’s not a Queen Bee. Instead of choosing the company of simpering lackeys, she gravitates towards peers who also know themselves and embrace their own power.

Three words for you: I am ruination.

She knows how to be ruthless.

Sometimes she regrets it and sometimes she doesn’t, but Alina understands you can’t make an omelet without breaking some eggs.

Any other Alina Starkov fans out there? What do you love about her?