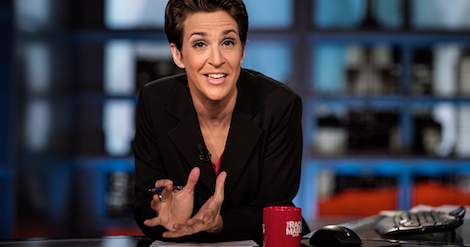 In the new YA novel Dear Rachel Maddow, the only thing that is reliable in Brynn Haper’s life is the titular television presenter. Brynn watches her compulsively, and when she gets a reply email from Rachel as part of a letter writing assignment in her class, Brynn starts to write draft emails to Rachel.

These emails chart her life with her abusive stepfather, her breakup with her girlfriend, her job at a lingerie shop, and her foray into high school politics. 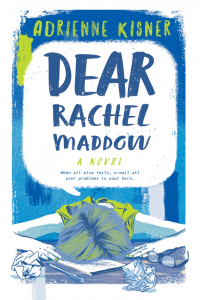 When Brynn’s ex-girlfriend and her enemy Adam join the political arena as well, Brynn takes her role more and more seriously, fighting to be the voice of the people in a world where “the people” are generally voiceless.

Dear Rachel Maddow is one of the funniest and sharpest YA novels I’ve read in a very long time. So I was very excited to sit down with author Adrienne Kisner to discuss it.

Lucas Maxwell: In Dear Rachel Maddow, Brynn is a reluctant hero throughout the novel; often pessimistic, yet you can see a faint spark of hope in almost everything she does. Was this your intention or was she a more positive character when you started out?

Adrienne Kisner: I didn’t ever think of her as pessimistic. I think she’s a realist.  For years, her life has been disappointment and loss.  There is no compelling evidence that things can be that different.  Her favorite thing to do is watch the national news, so this reinforces the idea that Things Are Bad and Don’t Change.  Because of this, she tries desperately not to care and fails every time.  She still puts herself out there with her whole heart.  In writing her, this is always who she was.  To me, she was always relentlessly hopeful.

LM: Allowing Brynn to communicate to the reader via unsent emails means that she can be unfiltered. Do you have a cache of drafts that are rants about the injustices in your life, or is this just something I do?

AK: Oh I have many. I text a lot of them to my poor friends.

LM: Was Brynn’s high school experience similar to yours? Did you feel tremendous pressure to take on things you felt were unjust? 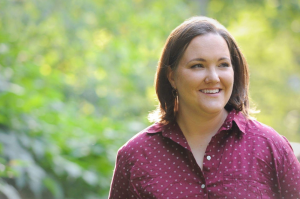 AK: I had a much better support system than Brynn, so I had a much easier shot at things. But I felt drawn to try to change the world.  I wasn’t very good at it.  I was awkward and nervous most of the time.  But I’d convince my mom to have backyard carnivals to raise money for causes, and I was on the school paper through college. Like Brynn, I always saw the free press as a muse.

LM: The character Lacey says she hates it when people call her brave because she has a disability. She says “…as if my mere existence is some sort of war. It’s not. I don’t think I’m any braver than another person just trying to live life. I just can’t do stairs.”  We often unconsciously define people by a disability. What impact do you think this has on teens in particular?

AK: I don’t think I am qualified to speak to the experience of a teen with a disability per se. But! I can say that I know what it is like to be “othered” in some way. And that sucked. You can feel so alone, amidst an already fraught time when so many things seem stacked against you. I think the fortunate find a way out. They find either through real people or through books that they aren’t alone. We’re all just out here, trying to find our people in one way or another.

LM: Mr. Grimm is one of my favourite characters. He tells Brynn at one point that there is no shame in doing something that doesn’t require a university degree. It touches upon the idea that creative people often give up on their dream because of the perception from people around them that their dream is a waste of time. Do you agree with this, and did you struggle with this at any point in your life?

AK: I admit, I am all about having a day job. Or four. I am also one who spends too much time accumulating degrees. For what? Knowledge? I think so. But I still think I’m also trying to prove that I can do it. I was made to feel stupid and small by mean people growing up and should I be over that by now WHY YES I SHOULD. But those people were also a gift, because it instilled in me a work ethic, and a “kiss my ass” attitude that keeps me writing in the face of those who call it a waste of time. Keep writing, and painting, and creating, young artists! Do NOT give up, your dream is NOT stupid. But maybe also consider being a barista, because artists still have to pay the bills. There is great creative freedom in knowing that rent is covered.

LM: There is a hopeful futility to Brynn’s unsent emails in Dear Rachel Maddow, which I feel partially encompasses her character. Did you start out with Rachel Maddow in mind and work from there, or did Brynn’s need to connect to someone on a different level evolve over time?

AK: Rachel was the inspiration from the beginning. Brynn emerged out of, “Who would write to her as a celebrity hero?”

LM: Brynn’s foray into school politics was hilarious and exciting from my point of view. How much do you feel Dear Rachel Maddow reflects actual U.S. politics? For example, Brynn getting involved in the campaign, making promises, trying to be “of the people” yet not really fitting in at the same time?

AK: I don’t know anyone who feels they fit in. This might be the circles I travel in, but Brynn’s outsider status makes her much more accessible than the peers with social capital. I think it’s a little scary how politics in high school mirror politics at national levels. If there’s anything I borrowed from real life, it was the voter suppression tactics. I hate that.

LM: Dear Rachel Maddow has both romance and comedy in it, but I don’t consider it a romantic comedy and wouldn’t pitch it that way to our students. How conscious were you in writing a book with relationships that translated as realistic, considering many YA novels (in my opinion) fail miserably at this?

AK: In all things, I hope I’m being realistic. I have quite the store of beautiful but awkward life experience to draw from. I am good at remembering words, all words written or spoken, the way people say them, their context. I try to draw from that for my characters. I’m relieved to hear that I might have done right by them!

LM: Brynn has an up and down relationship with journalism in her school, yet deep down the reader knows she has loved it all along. She gets involved with it when she knows she has to, when faced with injustice. Do you think the current political climate in the U.S., which many feel is unjust, has been a shot in the arm for political and social journalism, or has it stifled it even further?

AK: I think truth might be an endangered species. The free press, the institution that preserves access to truth, is in peril. We have at the highest levels people who want power unchecked. They are willing to degrade the foundations of our democracy to get it. They sow distrust in the media, and delight in spreading falsehoods, because it is much easier to gain power in secret. “There is no truth,” they say. That is a clever, dangerous trick and it’s working. I think because of this current climate, the free press is that much more essential. The fight to report what is happening is essential. That must be exhilarating, to be a kind of superhero fighting to save the world. On the other hand, being a superhero is a tough road, not for the faint of heart.  Everyone write to your favorite journalist who you think is trying to actually be unbiased. They might need the pick-me-up.

LM: Finally, and I ask this of every author I interview: You have been sucked into the television set for some reason and get to choose to live with a TV family. The only catch is, you have to live with them…forever! Which family would you choose?

AK: Well. I mean. The MSNBC family, obviously.  Did I cheat on this question?  I don’t care. I could be the plucky, side-kick cousin to Joy Reid, Chris Hayes, Rachel Maddow, Lawrence O’Donnell and Brian Williams. I’d be so good in that role.