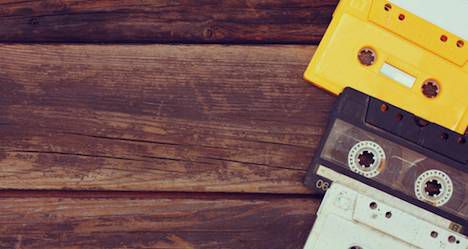 I imagine I don’t have to convince anyone reading this article that it’s wonderful to be told a story. After all, this in one of the primary methods in which we regale one another with information every day. We share weekend anecdotes basking in the malodorous aroma of the workplace microwave, read books aloud to our children in wacky voices, and, in more recent history, get hooked on podcasts and audiobooks.

Audiobooks are seeing a resurgence as of late. Due to convenient advances in technology it’s become much more practical to listen to a story on your daily commute, while you’re making dinner, training for a triathlon, or indulging in a shower beer. More plainly, audiobooks have the ability to integrate into our busy lives. Whereas some people feel anchored by print, audiobooks give you the leeway to wiggle around a bit.

The production value of audiobooks has also increased, with a plethora of celebrities taking the time to narrate more popular works. More than ever we are being told stories by voices we recognize. It’s neat to say the least.

(A random aside: the power of a familiar voice is incredibly interesting. I read The Dinner by Herman Koch in a weekend after watching a movie starring Tom Selleck. Consequently, I heard Magnum’s voice in my head from page one.)

For fans of print (I fall into this camp), remember, it’s not as if consumers have to stick solely to one medium. For example, Audible has a system to pick up an e-book exactly where a user stopped listening to the audio, so that readers can comfortably shift between these modes and enjoy a story seamlessly throughout the day. Audiobooks simply meet the needs of busy people and also play on one of our most basic desires to aurally process information.

So how did this medium arise? Here’s a quick history:

The phonograph was invented by Thomas Edison. Dude was not the first to record sound, but made it possible to listen to a reproduction of the recording. Alexander Graham Bell made some practical improvements, as old-timey inventors are wont to do. This is a year or so after the telephone was invented. Needless to say, these guys were big on finding better ways to communicate.

Early records could only hold a few minutes of audio, so orating an entire book was still impossible. However, the amount of time did allow for children’s verses and poetry.

The Library of Congress invested in the “Books for the Adult Blind Project.” Early recordings included readings of Helen Keller, The Bible, O. Henry, and Edgar Allen Poe. Since many soldiers sustained eye injuries during WWI, and later WWII, there was a continued focus moving forward to provide veterans and other visually impaired Americans with access to books in audio form. The U.K. invested in similar programs around this era as well.

The G.I. Bill passed near the end of WWII and ensured that veterans were given stipends to pay for college education. To help newly blind soldiers, the New York Public Library’s Women’s Auxiliary, spearheaded by Anne T. MacDonald, developed Recording for the Blind. The organization set up a studio to record textbooks passages for veterans and others who needed access to recordings for education.

Caedmon Records produced one of the most well-known early audio recordings – a reading by Dylan Thomas. Side A included a collection of his poems, while the B side held a recording of A Child’s Christmas in Wales. Caedmon Records was created by two recent college grads, Barbara Holdridge and Marianne Roney, who went on to record readings by Eudora Welty, T.S. Eliot, and William Faulkner, according to NPR.

In speaking with NPR, Holdridge notes, “We did not want to do a collection of great voices or important literary voices. We wanted them to read as though they were recreating the moment of inspiration. They did exactly that. They read with a feeling, an inspiration that came through.”

Today, Caedmon is part of HarperCollins.

Audiocassettes are invented! They are unanimously adapted as the bright future of audiobooks (still called “talking books” at the time). These become the bees knees and the medium grows in popularity.

Once CDs make it big, bestsellers get recorded on audio left and right. Audiobooks become the perfect roadtrip entertainment but are clunky and impractical for carrying around day to day unless you’re a determined middle schooler with a Walkman and a dream.

We have a wealth of technology and enjoying audiobooks through newfangled smartphones is easy as pie.

I hope you all imagined mustache superstar Tom Selleck reading the second half of this article like it was a commercial by the Florida Department of Citrus.