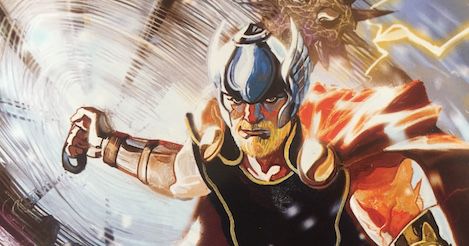 BE YE WARNED: Ahead lie spoilers for the end of The Mighty Thor and also for Thor, issues 1–3.

I’m still mad about Jane Foster no longer being Thor. There was much fanfare when it was announced in 2014 that a woman would become Thor, but also a lot of skepticism that this was temporary and Marvel would eventually return the hammer to the original Thor, going back to the Marvelverse’s normal status quo.

This elicited a bunch of protestations from Marvel: “no, she’s not girl-Thor, she’s Thor” for example, and “this isn’t a temporary thing” which seemed pretty disingenuous when Jane’s arc set her up for a finite run as Thor.

So I was mad—but not surprised—when Jane’s run ended. I was also mad that my comic shop automatically put a copy of the new Thor by Jason Aaron and Christian Ward in my box a few months ago, featuring the Odinson. I made a face, and thought of yelling I SAY THEE NAY, but I didn’t have a lot of books that week, so I bought it anyway. Whatever, I’ll cancel next month, I said.

But then I read it and, grudgingly, enjoyed it. Now I’m three issues in and I’m really looking forward to the next one.

Don’t get me wrong—still irritated that Jane’s not Thor. I may die mad about it, I’ve accepted that, but in the meantime, I am enjoying the Hel out of the new series.

1. Odinson is still not worthy.

This is not a “Odin’s Beard, I am worthy again!” comic. Homeslice still can’t lift his hammer because after the last series, there is no hammer. Right now he’s making do with a series of ridiculous trick hammers that make him seem more like the Green Arrow than Thor. Do you think the dwarves will make him a boxing-glove hammer? I hope so because…

2. This Thor is really leaning into the Thor: Ragnarok wackiness.

The font on the cover alone should have told me this book would be going full Taika Waititi. But good lord, it’s so much fun. How much fun? Here’s an example: 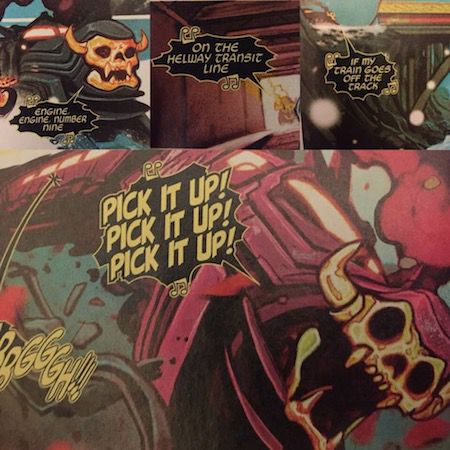 3. This Thor is also embracing the bonkersness that is Norse mythology. 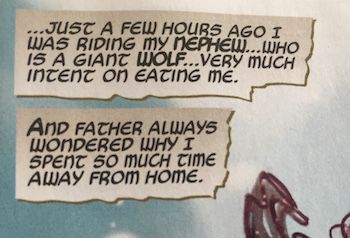 If you only know Hela from the movie, she is not the big sister of  Thor and Loki. She’s Loki’s daughter. And her giant wolf, Fenris, isn’t her pet—that’s her brother. Like many gods, Loki has some weird kids, and the comics have included them, but it’s always fun to see them. Especially since I doubt Loki’s eight-legged horse son is ever going to be shown in a movie.

As you’ve probably guessed, Loki is back. But other Odinsons are getting into the game, too—like Baldur and Tyr. As are some Odingrandkids. But wait, you say, aren’t they dead? OH THEY ARE, but it doesn’t matter because…

5. You don’t have to stick to living characters when your story’s set in Hel.

Yup. Half the characters are dead and it doesn’t matter because the action is taking place in a world completely populated by dead people. Anyone could show up. And does it even matter if people die in this comic? What are the stakes? Who even knows? 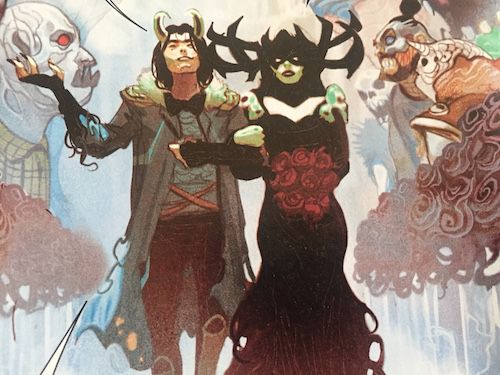 Why, yes, that is Loki, walking his daughter Hela down the aisle to marry her uncle Baldur who usurped her as king of Hel, while her other uncle Thor stands as best man in front of a congregation of zombies. Is it the worst royal wedding? The best? It’s complicated. 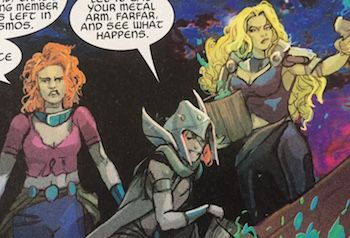 If you still miss Jane as Thor, like I do, there are still goddesses of thunder in this book, although they’re part of a different storyline, and their feature appears in the back of only some issues. I was happy to see Attli, Ellisiv, and Frigg—Thor’s granddaughters from the future—saving a space shark in a feature at the back of Thor #1.* Their bickering is all the good things about the Thor/Loki relationship with none of the stabbiness, and it’s fun to watch them torment their grandfather, who has turned into a kinder, gentler version of his own father. Their storyline is kind of dark, but they are a delight and I hope to read more about them.

Jane has finally accepted her chemo treatment, and is also helping Freya and Roz Solomon get the refugees from Asgardia settled into a building on Midgard…in the Bronx. It’s good to see her, and she’s just as annoyed about not being Thor anymore as we are. And that’s something.