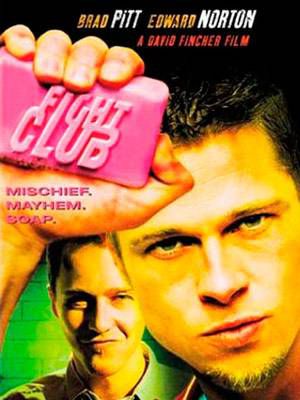 If book people were going to pick a mantra, a good candidate would be, “the book is always better than the movie.” Except that’s not true. There are some books that provided a style, a plot line, or an atmosphere, but that were executed in a more interesting, unpredictable, or entertaining way on screen. While it might seem sacrilegious to my fellow readers, I present without apology my selections of movies that were better than the books:

1. Fight Club. While both the movie and the book screamed NIHILISM FOR TEENAGERS, Edward Norton’s narrator was a million times more believable than the narrator in the book. And Brad Pitt! Look at him go! Helena Bonham Carter took a pretty flat character from the book and fleshed her out in a great way.

3. Little Women. I know, I know. How could I. But the book is so saccharine. It’s a million-little-pink-packets-of-Sweet-N-Low more saccharine than the movie. The movie version removes some of the gag-me sweeter elements, and adds Christian Bale. Win.

4. The Princess Bride. The book is funny, but it’s a brand of dead-pan humor that I think translates better when you can see the person’s face. The movie is so much funnier, mostly because of Billy Crystal. G’BYE BOYS! HAVE FUN STORMING THE CASTLE!

5. The Help. The novel got a lot of flack for being condescending toward the black characters, which I didn’t notice while reading it, but can see in retrospect. But inject Viola Davis and Octavia Spencer into the mix, and there’s no amount of dialect that could take away the dignity of those characters. They gave the movie more gravitas than the book- which, considering the subject matter, was needed.

And here are a few more movies that are better than their novel counterparts, according to Twitter:

Did we miss any?