Everyone has dealt with food issues at some point in their life. This isn’t my humble opinion. It’s a consensus. And it’s no longer a hush-hush topic the way it was decades ago. Eating Disorders and Disordered Eating (yes, they are two separate issues) plague a large majority of the population. Food issues don’t discriminate when it comes to gender, age, or sexuality. The facts are discouraging, but there is hope.

As someone who cherishes YA fiction, I’m always grateful to discover novels that deal with various types of Eating Disorders. I’ve had my share of issues, and fiction was the first place where I recognized myself in characters struggling with similar problems. I’ve found strength in novels that are brutally honest, without glamourizing or fetishizing food and body issues. It’s scary to talk about, but reading these books have helped me to realize that no one is alone. 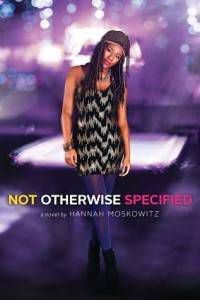 NOT OTHERWISE SPECIFIED by Hannah Moskowitz

Etta struggles to fit in in every area of her life. Not gay enough, not white enough, not thin enough. Weight-restored after struggling with her body for years, Etta attends therapy group as she embarks on the brave transition back to a “normal” life. Though, clearly, there’s no such thing as normal.

I loved this book because it’s told from the point of view of a young girl who is trying to piece her life back in a world where food and body image triggers are everywhere. Etta’s resilience is truly inspiring, and will resonate with anyone feeling iffy about recovery. And I give major props to Hannah Moskowitz for writing about EDNOS (Eating Disorders Not Otherwise Specified), because Eating Disorders are far more complicated than simply eating too much or not eating enough. 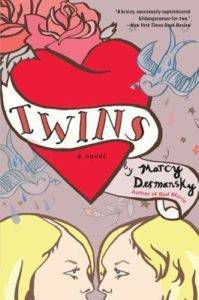 Thirteen year-old identical twins Chloe and Sue may look the same, but they’re nothing alike on the inside. As they grow older, issues of codependency flare up. For Sue, her attempts to control manifests itself in Bulimia. And because they share everything, she introduces Chloe to binging and purging. As the novel progresses, the twins’ relationship is threatened, and a lack of parental supervision leads to even more destructive behavior.

Twins is a super dark comedy. I was thrilled to discover it after reading Dermansky’s latest book: The Red Car. She writes the most realistic portrayal of Bulimia that I’ve ever encountered in Young Adult literature. It’s a painful journey, but the recovery is there. As with any illness, sometimes it needs to get really, really bad before it can get better. 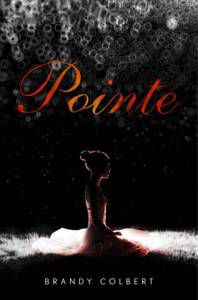 Things are looking up for Theo. She’s eating again, and she has a promising ballet career in her future. Finally, things are back to normal. But when her former best friend Donovan returns home after being abducted four years ago, painful memories arise. Theo is forced to face the truth of the events leading up to Donovan disappearing. But unearthing buried secrets quietly trigger Theo’s Anorexic behaviors. Who is she protecting, and what will it cost her to finally tell the truth?

Pointe completely took me by surprise. I picked it up expecting a familiar story about the cutthroat world of ballet (because, okay, that’s one of my guilty pleasures). Instead I found refreshingly thrilling and inspiring story about one girl’s courage to save her own life. I was in tears by the end of this book. I was even moved to reach out to the author to thank her, which I rarely do. Actually, I thanked all of the authors included in this list.

And while I wholly believe that art saves lives, it’s not a cure all. Please visit the National Eating Disorder Awareness website if you or someone you know is struggling. And don’t be afraid to speak your truth. It is possible to find freedom from your Eating Disorder.