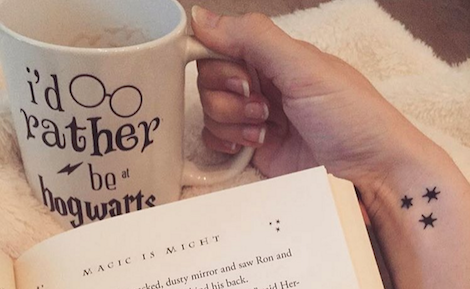 It would be very hard to argue that Harry Potter has not had a hugely significant impact on the world in the 20 years since the first book was released. That story so captured the imagination of readers that people attended midnight release parties for each new title. They lined up up to see all eight movies. They cosplayed their favorite characters. They grew up and had Harry Potter-themed weddings. Their kids have nurseries that are obviously designed to prepare them for their eventual admission to Hogwarts.

And there are more than a few of us that have been so affected by the story that we carry a permanent reminder of it wherever we go. I got my Deathly Hallows tattoo in January 2016, many years after I had read the last book in the series (for the first time), and now I always have a reminder of what it meant to me.  I’m not the only one.

In honor of 20 years of Harry Potter, here are 20 Potter-esque tattoos from the Instagram archives. If you’ve got #HPInk we want to see it! Post it on social media with the #HPInk tag.

Thanks @aliciaa_in_wonderland ! **if any of you have DM'ed me your tattoo pic over a week ago and haven't seen it posted yet, send it to me again! 🙂 some of them have gotten lost in the shuffle and I want to make sure I get a chance to see everyone's!

Seriously in love with this one! Thanks for sharing @juicypeach84 done by artist @bexlowetattoos

We all need a strong patronus to fight all the negativity in the world. Tattoo by @mikeadamstattoo. Tag your tattoos using #hogwartstattoo and @hogwartstattoo.

Great photograph, love the meaning behind this Harry Potter tattoo✨ thanks for sending in @marleyp2

Thanks for sending in!!!! @patrickmduggan666_tattooer

This. Is. Amazing. @dannyscotttattooartist you're so talented!!

Hell yeah he is? Too bad this wasn't in the movies

I truly cannot get over how incredible this one is. Whoever had this idea is genius!

"Happiness can be found in the darkest of times, if one only remembers to turn on the light" .. Ahh beautifully inscribed @ohiomambo .. Thanks for sharing love⚡?#photooftheday#tattoooftheday#harrypottertats#potterheads#picoftheday#instapotter#dailytat#tattoos#beastmode#badass#artwork#designs#instatat#inked#instaink#dailyink#tattoolovers#inkedup#harrypotter#potterlove#pottermore#shoutout#followforfollow#instaaddict#instafans