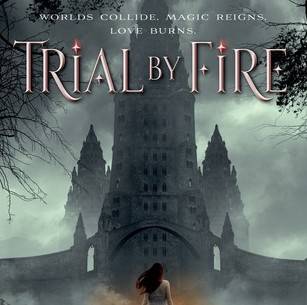 This giveaway is sponsored by Trial By Fire by Josephine Angelini. This world is trying to kill Lily Proctor. Her life-threatening allergies keep her from enjoying experiences that others in her hometown of Salem take for granted, which is why she is determined to enjoy her first high school party with her best friend and longtime crush, Tristan. But after a humiliating incident in front of half her graduating class, Lily wishes she could just disappear.

Suddenly, Lily is in a different Salem—one overrun with horrifying creatures and ruled by powerful women called Crucibles. Strongest and cruelest of them all is Lillian . . . Lily’s other self in this alternate universe.

What makes Lily weak at home is what makes her extraordinary in New Salem. In this confusing world, Lily is torn between responsibilities she can’t hope to shoulder alone and a love she never expected.

For this giveaway, we asked you for your favorite novels featuring witches and witchcraft and you responded in droves! We’ve got a great-big-not-small round-up of over 75 novels about ladies with powers (some real, some imagined):

Sorcery and Cecelia or the Enchanted Chocolate Pot by Patricia C. Wrede and Caroline Stevermer

Which Witch? by Eva Ibbotson

The Witch at Blackbird Pond by Elizabeth George Speare

The Queen of Tearling by Erika Johansen

the Discworld series by Terry Pratchett

The Witch’s Boy by Kelly Barnhill

The Lion, The With and The Wardrobe by C.S. Lewis

The Secret Circle by L.J. Smith

The Heart of a Witch by Judith Hawkes

Dorrie and the Witchville Fair by Patricia Coombs

Silver is for Secrets by Laurie Faria Stolarz

The Witch’s Daughter by Paula Braxton

50 Ways to Hex Your Lover by Linda Wisdom

Dorrie and the Blue Witch by Patricia Coombs

The Accidental Sorcerer by K.E. Mills

The Book of Shadows by James Reese

The Wednesday Witch by Ruth Chew

A Witch Central by Debora Geary

The Hounds Of The Morrigan by Pat O’Shea

Mark of the Witch by Maggie Shayne

The Daylight Gate by Jeanette Winterson

Witch and Wizard by James Patterson

Dance Upon The Air by Nora Roberts

The Night Strangers by Chris Bohjalian

A Break With Charity by Ann Rinaldi