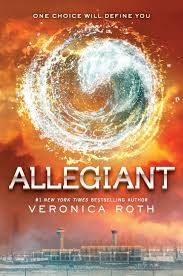 Warning: It’s impossible to write this piece without discussing spoilers for Veronica Roth’s Allegiant, the conclusion to her dystopian Divergent YA trilogy. So if you don’t want Allegiant spoilers, for the love of God, DO NOT KEEP READING THIS PIECE.

The hype for Veronica Roth’s Allegiant (published October 22nd, 2013) has been huge. When it released, it immediately became the #1 selling book in Amazon’s Kindle store, outselling the final book of the Hunger Games trilogy nearly 5 to 1 . To me, the really fascinating data is the initial customer review response to the book. At the time of this writing (the day after the release), the book had 278 customer reviews, with 138 reviews being one-star reviews, and another 33 reviews ranked as two-star reviews. Drama, drama.

The VAST majority of the complaints center around Veronica Roth offing her lead Tris Prior at the end of the trilogy, leaving love interest Tobias AKA “Four” all by his lonesome. The response to this authorial choice is vitriolic. Below, from the one-star reviews:

Honestly, my life sucks enough, without wasting my time and money to read a story that is going to leave me more depressed.

I’ve never wanted to do bodily harm to an author before. If I was to see Ms. Roth on the street right this minute, I’d prob punch her in the throat. Really I would.

Veronica Roth broke my heart..and for what? I will never understand why she did this to us, the readers.

I’ve never been so disappointed in an author in my life.

I WILL NEVER READ ANYTHING FROM VERONICE ROTH AGAIN!!!!

There’s a large swath of fans who are ANGRY, but what fascinates me is WHY they’re angry. This isn’t “I didn’t like this book” anger. This is “You defaced my personal property” anger. This is “You broke into my home and stole my valuables” anger.  It borders on “Annie Wilkes kidnapping Paul Sheldon and forcing him to bring Misery Chastain back to life” anger. It is personal. These fans are legion, and several of the ranks are of the opinion that Veronica Roth owed her fans a happy ending (or at least a protagonist who survives his/her story a la Harry Potter and Hunger Games). Some of these comments read like threats, others read like eulogies. This is reader sociology at its finest. We would be remiss not to make a case study out of the initial Allegiant response.

So the reaction is extreme. This is not just a reaction to a story not going the way readers hoped it would. This is a reaction to the realization that you are powerless in a community you have helped build from the ground up. The fan community is often such a democratic arena, fans can be lulled into a false sense of democracy, but at the end of the day, they don’t really have a vote. If an author has built an empire, she’s allowed to rule that empire as she sees fit. She’s not going to get that much pushback from publishers, nobody shuts the door on that much money. As a fan you may have helped build the kingdom, but it is the author who reigns on high as queen.

So what do we think of this extreme reader reaction? Any reader sociologists out there, any thoughts, any theories?