In honour of Banned Books Week last week, I’ve been reading Laurie Halse Anderson’s young adult novel Speak.  I’m an avid YA reader, but even though this book has been out for about a decade, I’d never picked it up. I always kind of felt like because of the controversy, I’d already read it.

The controversy around Speak is voluminous: it deals with rape.  And teenagers.  And the perpetrator isn’t a creepy stranger or an adult family member.  Victim and victimizer here are both high school students.  The impact on the victim is profound.  The book pulls few punches and is emotionally raw.  You should read it.

Speak is often singled out as one of those “dark” books for young people, full of things they 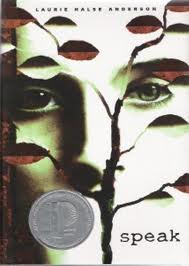 shouldn’t be reading or asking about or examining or thinking about.  The idea that kids today read too much darkness isn’t a new conversation; most recently, the hornet’s nest was kicked by Megan Cox Gurdon at the Wall Street Journal, who this summer angered so many in the YA community with her sweeping dismissal of the role of anger, violence, pain, drugs, sexuality, and trauma in YA fiction.  She finds current YA fiction lurid.  She demands brightness.

There have been many eloquent and thoughtful responses to Cox Gurdon across the blogosphere, and this post isn’t intended to be a restatement of those.  (The conversation is ongoing, as a hashtag search of #yasaves demonstrates.)  But with Speak heavily on my mind, I’ve been talking lately to my first-year children’s literature students about what they think of the darkness in literature for children.  (Incidentally, it’s not that new.  We’re covering Anne of Green Gables this week and next — published in 1908, so much of Anne’s behaviour and identity is rooted in her traumatic past.)  What has struck me in these casual conversations with students is how easy it is to draw a line between my younger and older students; those who were teenagers most recently have no trouble understanding the need for discussions of difficult subject matter.  The further students get away from childhood, though, the more they seem to want to romanticize that period of life; the effect seems to redouble for students with children of their own.

Of course this isn’t a blanket statement, and obviously compelling, disturbing YA books are written most frequently by adults.  But I think much of our cultural discomfort with the idea of dark children’s novels emerges from a place of nostalgia about our own childhoods.  Because kids today aren’t drastically different than previous generations.  But if we perceive, culturally, that childhood is a protective bubble, it’s hard to reconcile that idea with the sense that enough bad stuff gets in the bubble that kids need to hear these kinds stories.  And sometimes it’s easier to preempt the conversation.

So books like Speak get banned and challenged a lot.  But the resulting publicity means they also get read a lot.  And while adults wring their hands about the state of fiction for young people, those young people are out buying, borrowing, reading, and talking about the very books we trouble ourselves about.  And maybe that’s the ultimate Defence of Darkness: if they need it, they read it.  We just have to keep it on the shelves in case they decide to go looking.

Sign up for What's Up In YA? to receive all things young adult literature.
Thank you for signing up! Keep an eye on your inbox.
By signing up you agree to our Terms of Service
#Young Adult Literature#leslie false anderson#speak