This week’s Riot Recommendation is sponsored by TryAudiobooks.com. 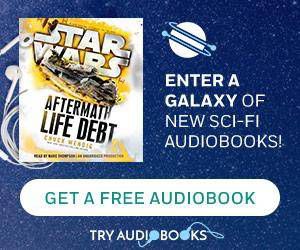 Looking for something new to listen to?  Penguin Random House Audio is always working hard to record new sci-fi audiobooks for you – and this year will not disappoint!  From Star Wars Life Debt: Aftermath to Dark Matter to the finale to Justin Cronin’s trilogy, The City of Mirrors, there is something to satisfy any intergalactic preference.  Visit TryAudiobooks.com for a free audiobook and start listening!

We asked you to share your favorite science fiction audiobooks were and you answered. We’ve included the audiobook reader alongside the title and author as well.

Grab your headphones, crank up the volume, and get your listening on.

Binti by Nnedi Okorafor as read by Robin Miles

Bird Box by Josh Malerman as read by Cassandra Campbell

The Collected Stories of Philip K. Dick (5 volumes) as read by Jeff Cummings

The Fireman by Joe Hill as read by Kate Mulgrew

Ready Player One by Ernest Cline as read by Wil Wheton

The Regional Office Is Under Attack! by Manuel Gonzales as read by Sarah Scott, Natasha Soudek,Susan Hanfield, and Mike Chamberlain

Shades of Grey by Jasper Fforde as read by John Lee

Sleeping Giants by Sylvian Neuvel as narrated by a full cast

The Windup Girl  by Paolo Bacigalupi as read by Jonathan Davis