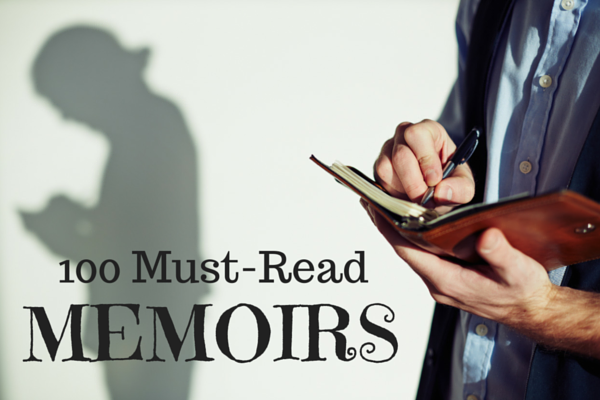 I know quite a few readers who credit reading a memoir as their gateway into other nonfiction. While I certainly love memoirs for that, it’s also a genre that stands well on it’s own. A great memoir takes a reader into a different world, bringing them along as the author faces struggles big and small. Memoirs can make you laugh, cry, think and yearn to explore new ideas.

I thought I was pretty well-read when it comes to memoirs, but as I put together this list of 100 must-read memoirs, I realized the explosion of the genre of late has left me with a lot of catching up to do.

Although the memoir can trace history back as far as St. Augustine and his Confessions, I decided to focus this list around contemporary memoirs – those written within the last 100 years, with a pretty heavy skew towards those from the last 20 years.

If you’re curious about the history and evolution of memoir as a genre, I can’t recommend Memoir: A History by Ben Yagoda enough. With that, on to the list!

Dust Tracks on a Road by Zora Neale Hurston (1948)

Paper Lion: Confession of a Last-String Quarterback by George Plimpton (1966)

Coming of Age in Mississippi by Anne Moody (1968)

I Know Why the Caged Bird Sings by Maya Angelou (1969)

The Woman Warrior: Memoirs of a Girlhood Among Ghosts by Maxine Hong Kingston (1976)

Autobiography of a Face by Lucy Grealy (1994)

The Color of Water: A Black Man’s Tribute to His White Mother by James McBride (1995)

A Heartbreaking Work of Staggering Genius by Dave Eggers (2000)

Kitchen Confidential: Adventures in the Culinary Underbelly by Anthony Bourdain (2000)

First They Killed My Father: A Daughter of Cambodia Remembers by Loung Ung (2000)

Don’t Let’s Go to the Dogs Tonight: An African Childhood by Alexandra Fuller (2001)

She’s Not There: A Life in Two Genders by Jennifer Finney Boylan (2003)

Reading Lolita in Tehran: A Memoir in Books by Azar Nafisi (2003)

Lipstick Jihad: A Memoir of Growing up Iranian in America and American in Iran by Azadeh Moaveni (2005)

The Glass Castle by Jeannette Walls (2005)

The Year of Magical Thinking by Joan Didion (2005)

Garlic and Sapphires: The Secret Life of a Critic in Disguise by Ruth Reichl (2005)

I Feel Bad About My Neck: And Other Thoughts on Being a Woman by Nora Ephron (2006)

A Long Way Gone: Memoirs of a Boy Soldier by Ishmael Beah (2007)

Falling Leaves: The Memoir of an Unwanted Chinese Daughter by Adeline Yen Mah (1997)

The Center Cannot Hold: My Journey Through Madness by Elyn R. Saks (2007)

The Diving Bell and the Butterfly Jean-Dominique Bauby (2007)

The Sharper the Knife, the Less You Cry: Love, Laughter and Tears at the World’s Most Famous Cooking School by Kathleen Flinn (2007)

Dreams from My Father: A Story of Race and Inheritance by Barack Obama (2007)

Look Me in the Eye: My Life with Asperger’s by John Elder Robison (2007)

One Drop: My Father’s Hidden Life — A Story of Race and Family Secrets by Bliss Broyard (2007)

In the Sanctuary of Outcasts by Neil White (2009)

Mennonite in a Little Black Dress: A Memoir of Going Home by Rhoda Janzen (2009)

Let’s Take the Long Way Home: A Memoir of Friendship by Gail Caldwell (2010)

The Boy Who Harnessed the Wind: Creating Currents of Electricity and Hope by William Kamkwamba and Bryan Mealer (2010)

Lonely: Learning to Live with Solitude by Emily White (2010)

Hiroshima in the Morning by Rahna Reiko Rizzuto (2010)

Orange is the New Black: My Year in a Women’s Prison by Piper Kerman (2010)

Blood, Bones and Butter: The Inadvertent Education of a Reluctant Chef by Gabrielle Hamilton (2011)

This Life Is in Your Hands: One Dream, Sixty Acres, and a Family Undone by Melissa Coleman (2011)

Tolstoy and the Purple Chair: My Year of Magical Reading by Nina Sankovitch (2011)

Is Everyone Hanging Out Without Me? (And Other Concerns) by Mindy Kaling (2011)

Why Be Happy When You Could Be Normal? by Jeanette Winterson (2011)

House of Stone: A Memoir of Home, Family, and a Lost Middle East by Anthony Shadid (2012)

Wild: From Lost to Found on the Pacific Crest Trail by Cheryl Strayed (2012)

Full Body Burden: Growing Up in the Nuclear Shadow of Rocky Flats by Kristen Iversen (2012)

One Hundred Names for Love by Diane Ackerman (2012)

Brain on Fire: My Month of Madness by Susannah Cahalan (2012)

Heads in Beds: A Reckless Memoir of Hotels, Hustles and So-Called Hospitality by Jacob Tomsky (2012)

Do You Dream in Color? Insights from a Girl Without Sight by Laurie Rubin (2012)

Does Jesus Really Love Me? A Gay Christian’s Pilgrimage in Search of God in America by Jeff Chu (2013)

I Am Malala: The Girl Who Stood Up for Education and Was Shot by the Taliban by Malala Yousafzai and Christina Lamb (2013)

An Astronaut’s Guide to Life on Earth by Col. Chris Hadfield (2013)

Out With It: How Stuttering Helped Me Find My Voice by Katherine Preston (2013)

Just Mercy: A Story of Justice and Redemption by Bryan Stevenson (2014)

Delancy: A Man, a Woman, a Restaurant, a Marriage by Molly Wizenberg (2014)

Smoke Gets In Your Eyes: And Other Lessons from the Crematory by Caitlin Doughty (2014)

Without You There Is No Us: My Time with the Sons of North Korea’s Elite by Suki Kim (2014)

The Lonely War: One Woman’s Account of the Struggle for Modern Iran by Nazila Fathi (2014)

It’s What I Do: A Photographer’s Life of Love and War by Lynsey Addario (2015)

Hunger Makes Me a Modern Girl by Carrie Brownstein (2015)

Hold Still: A Memoir with Photographs by Sally Mann (2015)

Blackout: Remembering the Things I Drank to Forget by Sarah Hepola (2015)