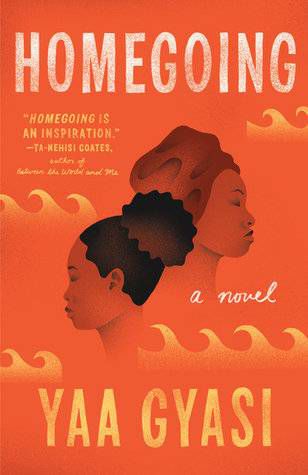 I’m always looking for the next best things when it comes to the books that I’m reading. Something that could possibly replicate the multiple emotions that the Harry Potter series gave me growing up. Something that I can rant and rave about, and tell people that they have to go out and buy it. Recently, my brother told me about a book called Homegoing. He said it was an Afro-centric book and that Alicia Keys was seen reading it on a plane. That’s all I needed to know. Lately, I’ve been focusing my time reading books by black authors and other authors of color, and Homegoing needed to be added to my list. And I have to say, I’m ashamed it took me two years to even realize that this masterpiece existed.

Yaa Gyasi’s debut novel tells the story of two half-sisters from Ghana, one being sold into slavery. Each chapter follows a descendant of both sisters, leading all the way to present day. The story is an emotional rollercoaster, one that had me crying for fifteen minutes after I finished it. The characters go through generational trauma, Gyasi touches upon African elitism towards African Americans, and what it’s like to be connected to something bigger than yourself.  I was immediately drawn to the novel, not just because Gyasi can write her you-know-what off, but because like many African Americans (and characters in the novel), I don’t know much about my lineage. I have family all over the country, and supposedly we can trace ourselves back to a plantation in Virginia. I’ve always wanted to dig deeper into my lineage, but always put it to the side. But Homegoing ignited a fire in me to find out where I come from, to find out if I have family members back on the continent where my ancestors were stolen. There are thousands of different cultures in Africa and I yearn to know which one I belong to. Needless to say, this is a book to share with anyone who will listen. And if they ever make a film adaptation, they better get Lupita Nyong’o on the phone.