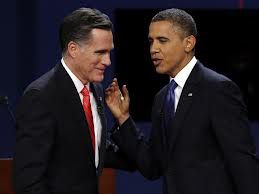 Mitt Romney and Barack Obama’s Facebook pages list their favorite books (or at least what they want you to think are their favorite books). Governor Romney’s list includes East of Eden, The Adventures of Huckleberry Finn, Ender’s Game, and Battlefield Earth (wut?). He’s also been known to cite Jared Diamond’s Guns, Germs and Steel: The Fates of Human Societies and The Wealth and Poverty of Nations: Why Some Are So Rich and Some Are So Poor by David Landes on the campaign trail. President Obama lists Toni Morrison’s Song of Solomon, Moby-Dick (wut?), Marilynne Robinson’s Gilead, Emerson’s Self-Reliance, The Bible, and works by Shakespeare and Lincoln.

While both of these lists are fine, I have a few ideas of my own about what books these two could stand to cuddle (Los Angeles Times has done a list of their own, but theirs is Very Super Serious and mine is, well. Not so much).

Dave Ramsey’s The Total Money Makeover. An easy-to-follow book about moving to an all-cash, heavily budgeted money management system while focusing on paying down your debt. No credit, no extras, no whining about how your spousealsoknownasCongress wouldn’t let you do xyz.

Don Quixote because idealism only gets you so far in these parts.

Robert M. Branson’s Coping With Difficult People, because America will only take “the big bad meanies on the other side of the aisle won’t let me do ‘nuthin” for so long (that side of the aisle represents about half the country, buddy).

Barbara Ehrenreich’s Nickel and Dimed: On Not Getting By in America. 47 percent. Fin.

Margaret Atwood’s The Handmaid’s Tale. While his efforts to purposefully staff women in his cabinet were commendable, it still seems like he’s still not picking up what the ladies are putting down. PICK IT UP, MITT.

Tim O’Brien’s The Things They Carried because while he thinks ending the war in Iraq was “tragic,” a lot of us think that war itself is the tragic thing.

What books would you like to see on the nightstand of these two? Go!