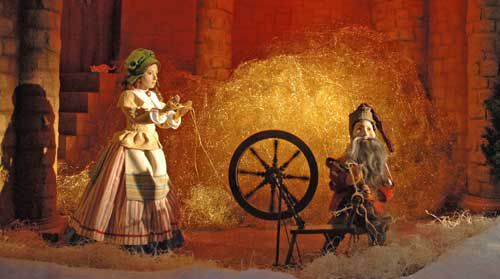 I’ve withheld reading Grimms fairytales to my children thinking they were too scary. My son is scared of mummies and zombies, he says they live in his closet at night; my daughter runs to me when there is the threat of lightning. How would they handle Rumpelstiltskin?

I’ve read nothing else for days. The whirr whirr whirr of that spinning wheel has entranced her. I’ve overheard her playing Rumpelstiltskin in her room with her dolls, whirr whirr whirr she says under her breath as she makes them play out the rapacious King, the Miller’s daughter, and the creepy magical elf.

Read it again, Mom! my son, 7, says. Read about how Rumpelstiltskin wants to take the firstborn in exchange for spinning the straw into gold! He’s fascinated by the language. Firstborn. Spinning wheel. Exchange. The deep woods where Rumpelstiltskin is eventually found, riding around his fire on a kitchen spoon.

It’s me. I’m the one who thinks riding around on a kitchen spoon and having to give up a child and simply the name “Rumpelstiltskin” are terrifying. Just listen to it. All those aspirant Germanic consonants. Far scarier than zombies in the closet.

Lightning at night is a piece of cake to me compared to the Brothers Grimm, and their archetypal Jungian imaginings. The kids take the fairy tale at face value, there are no deeps and seeps in how they read it. When, at the end, Rumpelstiltskin flees on his kitchen spoon after being found out and “is never heard from again” they say, great. And go off to play their games. Whirr whirr whirr. However, I’m left wondering, Where the hell did he go?