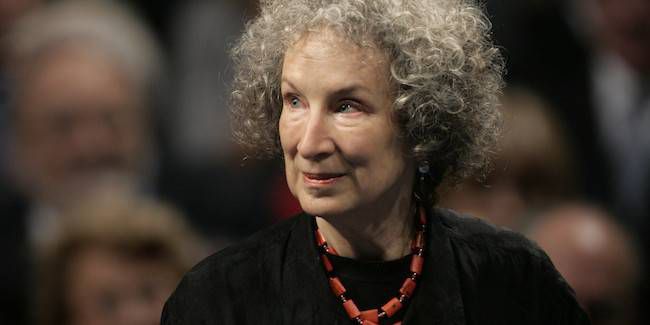 It’s nighttime in Alexandria, meaning the scenes are shot so dark it’s hard to tell what’s going on. Does anyone else have this issue, or just me? Deanna puts a CD called “Run Mix” into a player and starts it while some others sit by somberly. Carol makes a casserole while watching Judith on the baby monitor. This is a horrible song to run to. I actually paused to make sure it wasn’t something else playing nearby, just a really horrible choice or maybe the best choice if you’re a goth kid who wants to get in shape. Reg tears up to the song and asks to stop. Oh I get it now, it’s was one of douchebag Aiden’s CDs, and he’s dead now so people are sad. The doorbell rings to Carol’s abandoned casserole with a condolences note. The note is taken and burned but the casserole is left on the porch. There’s a zombie at the walls but it’s dropped with a shot from the tower. Sasha finally getting her wish? Daryl and Aaron are outside the walls looking for folks, Daryl spots a light in the distance and we enter our credit sequence!

We see a videotape of Nicholas, Aiden’s sidekick, who blames all the deaths on Glen, a narrative Glen contradicts. Who will be believed?! Nicholas is full of passion, Glen is no-nonsense deadpan. Glen is talking to Rick, focusing more on Noah’s death than Aiden’s. Deanna is suspicious of Nicholas’ version, because Nicholas came back with the group even though he’s accusing them of causing Aiden’s death. All supply runs are halted until the investigation is complete. Glen admits to Rick that he nearly left Nicholas out there to die like Aiden, but now that they’re in Alexandria they need to make an honest attempt to integrate and conform.

Carol updates Rick on Dr. Pete’s familial abuses. Sam, Pete’s son, told Carol that his mom installed a bolted lock on the inside of his closet door, where he sometimes has to spend the night listening to them fight. Sam one time found his mom unconscious and bleeding on the floor at night after the noise stopped. Carol wants to know what Rick plans to do about it because he obviously likes her. Carol leaves and Pete ambles up, bad timing Dr. Pete. Rick gives Pete his meanest glare and tells him to “keep walking.”

Michonne wakes up, having slept in her clothes on top of the covers. I like that they’re showing how the group still struggles to get back to life on the “inside.” She gets her uniform out of the hamper as Rosita shows up with an update on Tara, and to tell Michonne that Sasha spent the night in the tower. Abraham is up there now but Sasha still hasn’t come back into town, so they immediately head out to look for her, heading towards a spot Rosita spied her heading to with a rifle before, I’m guessing the photo shooting from two weeks ago? Neither of them have been outside the walls much since they arrived, and it already feels different. They argue a bit about the merits of domestication, but it’s honestly a bit dumb, the main point being Michonne left the walls without her sword, so there’s that.

Deanna mourns quietly in their small cemetery when Rick shows up to talk about Dr. Pete. Deanna knew and hoped him being the shit out of his wife would get better because they can’t afford to lose a surgeon. Rick suggests an enforced separation but Pete may not play along. What happens then? Rick says they’ll have to kill him, Deanna says that’s uncivilized. Rick points out that this is an improvement because at least he gets a warning, Deanna says the worst they’ll do is exile him, which might as well be a death sentence or, as Rick points out, he finds another group and tells them about Alexandria, a fair point. Deanna still won’t hear a thing about executions.

Michonne and Rosita find several zombies killed execution style: bullet to the back of the head. Apparently Sasha is hunting them, which is a problem why exactly? I mean, it’s sort of a waste of bullets, but at least there are fewer zombies about there.

Carl continues to track Enid through the forest, but she’s been onto him for a while because he’s so very loud. She speaks to him from some hidden spot he can’t see, and asks him to go home because he scares her. Carl wants to know what she’s doing out here and she runs off because flirting? If you’re caught up on the comics you might see where this is going. They spot a walker through the trees, Enid throws an egg timer to create a distraction as they run the other way. Enid tells Carl that coming outside to run around helps her remember being out there, and the running feels good. Exercise and endorphins, people, they make a huge difference. Carl wants to know what happened to Enid before arriving at Alexandria, she doesn’t want to talk about it. They hear a big group of walkers and duck into a convenient hollowed out tree where they’re forced to stand sexy close. As the horde shambles by Enid whispers in Carl’s ear, amplifying the teenage sexiness.

Nicholas is cleaning the blood out of the back of his van. Glen shows up to tell him that all the folks that died last episode, including Noah, are his fault because people like him are “supposed” to be dead, whatever that means, and that he’s only alive because of the walls, which he’s going to stay inside from now on. Nicholas immediately heads outside the walls Glen told him to stay inside and digs up a coffee can with a gun in it. Is this Rick’s hidden yet disappeared pistol?

We see a small group of walkers quickly dispatched by Sasha with her silenced rifle. Michonne and Rosita appear right as the last one hits the dirt to confront Sasha and her kind of boring descent into being a bit angrier than normal. She’s tired of playing defense and has no problem taking on every last walker herself. Again, I don’t really see this as a problem. Other than the waste of bullets she is reducing the number of walkers that could find Alexandria, why is this such a cause for concern? After a brief PTSD-like flashback, Michonne and Rosita join the fight. Sure, this puts them in harm’s way themselves, but they’re A) clearly capable, and B) in need of some violent release. Sasha runs out of ammo and is knocked over by a walker which Michonne shoots. Sasha is very upset by this because of drama. In addition to Tyreese and Bob, she’s taking the death of Noah poorly because she told him he wouldn’t make it.

Daryl and Aaron find some freshly dissected walkers with parts missing. Time to track! They find a woman tied to a tree and eviscerated, but it’s unclear to me at least if she was alive when that happened. Daryl claims this is also a recent event. Looking at her face, she also has the W carved in as we’ve seen before.

Rick calls upon Jessie, Pete’s wife, in her art studio/garage. Rick gets straight to the point about her husband’s abuse. Jessie makes excuses, but Rick doesn’t care. Apparently it’s been this way even in the before, and back then they got him help so she claims she can fix it again. Rick is worried he’ll kill her, and he doesn’t want that to happen. She correctly surmises that Rick is so interested in this because he likes her, which upsets her further so she closes the garage door in his caring face. Rick looks around his tranquil community like he’s about to lose it and revert back to crazy-time Rick. I get it Rick, but sometimes you just need to take a deep breath and regroup. He does, and barges back into Jessie’s home, because why wouldn’t an abuse victim appreciate all this aggressiveness from a man with a gun? He tells her that Sam wanted to get a gun to protect her from his own father, and that inside isn’t so different from outside: fight or die. Rick doesn’t want her to die, he wants to keep her safe, but she has to say “yes” to it. She still suspects his motives because how dare he like her! He admits that he wouldn’t go to this length for someone else. Never should have given him that haircut.

She says yes right as Pete walks in. Pete asks Rick to leave, but Jessie says that Pete is the one who has to leave. Rick goes into full cop mode but Pete calls his bluff and takes a swing. They brawl and Rick defenestrates Pete into the street. The fight is savage and the town looks on in horror.

Jessie tries to pull Pete off Rick but he backhands her without a second thought, Rick does the same to Carl. No one comes out of this looking very good. A balloon, which we saw a child holding earlier, floats away. (SIDE NOTE: We’re currently running out of helium in the real world, how on earth did they get some Alexandria? I must know this.)

Deanna finally arrives and ends the fight, Rick responds by pulling a gun on her which is not a smart play. Rick monologues while Sasha drops walkers along the wall from her beloved tower. Rick says that even inside the walls they’re playing it wrong, and that more control over the community is needed.

Deanna agrees which encourages Rick to continue his absurd monologue until Michonne, in her uniform no less, cold cocks him. End of episode.

And what an editing it was! Rick slipped a bit more into crazy mode than I would have liked, but it’ll be interesting to see how his group fractures from here. Michonne seems to have sided with Deanna, which Maggie and Daryl will likely do too. Carol, Sasha, and Carl will all likely stick with Team Rick. Tara is out of the game for now, and I’d say that Eugene, Abraham, and Rosita could go either way, but I’d guess they’ll stick with Rick. Next week is the season finale and the episode is called “Conquer”! What are you hoping to see happen? Let’s talk about our prediction in the comments!