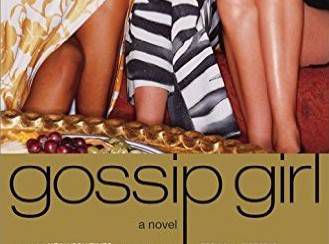 This is a guest post from Chelsea A. Hensley. Chelsea is a writer from St. Louis. She loves chocolate chip cookies, puppies and her Kindle. She often talks too much. You can follow her on Twitter@ChelseaBigBang. 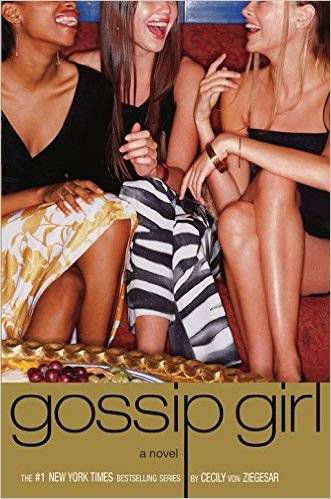 I started reading Cecily von Ziegesar’s Gossip Girl in fourth grade. The other girls in my class joined me, and thus an unofficial book club was born. We rarely spoke about these wildly misbehaving teenagers in New York City, part of some silent agreement that discussing Gossip Girl on the grounds of our not-that-strict-but-strict-enough Catholic school would be courting disaster. We didn’t hide the books themselves as that would have led all those pesky adults to take an inconvenient interest in what we were reading, but we were careful not to draw attention. Our casual exchanges implied nothing out of the ordinary, and our ravenous reading stoked pride in the teachers who saw us. Meanwhile my fingers were strategically splayed to hide a quote from Teen People on the back cover that called Gossip Girl “Sex and the City for the younger set.”

My bookishness got me out of a number of scrapes, including infractions that would have led other students to detentions, notes sent home, stern talking tos with parents, teachers and school administration. Because really, how much trouble could a girl that into books be? My quick consumption of books, my willingness to read and reread, and my love of the bookstore told people I had a good head on my shoulders, was destined for great things, etc. I don’t disagree with these descriptors (hello, look at me now!), but I feared their dissolution if anyone learned I was regularly reading about Nate parting Serena’s Red Sea (an actual sex metaphor found in Gossip Girl). I figured this out early enough to know that I didn’t want to risk losing my Get Out of Jail Free Card or my reading autonomy by letting someone figure out what I was reading. So Teen People’s praise of Gossip Girl was confounding and irritating. What the hell were they thinking putting the word “sex” right there where people’s parents could read it? Didn’t they know that broadcasting Gossip Girl’s casual take on teenage sexuality was going to make it that much harder for me to read it?

I’d never actually watched Sex and the City, but I’d caught glimpses of it when my mom did. One time she ejected me from the room because she didn’t “know what they were going to show” in an episode in which (I later learned) Miranda hooked up with her hot neighbor, played by Blair Underwood. So I knew Sex and the City wasn’t appropriate for a fourth grader, and younger set or not, neither was Gossip Girl. Saturated with sex that was an odd hybrid of “adult” and “kid”, it wasn’t explicit in anything but the characters’ enjoyment of it, their desire to do it with each other, their best friend’s significant others, with strangers, anyone really. There were no wholesome and thoughtful discussions of sex, of puberty, of growing up and having urges. Gossip Girl was sex for fun, for status, for the hell of it, for no reason, and it was everywhere. And I was extremely aware of it. Any passing adult had me immediately shielding pages with even the most minor reference to sexual activity, and I distinctly recall speed reading through a page on which a boldened chapter title read “an hour of sex burns 360 calories.”

Gossip Girl may have been the first sexually licentious YA book I read but it wasn’t the last. I read similarly toned books like the Gossip Girl spinoff The It Girl; West Coast centered The A-List; and The Clique, a series I stopped reading because its characters were too close to me in age and therefore not having sex with their peers. Through all of these, the unofficial book club continued, and everything went smoothly until Confessions of A Backup Dancer was returned to me by a classmate’s dad. I barely remember anything about that book, except for a scene in which the narrator overhears other characters having sex. Afterward one of them announces they’ll “go get a towel.” What this meant I had hardly any idea (my mind still reels from the possibilities), but I knew it was nothing Parent Approved. It was that scene I thought of when this dad returned Confessions to me and told me to “take this book home.” I’ll never know if it was the Towel Scene or the profanity or the casual drug use that caused him to confiscate it, but I smiled cheerfully and said “Okay,” just glad that he wouldn’t be discussing it with anyone who would have lectured me.

It was after this I realized I could probably deal with getting in “trouble.” I couldn’t deal with the talking to that would go along with it. My mom tried to have the sex talk with me once, but I was so uncomfortable I made up an excuse and made a hasty exit. And she was so uncomfortable that she never tried it again. Awkwardness of the conversation aside, I already knew what it would entail. I’d read dozens of books that treated sex as heavy and damning. In The Sisterhood of the Traveling Pants, a series I loved, Bridget Vreeland is eager to lose her virginity, does so and, upon realizing it was a mistake, becomes immediately depressed afterward. Until I’d discovered Gossip Girl and those like it, this outcome was far from rare. I was already being lectured by everything I read, being passed not-so-subtle warnings about the dangers of sex and my inevitable regret if I were to have sex myself. Why talk to anyone about it when I knew what they’d tell me? Gossip Girl made sex fun and natural, and I never feared sex because of it. It took about a decade for that revelation to sink in, for me to be grateful to Cecily von Ziegesar, her ghostwriters and Gossip Girl’s counterparts for giving me a look at sex that wasn’t life-changing (for better or for worse), that didn’t have to be mulled over, debated, and punished.