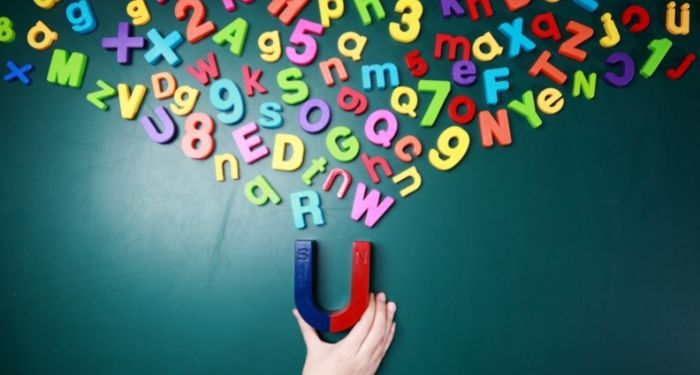 When did you last use a magnetic poetry kit? I recently discovered that magnetic poetry can now be experienced through the magic of the internet. There is something appropriately dramatic about looking at the choppy word salad, words freed from paper prison and stuck to fridge doors alongside family photos and lists of important numbers. The slightly angled word magnets give any text an experimental vibe, and grabbing pre-chosen words allows for inspiration without over-thinking.

Even in its digital format, something about the process just works. Is it a poem or a collage project? Is it taking the easy way out or unlocking your creativity? A magnetic poetry kit gives you the aesthetic of an innovative work of art, but you don’t need to come up with the words yourself.

I used to write poetry when I was younger. Raised on fairytales and romcoms, I was a dramatic thing in my youth, full of idealistic notions of True Love and Big Gestures and Tortured Romance (capitalizations very much intended). Though I never felt like my poetry was especially good, that didn’t stop me from scribbling lovelorn odes into the pages of my notebooks or on the backs of scraps of paper. Eventually, I stopped — after taking poetry writing courses in university and receiving confirmation from the prof that, sadly, it was not a genre of writing where I shone. Since then, the only poetry I’ve attempted has been magnetic and stuck to a fridge and somehow it always makes me feel brilliant. So think of this as both an exploration of magnetic poetry as an item, and an ode to its long-lasting goodness.

The History of Magnetic Poetry

As a ’90s kid, magnetic poetry was everywhere. I don’t remember a time before refrigerator poetry existed, but it turns out that it was 1993. Once upon a time in Minneapolis, a songwriter named Dave Kapell had a fortuitous case of allergies. Listen, magnetic poetry may not have the most hoity-toity of origin stories, but it’s damn good trivia.

In a 2015 interview with Atlas Obscura, Kapell explained how he came up with the first model. One night he was fighting against a bout of writer’s block using the cut up writing technique. He sneezed, and it accidentally blew his paper slips away, jumbling the words. To keep it from happening again, he had the idea to glue the words to magnets. Originally the magnetic slips had their home on a cookie tray; at some point, he moved them to the fridge. Friends loved this, and he thought maybe he had something. Then, according to the lore written on the kits’ official site, Kapell was inspired by his friends’ enthusiasm to try and sell his kits at a craft fair. He sold out quickly, and voila, it had begun.

But let’s back up because some of you might be wondering what the cut up writing technique is.

The Cut Up Writing Technique

It’s a writing exercise that encourages creativity through collaging words together. First, the writer finds an article or work. Once the text is chosen, the writer then cuts the text into smaller pieces of one or two words. It is beloved by artists and writers. One of the first to popularize this method was Tristan Tzara, an avant-garde poet and one of the founding fathers of Dadaism. Tzara wanted to spread his method of poetry writing and created “To Make A Dadaist Poem,” a short list that describes the cut up method in ten steps. According to William S. Burroughs’s essay, “The Cut Up Method,” “At a surrealist rally in the 1920’s Tristan Tzara…proposed to create a poem on the spot by pulling words out of a hat. A riot ensued…”

Burroughs goes on to explain that the next big name to practice the technique was a painter, Brion Gysin, who “cut newspaper articles into sections and rearranged the sections at random.” Burroughs popularized the cut up method and musicians like David Bowie and Kurt Cobain used it to regularly craft their songs.

In terms of Kapell’s inspiration? He began to use the method after watching David Bowie discuss it on TV.

Now, it’s been 29 years since Kapell’s fateful sneeze. You can still buy all sorts of magnetic word jumbles — along with the original, there are kits for kids, in other languages, and on themes like nature, books, and the apocalypse. In the Atlas Obscura article, Kapell explained that the company tries to stay relevant and keep up with popular memes (see their Bacon kit). And while magnetic poetry might not be as ubiquitous as it once was, it did survive major refrigerator reshuffling. According to a 2013 post from Business Insider, homeowners shifting to stainless steel fridges cut Kapell’s business substantially.

Still, it has survived because the appeal remains significant. The cut up style of writing is for everyone regardless of their own perceived skill level. It gives you the words so that you can write and do, as opposed to spending time choosing the “perfect” words. Magnetic poetry made the cut up technique a collective art — so many times I’d write something on a fridge and come back later to find it slightly changed. Its meaning shifted by a word or change in formatting. There has always been something quite beautiful in that, and I think it’s why the kits have endured.