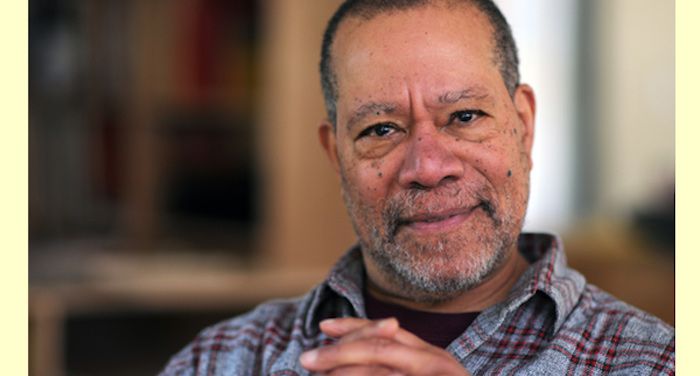 Jerry Pinkney, beloved author and illustrator of over 100 books for children and adults, winner of five Coretta Scott King Awards, a Caldecott Medal, and a Horn Book Award, among many other honors, passed away on October 20, 2021 at the age of 81. His agent, Sheldon Fogelman, confirmed to NPR that the cause of death was a heart attack.

Pinkney’s expressive, thoughtful watercolor illustrations brought to life the words of many famous authors, including Margaret Wise Brown, Barry Wittenstein, Hans Christian Anderson, and Julius Lester, and he illustrated many Bible story retellings. He collaborated with his wife, Gloria, a children’s book author, on Back Home and other stories.

On his personal website, he said that his work was “text inspired” and that the manuscript would provide the clues and direction he needed, but his illustrations perhaps shone brightest in his wordless books. The Lion & the Mouse, wordless except for a few animal grunts and onomatopoeia, retells Aesop’s famous fable. At publication, Kirkus Reviews called the book “masterful” and “unimpeachable” and in 2016, Horn Book called the illustrations “sumptuous.” Indeed, Pinkney’s illustrations don’t require a title on the cover or description copy on the back: the startled mouse on the back and wary lion on the cover convey all a prospective reader need know about the book they’re about to settle into.

Pinkney’s award-winning books were all illustrated in watercolor, but while locked-down due to COVID-19 in his New York home, Pinkney turned to pastels.

“I don’t work in pastels, I’ve never worked in pastels,” Pinkney told School Library Journal in September, 2021. “So the challenge was to take a tool I had not worked with and create these portraits. A pastel for me was always this clumsy stick you held in your hand. I use a No. 6 brush or a No. 2B pencil. Now all of a sudden, I’ve got a piece of chalk in my hand, and it was quite liberating.”

Pinkney asked family members to sit for photos and then used those photos as reference for pastel portraits, but he also drew from life and memory. “Everybody had that gnawing pit in the stomach,” he said. “I was trying to make sense out of people that were around me.”

As the news of Pinkney’s death broke, readers and colleagues took to Twitter to express their appreciation and respect for Pinkney’s life and work. Some shared their favorite illustrations, some shared fond memories of reading his books in childhood or to their own children, and some told stories of his great kindness.

One of Pinkney’s last books was A Place to Land: Martin Luther King Jr. and the Speech that Inspired a Nation. Pinkney’s illustrations accompanied words by Barry Wittenstein. In 2019, Pinkney told Publishers Weekly that, while he had illustrated more than 100 books, spending such concentrated time studying Martin Luther King Jr. life and works, along with Wittenstein’s manuscript, changed how he perceived the United States.

“The more I immersed myself in his mission, the more I thought about the heaviness of the responsibilities he carried on his shoulders. Through the process of creating the images for this book, I sought to visually interpret Dr. King’s vulnerability and courage, his profound concern alongside his vision of unflappable hope. It changed my own lens in viewing this country’s repressive past and its moral compass for seeking equality and justice,” he said.

Jerry and his wife Gloria raised four kids together, two of whom became children’s book illustrators themselves. In 2016, Pinkney received the Laura Ingalls Wilder Award (now the Children’s Literature Legacy Award), to honor his substantial and lasting contribution to children’s literature.

In his acceptance speech, he talked about his young life as an artist. He said, “In creating picture books, a new world opened up. The book itself became my muse — a vessel that could hold all of the joy and sadness of my growing-up years, all the triumphs and tragedies. By using my personal history, the work became more layered, the drawings more meaningful. Art became the bridge that carried me from the past I wanted to escape into the world I wanted to inhabit. My childhood was limited, but I learned that through my own creativity, the world was limitless.”