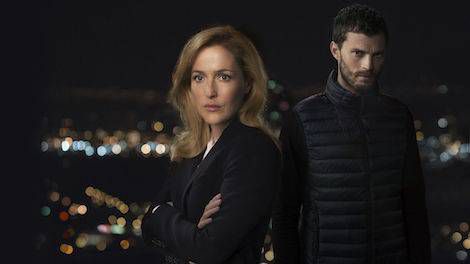 I’m often a day late and a dollar short. My mother always said I was a late bloomer. Whatever it might be this time, I only recently discovered and finished the Netflix awesomeness that is The Fall. I mean, I was aware of it, because I cheerfully admit that I have a giant girlcrush on Gillian Anderson and knew she was in it and that alone made it something I wanted to watch. Aside from the awesome Ms. Anderson herself, the show has some of the best feminist monologues and other one-liners I’ve heard in TV recently. I have actually cribbed some lines from Anderson’s character, Stella Gibson, in conversation since then, although I wish society made it so that I didn’t have to.

Some of those feminist comments, uttered from the highly intelligent and sensual lips of Stella Gibson, deal with compliance vs consent (hint: one does not imply the other, you guys); violence against women; slut shaming; female sexuality; female empowerment; and just some sweeping commentary about gender roles. Holy shit, you guys. I love her so much! She even paraphrased Margaret Atwood’s statement famous quote about asking her male friend why men are afraid of women. (For those of you who aren’t familiar with it, Atwood asked a guy friend that question and he said it’s because men are afraid women might laugh at them. Atwood later asked a room full of women why they are afraid of men and they replied they are afraid men might kill them. See a slight difference in the responses there?)

So if you, like Stella Gibson, understand that women can enjoy a one-night stand as much as a man can, that compliance does not imply consent, that victim-blaming and slut-shaming are not acceptable and we believe you if you say you were raped, and that women can be sexy solely to please themselves and no one else, then this post is for you. Here are a couple books that my new fictional hero Stella Gibson, and possibly Gillian Anderson, too, would hopefully approve of.

We: A Manifesto for Women Everywhere. This is the new book that Gillian Anderson herself co-wrote with journalist Jennifer Nadel. It’s a mix of psychology, politics, and spirituality designed to empower women through the use of nine principles. It’s a modern woman’s self-help book without being the kind of self-help book that usually makes me twitch. It is beautifully written and gentle and I am in love with it.

Come As You Are. This book by sex educator Dr. Emily Nagoski engages in the how and why of female sexuality and sexual pleasure using science. But in a fun and interesting way with a great writing style. Women don’t have the equivalent of a purple pill because female sexuality is complex, right? Dr. Nagoski explains why, and holy cats, I learned a whole lot! I also think this is a book Stella would possibly not need for herself, but would approve of for ladies who want to know.

Asking For It. This novel by Louise O’Neill puts victim-blaming front and center and would certainly send Stella Gibson off on an epic rant about the injustices against women and the prevalence of rape culture. This book is about a teen who is drugged, raped, and publicly shamed, which causes the members of her town to take sides for or against her. Friends abandon her, people whisper as she walks by, and the media had mostly decided she was asking for it because she was dressed provocatively.

We Believe You. This book by Annie E. Clark and Andrea L. Pino take the stories shared by women from college campuses all across America about assault. It is a dark topic but with a surprisingly hopeful theme throughout, as it also focuses a great deal on activism, awareness, and healing. This book is something I can easily envision on the shelves of Stella Gibson’s office, and Gillian Anderson herself is also a huge activist against violence against women and children.

There are so many, many books I could recommend for this topic. I’m sure I missed plenty. Which books would you recommend?