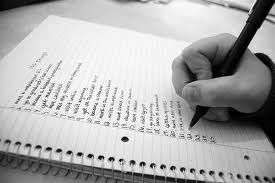 Let me introduce you to one of my biggest reader quirks: my lists. I have a multi-spreadsheet document consisting of the original list of the 1001 Books To Read Before You Die, along with the additions made to the lists in the newer editions. The spreadsheet allows me to mark books I’ve read and books I own that are not yet read. It calculates the percentage of all the lists I’ve completed individually, as well as the percentage of all the lists combined. It tells me how many years, based on my age and last year’s reading habits, it will take me to complete the list.*

I also have a document listing the Modern Library’s 100 Best Novels (both the board’s list and the reader’s list), the Telegraph’s 110 Best Books, and St. John’s College’s heady and least-likely-to-ever-be-completed Reading List. The there’s the mental list I keep of books mentioned by other bloggers and on Twitter that sound interesting (I’m very susceptible to other people’s book evangelizing). If no other book is ever published in the history of forever, I will not complete all these lists until I am in my 50’s.

Surely such neurotic list-keeping must have some deep purpose, like the desire to immerse oneself in centuries of literary greatness, or to track the course of great literary minds over history, but no. I keep lists because crossing a title off it gives me a weird sense of satisfaction, like I’ve conquered something. TAKE THAT, LIST CREATORS WHO DO NOT KNOW I EXIST! I OWN YOU. Knowing for a fact that a handful of Literary Illuminati create each of these lists, and that they’re based on little real objective criteria, and that they’re probably biased toward the editor’s friends in publishing- these things affect me not. I must defeat the lists.

That’s not to say I haven’t created shortcuts. For example, there’s no way on God’s green and glorious globe that I’m EVER going to read the eleven books by J.M. Coetzee on the 1001 Books list. To make up for this, I’ve created a new category on my spreadsheet called “Never Gonna Happen.” I cross out the undesirables and replace them with something I think is more worthy- but I’m only allowed to do this if I’ve read something of that author’s. I hold the lists in such esteem that I utilize complicated spreadsheets to monitor my progress, but not enough esteem to take them as a gospel that will dictate the next 30 years of my reading life.

And that’s really the point, isn’t it? We can know that these reading lists are created by someone who doesn’t share our reading tastes, and we sort of bristle about being told what we “should” read, but there’s a niggling pleasure to being the only person in your circle of friends to have read Thucydides. There’s a comfort in knowing that as the literary canon marches on, adding dozens of worthy titles every year, there are Lists of Generally Accepted As Important and Probably Awesome Books you can fall back on when you’re feeling overwhelmed by the greatness of it all. Because sometimes, you just want to read Nabokov and feel smarter (and a little smug because you get to cross something off) for it.

*Here‘s where I got the spreadsheet, if you’re interested.