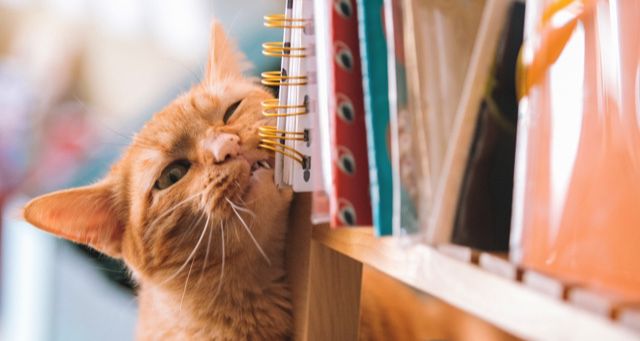 I’m pretty sure my cats want to learn to read. As you can see from my photographic evidence, Jack, the eldest, is a poetry lover, while young Ollie has a real interest in true crime. So, I sat down and had a think about ways that I might teach them, and how reading with cats might work. 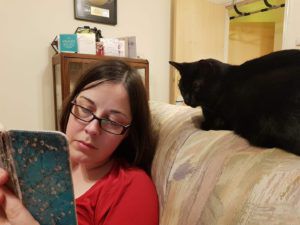 Ollie joining me as I read Mindhunter on my Kindle app

Maybe I could get them started on the Mog books, in honour of the late great Judith Kerr. Goodbye, Mog is a sad, sweet and ultimately uplifting story about loss, grief, and how to deal with it. 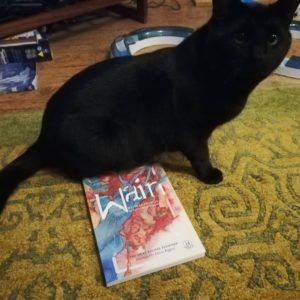 Jack would like you to read him some poetry, please

Once they’ve got their grounding with picture books, they might want to move on to Tamora Pierce’s Song of the Lioness series. Alanna, the first Lady Knight of the realm of Tortall, disguises herself as a boy to train amongst the other prospective knights. She also has a destiny bestowed upon her by the realm’s gods, and she’s assisted by Faithful, a constellation who comes to earth in the form of a cat. First appearing in In the Hand of the Goddess, Faithful lives up to her name, supporting Alanna during her adventures. Something of an aspirational figure for feline readers…

Another supernatural creature who takes feline form is Mogget, who acts as companion and incredibly snarky critic to the eponymous heroine in Garth Nix’s Sabriel. I think that Ollie, the grumpier of my two cats, would quite appreciate Mogget, who is in fact the magically-bound form of a trapped, very angry spirit made entirely of wild magic.

My boys are lazy even for cats, so they’d probably see themselves in Lewis and Carol, the two pampered house cats in LL McKinney’s A Blade So Black. Belonging to the heroine Alice, these two stay firmly out of her supernatural adventures – which is a shame, as this modern spin on Wonderland has some of the most thrilling monster battles I’ve read in a long time.

The cats in Varjak Paw would probably do well in McKinney’s Wonderland. SF Said’s middle-grade book features cats who learn a secret form of martial arts, passed down through the generations known as The Way. The Way includes powers such as Slow Time (which allows the cat to move super-fast by slowing down the world around it), Moving Circles (a fighting style using kinetic energy), and Shadow Walking (clearing their minds to allow them to pass undetected).

I’m not totally sure whether I’d let my cats read about the Discworld’s famous witching cats, You and Greebo, both of whom appear in Wintersmith. On the one hand, it’s an excellent story, and I love the David-and-Goliath dynamic between the two cats. On the other hand, it’s pretty apparent that both You and Greebo are Real Cats, and I don’t want Jack or Ollie to get any ideas. They’ve already got me firmly under the paw – if they start messing about with quantum, life is going to get a lot more complicated.

Both my cats are homebodies, and going outside is a little overwhelming for them – car journeys particularly stress them out. The Travelling Cat Chronicles by Hiro Arikawa might be a great way to get them used to the idea of venturing further than the back garden, and realising that there’s plenty to see in the wider world.

Sadly, I don’t think my dream of teaching my cats to read is going to come true any time soon (dog owners, on the other hand, can get right to it). In the meantime, they’ll just have to stick to their current hobbies – sleeping, eating, and ornithology.

For the many, many cat-loving readers on here, pick up your next cat-themed read after browsing 10 Books for Cat Lovers. To meet a cat who already knows how to read (my boys are impressed), check out My Cat Reviews Books.