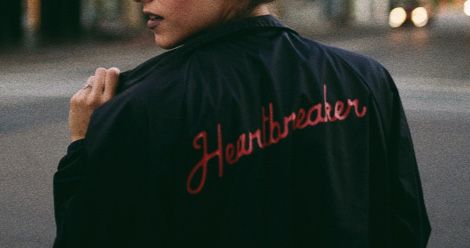 I have noticed a trend in my assigned reading. The theme of my English 101 class is love—I chose this theme because at the very least, 18-year-olds care about sex and death. (And pizza, usually, but I can’t do anything with that.) So, although my class’s theme is love, and typically romantic love, nearly all the required reading in poetry focuses on heartbreak poems. (If you want to read love poems that aren’t just heartbreak poems, click here.)

The students usually notice this about three weeks into the semester. In the spring, the running punchline was, “Mary Kay, who hurt you?” and the answer is, of course, like, EVERYONE, y’all, give it time. They joke, but inevitably, each student finds that at least one of these heartbreak poems resonates with them. I hope that among this selection, you find something. 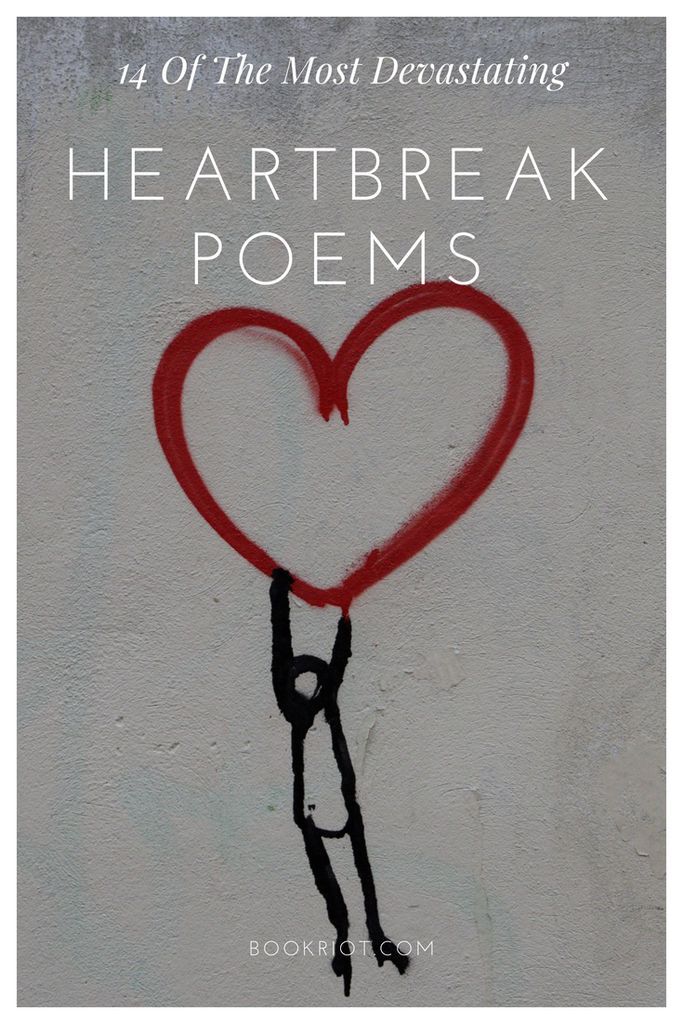 1. “Litany in Which Certain Things Are Crossed Out” BY RICHARD SIKEN

This is one of the most resonant heartbreak poems that I have ever read. It plays on the forms of the litany poem and the damsel-in-distress narrative. It’s conversational, and it moves through settings and characters in meta-narrative.

This poem is one of the most famous heartbreak poems—I’ve heard it described as the “opposite of a carpe diem poem” in that it’s not so much about love and loss, but love that was never ventured.

3. Letters from the Other Woman by Monica Prince

This entire collection deals with heartbreaks and its many forms, and it should definitely be read in its entirety. These poems about heartbreak and betrayal display as found poems, epigraphs set their stage: “Found on a hotel notepad / stuffed in a suitcase,” “Found on the kitchen counter / beside a half-empty mug of coffee.” And their opening lines are equally as rending. Like, “We promised to stop calling this late at night.” “Let her discover me / with an inopportune phone call.” My personal favorite begins with seeing through a misdirection: “Even though you aren’t wearing it, / I can tell you’re married.” Prince’s collection is a much-needed book for anyone wanting to read about heartbreak.

4-5. Love is a dog from hell And I made a mistake by Charles Bukowski

People who know Bukowski’s work do not generally think of him as a poet who writes poems about love, but his book’s title Love is a Dog from Hell suggests otherwise. One of my favorite poems by him, “Bluebird,” talks about the inability to express emotion. 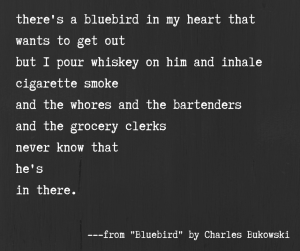 Another poem by Charles Bukowski is one of his poems about heartbreak and moving on:

I made a mistake

I reached up into the top of the closet
and took out a pair of blue panties
and showed them to her and
asked “are these yours?”

and she looked and said,
“no, those belong to a dog.”

6. You Fit Into Me by Margaret Atwood

You likely know Margaret Atwood’s work most recently by the adaptation of her novel The Handmaid’s Tale into television, but this short poem has always stuck with me as one of the strongest, most visceral interpretations of toxic love though it is not one of the most famous heartbreak poems.

Sharon Olds’ collection of poems, Stag’s Leap contains many poems about heartbreak and betrayal. One that I teach regularly is called “Sex without Love,” and you can read that here.

E.E. Cummings is more famous for his sexytime poems than the ones about heartbreak, but one that I feel gets overlooked often is “You Are Tired (I think),” one of his poems about heartbreak and moving on. Here are my favorite lines from that poem: 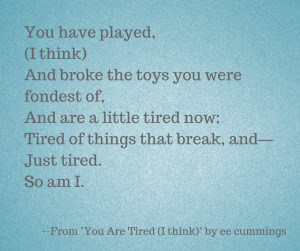 9. “For Women Who Are ‘Difficult’ to Love” by Warsan Shire

This is one of the most famous heartbreak poems about moving on, and if it sounds familiar, you probably recognize it from selections that were in Beyonce’s Lemonade album. Warsan Shire wrote all that poetry. It’s amazing. And if you’re a woman, and you’ve ever been (read: always been) told that you are difficult to love, then this is the poem you are looking for.

I expect to get some resistance at labeling this one among heartbreak poems, but heartbreak does not always happen at the end of a relationship: this heartbreak happens as a realization. Our narrator realizes his or her desperation in the type of love they feel for their significant other and how powerless it renders them. Here are a few lines from “Resignation.” 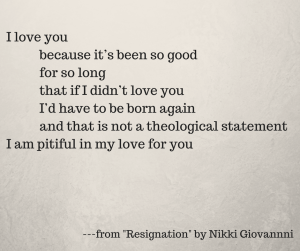 This poem might not qualify on many lists of famous heartbreak poems, but I can’t help but think YES IT DOES. “Porphyria’s Lover” is a narrative about an irresistibly sexy girl, and a narrator who, because it is a sin to lust and because she is tempting him, strangles her with her own hair. And then he regrets the murder. You can read the whole sordid tale here.

12. “Prayer of the Backhanded” by Jericho Brown

Jericho Brown’s work are not all heartbreak poems, but all three of his collections have heartbreak in them—and although, yes, sometimes the heartbreak is romantic, “Prayer of the Backhanded” from his collection Please talks about the relationship between father and son.

This is one of the few heartbreak poems in this list that deals with death, in particular, the mourning of a sister. Carmen Giménez Smith uses the analogy of blood to cement their relationship and the emotion of that loss that will have you in your feelings for days.

This heartbreak poem is a break-up with Love itself, personified. It’s the perfect summation of the glutton-for-punishment attitude that anyone has when she or he goes through multiple, consecutive heartbreaks.

Those are my best picks for heartbreak poems. Which ones did I miss? Let me know in the comments!