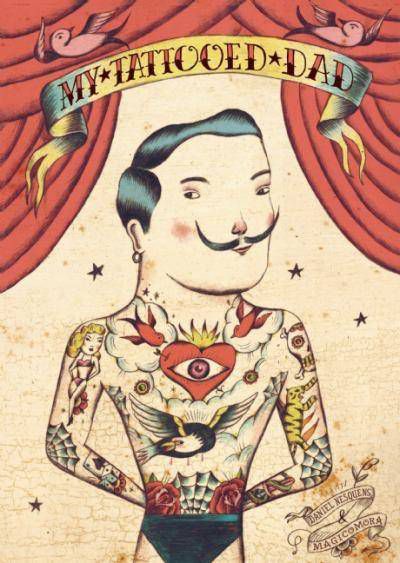 I got my first tattoo two weeks before I graduated college. My parents, being pretty normal about this stuff, had always said: “Tattoos? Sure, when you’re supporting yourself.” Up to that point, I tortured them with crazy hair experiments (see also, dreadlocks). I may have jumped the gun by a few, ahem, months, but it was close enough — and hideable enough — for all of us to feel like I kept to the spirit of the agreement, if not the letter. Of course, since then tattoos have become both more widely spread and more socially acceptable. Whereas years ago you wouldn’t have made it to certain job interviews, these days it’s not uncommon to see suits with visible ink. My favorite thing about this saturation, though, is seeing young parents of tiny children with tattoos. My 2-year-old nephew’s swim class is a great example — I don’t think that there was a single parent there who didn’t at least have one piece of body art. And my nephew’s father has many; as far as we can tell (it’s hard to know with kids that age), my nephew doesn’t even know that they’re something out of the ordinary. In honor of all my fellow tattoo aficionados, here are three kids’ books that rock some ink. The narrator’s dad has “ants in his pants,” according to Mom, and isn’t home much, but when he is around he’s full of stories, and most of them are about his tattoos. Like this one here, of a two-tailed tiger? See, this one time they were stranded on an island, and … Okay, so this one is a bit older than most picture books, but bear with me. My Tattooed Dad reminds me a bit of Shaun Tan’s work — books that are for children in that they are beautiful, illustrated, and short, but for adults in that they work on several levels (and for all those other reasons too). It’s too long for most toddlers, but the illustrations alone are captivating, and are you ever too young to learn that tattoos can tell stories? You are not. In Mibs Beaumont’s family, you get your savvy when you turn thirteen. Her brother can make a storm out of a few clouds; her aunt Olive can melt ice with one hot stare. And she can’t wait! Especially not when her father gets into a terrible car crash two days before her thirteenth birthday. Mibs wants nothing more than for her talent to be healing powers that can help wake him up from his coma. Imagine her disappointment when she discovers that her savvy, instead, is that people’s tattoos (even the temporary ones) can talk to her. But this odd, occasionally scary talent will turn out to be far more useful than Mibs ever could have guessed. Leslie’s life is, to put it in a word, terrible. Her father is an alcoholic, her brother is a drug dealer, his friends consider her their plaything, and it’s really only her paycheck from waitressing that keeps the lights on. Not much of a life for a 17-year-old. So when she gets a tattoo, it’s because she wants to do something for herself — something that will make her feel strong, powerful, in control. It’s just her luck that the tattoo she picks is actually a design that will make her the tool of the Dark Court of Faerie. Girl cannot. Catch. A break. Ink Exchange is the darkest by a longshot of the Wicked Lovely series, but it’s also my favorite. Leslie’s transformation from a victim of circumstance to a truly empowered heroine is painfully enthralling, and those of us who have used body art as a stepping stone in our lives will recognize a sister in arms.