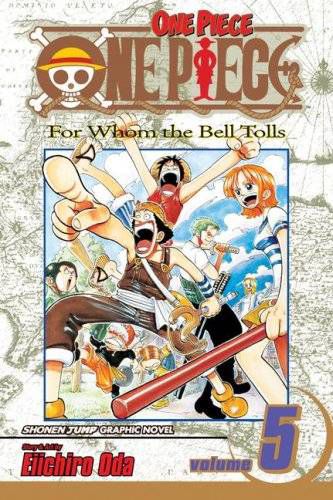 “For whom the bell tolls” is one of the most well known phrases in the English language. The phrase comes from Elizabethan poet John Donne’s Meditation XVII, published in the volume Devotions upon Emergent Occasions from 1624. It was made famous by Ernest Hemingway when he turned to Donne’s meditation to name his fifth novel, For Whom the Bell Tolls, which takes place during the Spanish Civil War (1936–1939). Since then, creators in search for a strong and compelling title have also picked up the phrase. Here are four of them. 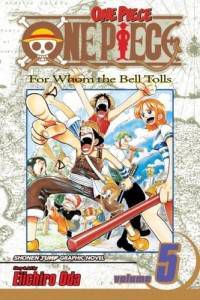 1) For Whom the Bell Tolls, issue #5 of manga comic One Piece by Eiichiro Oda.
One Piece was first published in Japan in 1998 and in English translation in North America in 2002. The main character of One Piece is Monkey D. Luffy, who after eating a strange fruit can turn his body into rubber. Together with a band of pirate friends, Monkey travels across the oceans searching for the One Piece, which is the treasure of the last King of the Pirates.

2) “For Whom the Bell Tolls,” episode of the TV show The Vampire Diaries.


The TV show The Vampire Diaries airs on The CW and is currently in its seventh season. The TV show is based on L.J. Smith’s novel series and stars Nina Dobrev as main character Elena Gilbert. Elena is drawn to the two Salvatore brothers, Stefan (played by Paul Wesley) and Damon (played by Ian Somerhalder), who both happen to be vampires. “For Whom the Bell Tolls” is the fourth episode of the fifth season, written by Brett Matthews and Elisabeth R. Finch and directed by Michael Allowitz. The plot centers on Stefan suffering from memory loss so severe that he doesn’t even remember that he is a vampire.

[youtube]https://www.youtube.com/watch?v=puwr9J0-tKo[/youtube]
In Reading Color Newsletter
A weekly newsletter focusing on literature by and about people of color!
Thank you for signing up! Keep an eye on your inbox.
By signing up you agree to our terms of use

Do you know of any other works that are titled For Whom the Bell Tolls and are not written by Ernest Hemingway?