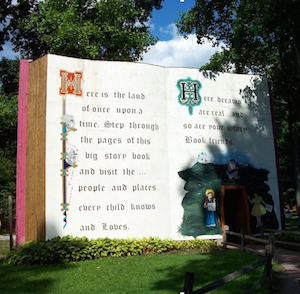 Storybook Forest is a featured attraction at Idlewild Park in the Laurel Highlands near Ligonier, Pennsylvania. It features thirty-three scenes and landmarks from an array of children’s fairytales and fables, including The Little Engine That Could, Jack and Jill, Humpty Dumpty, Aladdin, The Three Little Pigs, and Alice in Wonderland. There are also six costumed actors in character as Mother Goose, Captain Candy, Goldilocks, The Old Woman Who Lived in the Shoe, Little Red Riding Hood, and Snow White.

Storybook Forest is located in the southwest corner of the park and there are a number of other attractions including a water park, various amusement park rides, shows, and activities. Admission tickets cost $39 per person at the gate, but can be purchased online in advance for a discount of up to $11. If you live nearby, various season passes with different privileges can be purchased and range from $57 to $82 per person.

Despite the steep admission cost, Storybook Forest is a great place for kids to have a chance to be apart of their favorite stories.