This Riot Recommendation of favorite fiction about activism is sponsored by Parts per Million by Julia Stoops. 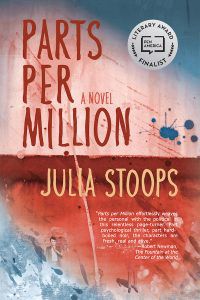 A tale of activism, loss, and transformation, Parts per Million is reading for the resistance. Three Portland activists work hard to save the world—one radio show at a time—when an Irish photographer with an expired visa disrupts their lives. Against the 2002 backdrop of the buildup to the Iraq war, the activists uncover war technologies research at an Oregon university, setting off a page-turning sequence of events. Julia Stoops began Parts per Million, a finalist for the PEN/Bellwether Prize for Socially Engaged Fiction, during the tumultuous period after 9/11, and it’s now “a primer for the fight to come.”

Social engagement can make for some engaging reading, especially during this moment in time when consciousness raising is a civic duty for all ages. So we asked you to tell us what you think are the best fiction reads featuring activism. Here are some of your recommendations:

The Long Night of White Chickens by Francisco Goldman

My Son’s Story by Nadine Gordimer

The Ink Truck by William Kennedy

The Normal Heart by Larry Kramer

State of Wonder by Ann Patchett

Tell No Lies by Barbara Rhine

Everything Belongs to Us by Yoojin Grace Wuertz

The Book of Daniel by E. L. Doctorow

The Fifth Sacred Thing by Starhawk

Eat the Document by Dana Spiotta

The Enchanted by Rene Denfeld