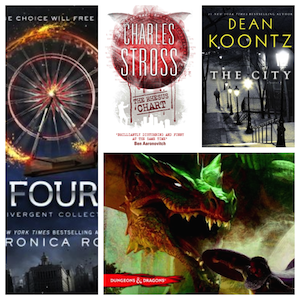 We are going all-supernatural in this month’s Books to Watch, with dragons and vampires and ladies that are cities and cities that are dragons. Enjoy. Lucius Shepard is a wonderful writer, and I long lamented the fact that he didn’t write novels. I discovered him through his short works and it seems that my wish for a novel has been answered, in the form of Beautiful Blood, which tells the story of Richard Rosacher, an ambitious young medical student who becomes fascinated by the properties inherent in the blood of a dormant dragon, whose body is the dominant feature of a town in the mountains.  The story begins in the 1850s in the town of Teocinte, in a world ”separated from our own by the thinnest margin of possibility.” Shepard’s prose is amazing, and as this is a limited printing of 1000 you want to order this as soon as you can. I have very fond memories of playing Dungeons and Dragons and would like to credit it with both expanding my vocabulary greatly and inspiring much of my reading as a kid. This new Starter Kit includes everything needed to get started on your path to becoming a Dungeon Master; dice, character sheets and the rules (we must obey the rules).  This is the perfect gift for kids from about the age of ten (I know it says 12+ on the cover). Adventure, excitement and what will probably end up as a love of reading and an improvement vocabulary, what more could you want? These are four stories from Veronica Roth’s oh-so-very-popular Divergent world, each told in from the point of view of Tobias Eaton. The first three happen before the events in the Divergent books and the fourth happens in parallel to Divergent‘s storyline. Fans of the series will not want to miss this. The City tells the story of Jonah Kirk, who meets a woman early on in his life who claims to be the manifested soul of the city and she guides him through some of the more important moments in his life. More a character study than a thriller, The City seems to be a change of tone for Koontz, though there are still supernatural elements to the book. The fifth in Stross’ series of Laundry Files books, The Rhesus Chart tells the story of Bob Howard, who works in a top-secret government agency that deals with the occult. Howard is sent to investigate bankers-turned-vampires, a scenario that isn’t really, perhaps, all that unbelievable. Stross, a Hugo award winner, mixes humor and the supernatural in the series, and is getting a lot of great reviews.