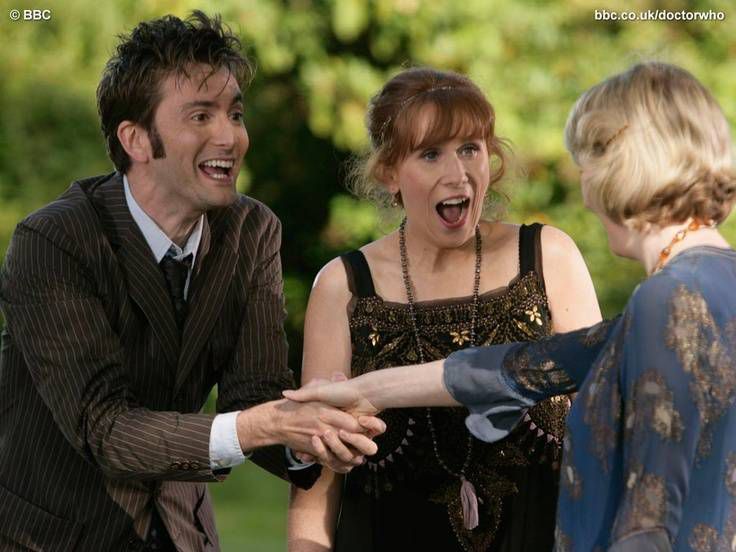 In season three, episode twenty-one (“The Dead Pool”) Castle is mentoring rookie author Alex Conrad, but gets jealous when Alex forms a bond with Beckett. In retaliation, Castle decides to give Alex a hard time by inviting him to a poker game with mystery genre giants Dennis Lehane and Michael Connelly.

The seventh episode of series four (“The Unicorn and the Wasp”) centers on the eleven-day disappearance of Agatha Christie in 1926 and a fictional murder that may or may not have been committed by an alien.

In the third episode of series one (“The Unquiet Dead”), Charles Dickens aids the Doctor and Rose in saving the world from the Gelth, a now gaseous species who lost their bodies in the Time War and are trying to survive by inhabiting human corpses.

In series three, episode two (“The Shakespeare Code”) the Doctor and Martha visit sixteenth century England where they encounter a coven of Carrionite witches bent on destroying the world. Only an impromptu performance by the greatest English playwright in history can save the human race.

Book Deals Newsletter
Sign up for our Book Deals newsletter and get up to 80% off books you actually want to read.
Thank you for signing up! Keep an eye on your inbox.
By signing up you agree to our terms of use
[youtube]https://www.youtube.com/watch?v=5tES8Zi_E9k#t=87[/youtube]

In this two-part special that ended season five and kicked off season six (“Time’s Arrow”), the crew of the Enterprise travels back in time and runs into Mark Twain and Jack London, who is working as a bell hop before his big break as a writer. BONUS: Twain gives London writing advice.

Helena G. Wells (a female reimagining of the classic author) is a recurring character on the hit Syfy show.