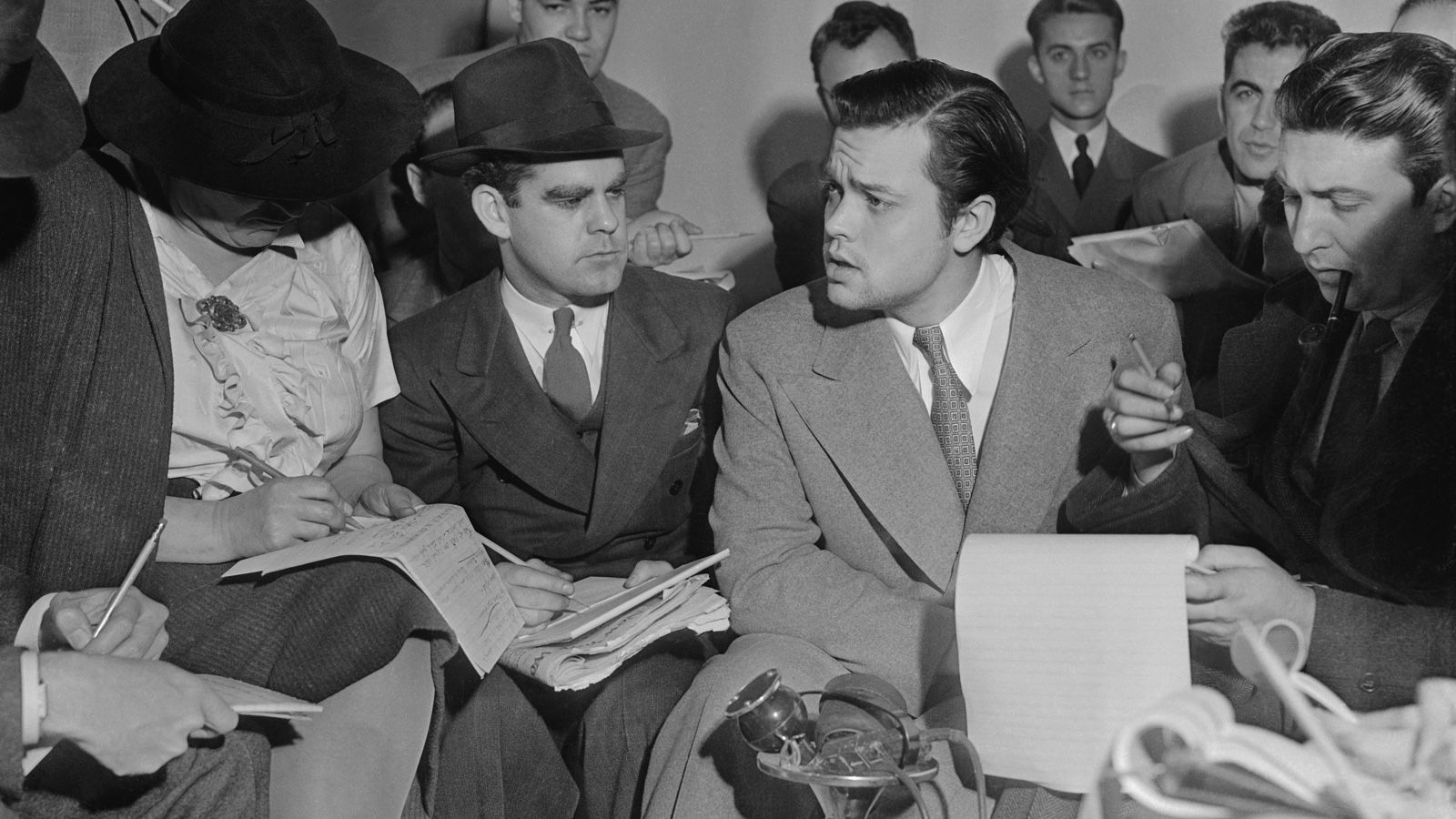 In 1938, during the Great Depression, my grandmother was a teenager and one of ten kids of a Portuguese immigrant farmer in Massachusetts. She enjoyed radio shows like The Shadow. Her family couldn’t afford a radio but listened at a wealthy neighbor’s house. On October 30, 1938, she heard the middle of an apparent news broadcast about Martians invading New Jersey and coming up the East Coast — towards her state!

The “news report” was actually The Mercury Theatre on the Air’s infamous broadcast of H.G. Wells’s 40-year-old sci-fi novel The War of the Worlds, narrated by Orson Welles. My grandmother and her neighbors realized it was fiction before they started evacuating. Still, it’s easy to imagine how they heard the broadcast out of context and consequently panicked.

They weren’t the only people who thought the broadcast might have been real. There were dozens of confused, angry calls to police and radio stations, which some journalists later assumed was a nationwide panic. Of course, my grandmother’s story is not evidence of a nationwide evacuation attempt, but it made me fascinated with The War of the Worlds and its radio broadcast. The novel still influences the sci-fi genre today, drawing on timeless fears of invasion. The broadcast illustrates how fast misconceptions can spread and why media literacy and clear content warnings are important.

The History and Background of Wells’s Novel

The War of the Worlds is a sci-fi novel by H.G. Wells, originally serialized in UK and U.S. magazines in 1897 and published as a book in 1898. Wells had already published The Time Machine, The Island of Doctor Moreau, and The Invisible Man. The War of the Worlds wasn’t the first novel about Martians or extraterrestrial invasions, but it was one of the first and uniquely influential. It’s never been out of print.

In the book, technologically advanced Martians invade Earth, landing in southern England. They easily overpower the British military. Ultimately, though, the aliens are defeated because they can’t breathe our air and lack immunity to our viruses and bacteria.

I was surprised to learn that many literary critics have compared The War of the Worlds to European invasion literature. In the novel’s preface, Wells invokes this theory, comparing his own fictional alien invasion to the 1820s and ‘30s British genocide of Aboriginal people in Tasmania.

Matthew Wills wrote: “H.G. Wells’s famous science fiction novel imagines what would happen if Martians did to Great Britain what Europeans did to Tasmania.” Wills quotes Aaron Worth calling it an “imperial satire.” Wells’s preface critiques colonialism, but is racist and problematic in itself. It exaggerates differences among humans and equates technology with a “superior” society. This interpretation also expresses guilt over colonization and draws on the fear that Britain would be invaded.

According to A. Brad Schwartz, author of Broadcast Hysteria: Orson Welles’s War of the Worlds and the Art of Fake News, Welles had the idea of a fictional radio broadcast formatted like a news bulletin even before his team chose that book. Welles, who was 23 at the time, woke up to dozens of angry, front-page newspaper headlines after his broadcast.

The radio show supposedly caused widespread panic, in part because radio was a new technology. Schwartz notes that Welles’s broadcast used realistic sound effects and an unusually late break 2/3 of the way through. That’s 40 minutes of uninterrupted fake news, without context. No wonder people like my grandmother were terrified or confused, tuning in somewhere in the middle.

As a teen in the 2000s, I laughed at satirical “fake news,” including impressions of politicians. In contrast, as Schwartz notes, 1930s Federal Communications Commission regulations forbade radio announcers from impersonating FDR, the current president. One Mercury Theatre voice actor did an FDR impression for his politician character, with some deniability. This must have sounded almost like a 1930s deep-fake.

Although the 1938 radio panic was not merely an urban legend, it became exaggerated over time. Schwartz says that only about 50 people were documented trying to evacuate because of the radio play. Social scientist Hadley Cantril popularized and overstated the story into a nationwide panic, using vague language to say it impacted around a million people.

Other researchers frame the exaggerated radio panic as newspaper journalists trying to discredit radio, a new medium, as untrustworthy. As a result of Welles’s broadcast, the FCC informally banned fake news clips, but it directly led to no new laws or regulations.

To some people, the broadcast was disorienting, blurring common sci-fi cliches with news. By 1938, most U.S. adults did not believe in Martians. However, some did, and the U.S. Navy entertained the possibility as late as 1924. Nineteenth century Italian astronomer Giovanni Schiaparelli had observed “channels” or canali on Mars. In English, canali was mistranslated as canals, falsely implying artificial construction.

Legacy in Literature and Film

H.G. Wells’s The War of the Worlds had an immediate impact on pop culture. History professor Sarah Bond’s article mentions an unofficial sequel from 1898, less than a year after The War of the Worlds. In this novel, Edison’s Conquest of Mars by Garrett P. Serviss, Martians built the Great Pyramid — an early, obviously fictional version of the “ancient aliens” theory. Bond points out the white supremacist implications of “ancient aliens” theories and expresses concern that a sci-fi trope has turned into a conspiracy theory.

The War of the Worlds has had seven movie adaptations, beginning in 1953; several TV series; video and computer games; audio dramas; and comic books. Some of these change the setting. The 2005 movie starring Tom Cruise and the 2019 Fox miniseries both updated the original story into a modern setting. Even Orson Welles’s broadcast moved the story’s action from southern England to New Jersey and then New York City.

Even movies that aren’t versions of Wells’s novel seem influenced by his plot twist, in which Martians have no immunity to Earth’s microbes. In Mars Attacks! a 1996 parody, a country song destroys the aliens. In Independence Day (also from 1996), their downfall is a computer virus. In Signs (2002), they’re defeated by water. In A Quiet Place (2018), the frequency from Deaf character Regan’s cochlear implant distresses the aliens. Although none of these are direct adaptations of Wells’s novel, all fall under the trope Wells popularized: invading aliens defeated by mundane Earth objects or organisms.

The War of the Worlds helped to shape the entire sci-fi genre, which was called “scientific romance” in Wells’s time. Alien invasions and homages to Wells’s novel became common in sci-fi. In the 1930s and ’40s in the U.S. — sometimes called the Golden Age of Science Fiction — Isaac Asimov, Arthur C. Clarke, and Robert A. Heinlein, and many more authors published alien invader stories. The League of Extraordinary Gentlemen, Volume II, a 2002–03 limited comic book series by Alan Moore and Kevin O’Neill, is about an alien invasion.

The controversy about the Mercury Theatre’s broadcast of the novel also seems relevant today. Radio was a new medium in 1938, so actors like Orson Welles wanted to push its limits. Meanwhile, many people lacked the media literacy to distinguish a realistic-sounding, frightening, fictional broadcast from real news.

The Mercury Theatre’s broadcast of the novel raises questions on the importance of context, critical thinking, content warnings, and artistic license. In the horror movie genre, The Wicker Man (1973) and The Blair Witch Project (1999) both opened with fake “disclaimers,” suggesting that these fictional stories might actually be true. People still share and believe misinformation online every day, even if they might not believe a dramatic broadcast about extraterrestrials.

15 of the Best Alien Books

Books of Future Past: Visions of Tomorrow and Yesterday’s Sci-Fi