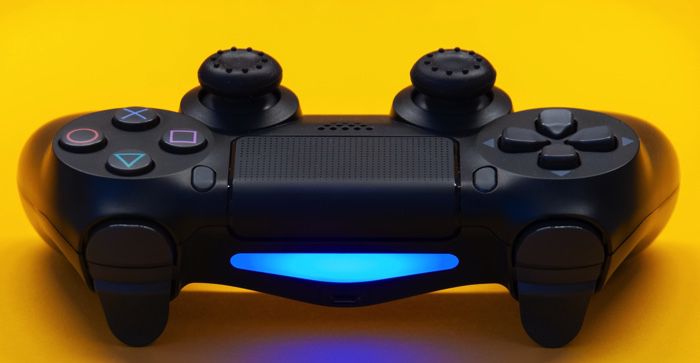 Out of the many different ways we can adapt our beloved books, video games are top of my list. They give a certain level of agency, placing me directly in the driver’s seat of my favourite characters. Some might feel like the car is on autopilot, but most allow me a say in the decision process. If anything, they help build on the story I love so much. What surprises me is how many video games are based on books! If you want to encourage your fellow gamer to pick up a book instead, take a look at this list.

Full disclaimer: There is microscopic diversity when it comes to video game creators and the authors who influence them. This is not new in the literary industry and it is definitely not new in the gaming industry. If you have any suggestions for the best video games based on books by women or authors of color, please shout them out on our social media!

This fairly new game is available on Switch/Steam/iOS/Google Play from indie developers La Belle Games and Arte France. It is a gorgeous retelling of Frankenstein by Mary Shelley, allowing the player to be the Creature and rediscover the world around you. It is a casual adventure game with puzzles and narrative direction to retell Shelley’s story from a more innocent view. It’s not just based on Frankenstein; it is everything we love about Frankenstein from the other side of the window.

If you like the idea of rewriting your favourite characters, check out Austen Translation from Worthing & Moncrieff. It’s a parody strategy game set in the world of Jane Austen, available on Steam. You have the role of an innocent young woman in need of a wealthy husband to escape a future of poverty and destitution. Presented as a visual novel, I love the cute ‘paper doll’ art. There are also plenty of plot twists to send Mrs Bennett for the salts! The replay value is high; a perfect palate-cleanser between Pride and Prejudice and Emma.

80 Days from inkle is a steampunk expansion of our world, as inspired by Jules Verne. It’s the perfect game for any travel geeks grounded due to COVID-19. (Yes, that would be me.) The same characters are there and the same wager is still causing problems. You play as Passepartout, the loyal valet of Phileas Fogg and manager of the finances, health, and travel plans. It’s a race against the clock with an interactive story based on your choices throughout. Different choices lead to different endings and naturally, you will want to reread Around the World in 80 Days to compare notes.

My fave adaptation of Alice’s Adventures in Wonderland by Lewis Carroll, and possibly the most unique ever. It’s a 3rd person action-adventure game, published by Electronic Arts (EA) and released all the way back in 2000. The game is a dark and violent twist on the classic story, founded in a fantastical world of chaos and psychological trauma. Alice was left in a catatonic state after a house fire kills her parents and leaves her with serious burns. In her mind, Alice escapes to Wonderland to find it broken and despondent (much like her). Though very much outside Carroll’s original children’s story, American McGee’s Alice is a brilliant example of how a great classic story can transcend across time and space. American McGee’s Alice is now available as part of EA Play on service on PS4/5 and XBox One/Series consoles as well as XBox Game Pass.

A Little Lily Princess is a narrative simulation game available on Steam, based on A Little Princess by Frances Hodgson Burnett. While the game loosely follows the story, the main focus is on the relationships you build between the characters. As per the source material, Sara has arrived at a boarding school in Victorian England and starts a new chapter in her life with all the wealth she could ever need. However, when tragedy strikes, Sara must rely on her relationships within the boarding school to survive a harsh new world. Being a ‘Lily’ adaptation, there is F/F romance, depressive thinking, and some questionable events from history. However, the game is more of a narrative exploration of opportunity, allowing players to discover more about the characters themselves. A Little Lily Princess truly honours the original story and presents a really sweet visual novel that allows the characters to grow.

For even older classics, Unruly Heroes brings to life the main characters from the Chinese classic novel Journey to the West, attributed to Wu Cheng’en. There are a few good video games based on three of the Four Classical Chinese Novels, but I will always have a soft spot for Sun Wukong, the Monkey King. This is a platform adventure game, available on Steam/Switch/Xbox One/PS4 and allows you to play all four of the main characters: Sanzang, Wukong, Kihong, and Sandmonk. The game is far more lighthearted than the source material and more suitable for family game time.

There are plenty of video games based on comic book superheroes. I have been a fan of the LEGO versions of DC and Marvel for many years. However, my favourite video games based on comic book superheroes is Spider-Man: Miles Morales (Marvel). It’s a 3rd person action-adventure game with all of the usual style and flair you expect from a superhero. While the character is based on the Miles Morales we already know and love, the storyline is unique. The vibe is very akin to Spider-Man: Into the Spider-Verse, leaving you with plenty of material to read before, during, and after you play. Being the Spider-Man franchise, Spider-Man: Miles Morales is only available on PS4/PS5.

Speaking of heroes, it should be no surprise there is a video game based on the hit manga series, My Hero Academia by Kōhei Horikoshi. What was a surprise to fans was how GOOD the game is. Designed as a 3D arena fighter, you can choose from a cast of the favourites to fight against a range of opponents. And yes, you can call up sidekicks for help too. I really enjoy the ability to play as either hero or villain, giving some great perspective from both sides. If you love your MHA kids, you will get a real kick out of this game. The original was released in October 2018 for PS4, Nintendo Switch, Xbox One and Windows. A sequel (My Hero Academia: One’s Justice 2) was also released in March 2021 for Xbox One, PS4, and Nintendo Switch. If you want a refresher on the MHA characters, check out our earlier Book Riot article here.

The world of HP Lovecraft seems perfectly created for some weird messed up video games. There have been a few attempts over the years, but none have looked quite as beautiful nor tormented as Call of Cthulhu. This adventure RPG is available on Steam/XBox/PS4 and is based on The Call of Cthulhu by HP Lovecraft. Set in 1924, you play as Private Investigator Pierce, who is looking into the tragic death of the Hawkins family. Filled with shadowy characters, cosmic horror, and enough puzzling storytelling to freak you out, it plays like a tabletop adventure and leaves you wanting more books to read.

The Witcher video game series is the perfect example of when you really aren’t ready for the end. There are three games in the series, with The Witcher 3: Wild Hunt considered one of the best video games ever made (despite its infamous horse glitch). The games are based on the novel series The Witcher by Andrzej Sapkowski. Officially, the games are not canon. It is probably best to call them honourable fan fiction. If you are looking to read the books after playing the game, check out our guide here.

It would be remiss of me not to include BioShock in this list. As mentioned by fellow Book Rioter Dan in a previous article, BioShock has a strong relationship with the book Atlas Shrugged by Ayn Rand. There are easter eggs throughout the game connecting it directly with Rand’s work (and to some extent, Rand herself). Bioshock is set in 1960, and you are Jack. Jack’s plane crashed in the ocean near a bathysphere terminus leading to the underwater city of Rapture. The city was built by Andrew Ryan (hello, Ayn Rand), has since gone defunct, and is now filled with possessed enemies – and a few sane survivors. This FPS (first-person shooter) was first released in 2007 and is so good, it has been remastered for every gaming platform. It has been especially praised for its morality-based storyline (also influenced by Rand’s work) and the absolutely stunning graphics, considered a “demonstration of video games as an art form.” That’s definitely a big deal.

Don’t be too excited for this: the game was only released in Japan for the Nintendo Wii back in 2009. However, it is the 20th Anniversary of Fullmetal Alchemist by Hiromu Arakawa. Plus, Arakawa has very recently hinted at a new project this year. The 2009 video game was an original story set before the 16th volume and considered canon within the FMA universe. You could take control of either Edward or Alphonse and interact with various people around Central City. The game is more narrative than action, built on mystery and character interaction. While fans are eager to see more stories from Arakawa, I would also be very happy with some fresh gameplay – perhaps on the Switch with its touchscreen capability creating some awesome moves with spell-casting.

There are more video games based on books, with the style of game playing varying greatly between straight-up narrative games to obtuse yet inspired. When video games are inspired by our favourite books, it shows our passion and desire to play an active role in their world. There are even more books out there waiting for their video game adaptation. Check out fellow Book Rioter Zoe’s suggestions here.