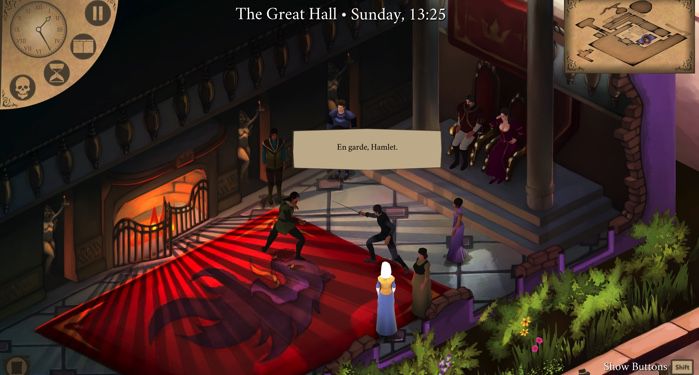 I recently played a video game in which I controlled a young woman as she navigated the halls of a darkened castle and gathered information in an attempt to stop a massacre. The woman’s lover had recently been banished, shortly following the death of his father, and she was worried about the possibility of him returning for revenge. Sure enough, after a few story beats, the lover returned and murdered the woman’s father. Finally, after poking around more, my character was killed and thrown in a river, to make it look like the death was a drowning.

If this story sounds familiar, perhaps you’ve heard of Hamlet. The game is called Elsinore, and it is an interactive take on the tragedy of the Danish prince. The main difference is that the story unfolds from Ophelia’s point of view, and the game allows the player to work to prevent the bloodbath at the play’s conclusion. It’s a fantastic game, worth the purchase if you’re looking for a well-crafted challenge. Playing it got me thinking about all the other literary video games out there.

For the purposes of this post, I’m defining “literary video games” as games that lean heavily on text, multifaceted plots, and/or character development to deliver their full experience. If you, like me, are a reader who also enjoys video games, there is a wealth of options for you.

Among my favorite games of the past few years is Celeste, a 2D platformer that is both excruciatingly difficult and deeply emotionally resonant. Following the journey of a woman named Madeline, the game uses the act of climbing an extremely treacherous mountain as a metaphor for managing one’s anxiety. It is as much of an inspiration for handling the disorder as any book about anxiety I’ve read.

There are some games that delve into genres, like the mystery-thriller Life is Strange or the hardboiled detective narrative of Yakuza. One can easily draw comparisons between the heroes of these games and those found in the works of Agatha Christie or Sir Arthur Conan Doyle.

There are some games, like Elsinore, that directly borrow their settings and characters from books. The Lord of the Rings, Harry Potter, and Sherlock Holmes have all found their ways into video games. Although many of these came to games via a film adaptation, there are some that made the leap more directly, like the Witcher games and the cult favorite Discworld Noir.

Notably, the first BioShock game draws heavily from Ayn Rand’s Atlas Shrugged (the protagonist’s name is Andrew Ryan, and his guide is named Atlas), to explore the concepts of morality and free will. BioShock has since become one of the earliest examples of video games being considered as art on a wide scale.

My favorite literary video games, however, are JRPGs. Long-running series like Dragon Quest and beloved classics like Chrono Trigger have produced stories, settings, and casts of characters as memorable as any found in the likes of Game of Thrones.

For a long time, the Final Fantasy series has been the standard bearer of story-driven Japanese roleplaying games. Perhaps the most literary in the series is Final Fantasy IX, which opens with a plot to kidnap a princess by a band of thieves disguised as a theater troupe. Tell me that isn’t a premise you’d find in a fantasy novel!

Throughout the rest of the game there are direct literary references. Playwright Henrik Ibsen (A Doll’s House and Hedda Gabler) receives a nod in the game’s “Ibsen’s Castle” location. The fictional author of the play the thieves are performing is named Lord Avon, a reference to Shakespeare’s birthplace, Stratford-upon-Avon, and the play itself shares some key plot points with Romeo & Juliet.

Beyond its allusions, the story of Final Fantasy IX takes place on several continents, as a team of renegades and weirdos team up to take on a world-threatening evil. Each main character, as well as most of the supporting cast, has a clearly defined character arc, and the game has a lot to say about the consequences of war.

Games like these go well beyond the stereotypes of mass violence and cheap stimulation with which some may regard video games. With these literary ideas at play in games already, as well as so many books that would be awesome as games, it’s great to report that the divide between two of my favorite media is smaller than you may have though.