I love how thought-provoking horror novels can be. Along with romance, horror is probably my favorite genre to read, and for similar reasons. That may seem counterintuitive, but I promise you it isn’t! Horror novels do not always end optimistically, the way romance novels guarantee. When they don’t, it’s a call to examine what justice looks like in the world of the novel. If, at the end, the monstrous force is winning, perhaps it’s not so monstrous after all. We should always be asking who the monster really is, what made it, and what it wants. That process of reckoning with monsters is a kind of optimism, because we believe it can be done.

Some readers are eager to “elevate” certain pieces of genre fiction from their genre into the realm of capital-L Literature. I don’t think that’s a worthwhile distinction to make. All fiction, genre or literary, makes a comment on the time of its writing and the society that produced it. The best thought-provoking horror novels are, like these, ones not trying to defy their genre. Completely entrenched in horror, the books celebrate and subvert tropes in turns. The authors are giving faithful horror readers the monsters, demons, and frights they desire, all while leaving eager readers with plenty of grist for the old brain mill.

So here are three horror novels, new for summer 2020, that dig into some of these bigger questions. And if you need more, there’s plenty more summer 2020 horror for you!

Mexican Gothic is, in many ways, a more honest version of classic gothic novels like Jane Eyre and Rebecca. The story begins when Noemí receives a letter from her newlywed cousin indicating she’s in mortal peril. This prompts Noemí to travel to the creepy manor her cousin lives in, where she too gets tangled in the mystery.

When a Gothic manor sits on a windswept moor, far from the place where the wealth was extracted to fund it, it’s tougher to see why it should be haunted. High Place, the house in Mexican Gothic, is in Mexico, a monument to a mining empire and geographically close to the mines themselves. The supernatural forces don’t have as far to travel. The connection becomes clearer. This book elegantly ties rotten families, marriage, childbearing, race, and capitalism together, without ever forgetting to be a wild, spooky, trope-y gothic ride.

This book has been getting a lot of buzz, and for good reason! To understand about what’s so good about it, I’m going to recommend a couple other books. Not thought-provoking horror novels, but great books nonetheless. Ghostland, an incredible nonfiction book examining haunted places in the United States, posits that hauntings happen where unresolved atrocities are festering. Think slavery, misogyny, the history of Indigenous people in the U.S., etc. The Fact of a Body, my other recommendation, is a memoir/true crime book that deeply instilled in me just how sinister toxic families can be.

The Year of the Witching follows Immanuelle, who is lured into the witchy woods on the outskirts of her rigidly religious village. There she receives her deceased mother’s journal, an object that will upend everything she knows about the world she lives in. As I started the book, I thought to myself, this really reminds me of The VVitch. When author retweeted a gif of Black Phillip, I knew I was on the intended wavelength. Indeed, both The VVitch and The Year of the Witching pitch a patriarchal, puritanical (and in TYOTW’s case, polygamous!) religion against more feminine witchcraft.

The Year of the Witching does a few things differently than The VVitch. There’s a richer world for these practices to clash in. The intersection of race with faith, gender, and class is brought into the discussion. Ultimately, the book’s resolution isn’t tidy, but it has a resounding message.

What was especially thought-provoking to me about this book was its use of blood. Blood and gore are de rigueur in a horror novel, sure, but the blood is not there solely to shock. Blood is shorthand or metaphor for about a million different and sometimes conflicting concepts: family, race, life, death, birth, womanhood, plague, sacrament, and more. How can one substance hold all these meanings at the same time? The Year of the Witching grapples with that question. 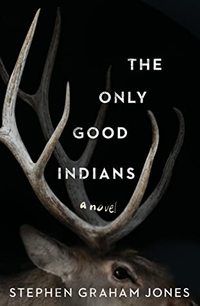 This title telegraphs in a sly way that, yes, people die in this book. It’s one of those books that’s good to go into knowing very little, but suffice it to say it’s about a supernatural entity seeking revenge against four Native American men for a misdeed they were all party to years ago.

Like the title allusion, twisting historical messages about Native Americans is precisely the aim of this book. Look at the news regarding professional sports teams in the United States and see that for all too long, representations of Native Americans in broader culture are often based on offensive stereotypes.

Horror novels aren’t exempt from this offensive stereotyping. Stephen King himself has been known to trot out the “Indian Burial Ground” trope for more than one book. The Only Good Indians steers into that skid and reclaims the trope. It takes the old saw from elementary school social studies that Native Americans “use every part of the animal,” and tacks on a sinister “or else.”

Of the three horror novels I’ve written about, this one has the haziest resolution for me as a reader, which is not a bad thing. Sometimes the questions of “who is the monster?” and “what does justice look like in this world?” are too complex to be package up in a single piece of genre fiction. I still find optimism in the exploration. After all, history stays haunted if it’s not honestly examined.