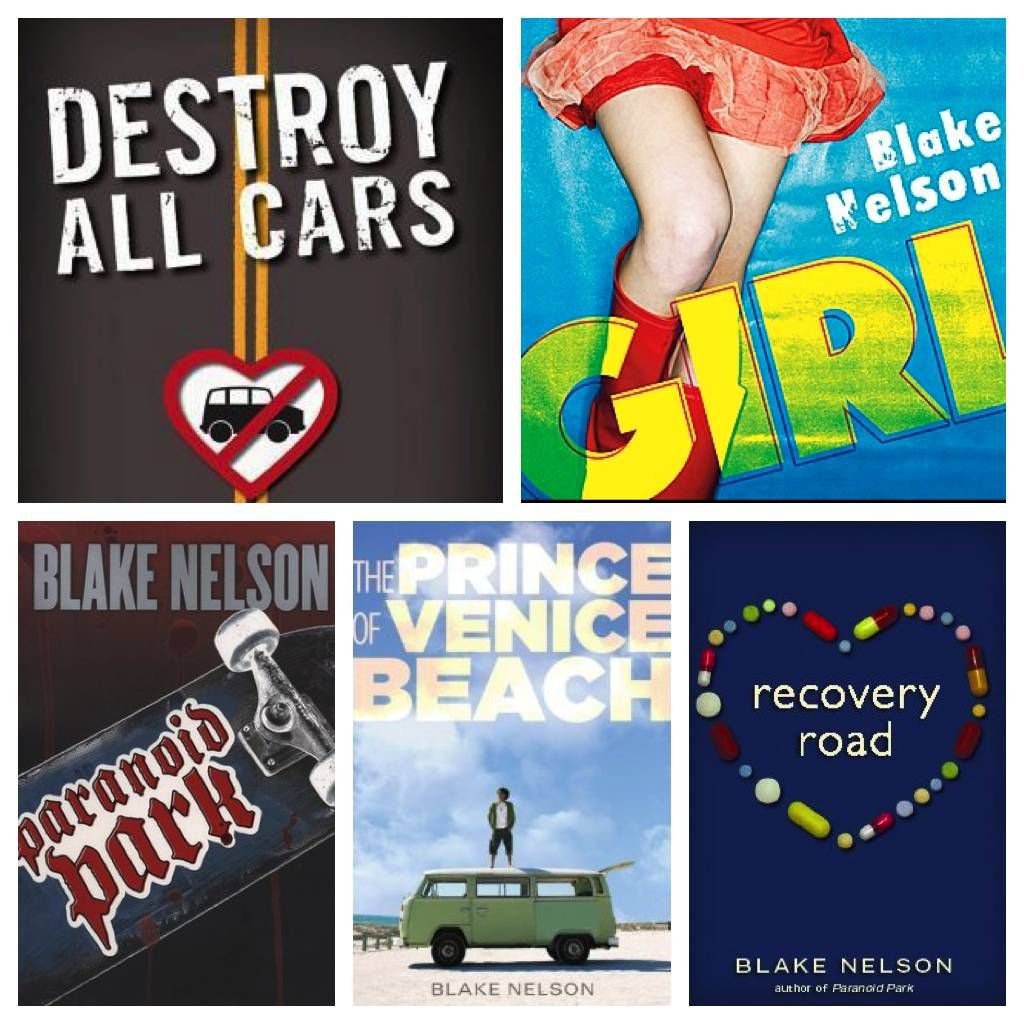 I’ve been writing the Beyond the Bestsellers series here for a few months, and while I have a pile more books I’d love to talk about for that series, I wanted to change directions a little bit. This time around, I thought it could be fun to do a reading pathways post to a young adult author and hopefully build up a few of those.

So today, let’s talk about YA author Blake Nelson.

Perhaps the name isn’t super familiar to casual YA readers. Perhaps even those who have been reading YA for quite a while don’t know him immediately. But Nelson’s been doing YA fiction for a long time — his first novel Girl became a cult classic in YA fiction in the early 1990s, when it was serialized in the teen magazine Sassy.

Since he’s been doing this for two decades, he’s written over 12 YA novels, has been part of the Sister Spit tour, and continues to push his work, which is primarily contemporary realistic fiction, to new and interesting places, remaining a fresh voice in the category.

So where do you begin?

The answer is simple enough in saying that to get a true sense of Nelson’s catalog, it’s worth starting with Girl. Imagine being a teenage girl Portland, Oregon in the early 1990s. There’s grunge, there’s grit, there’s drugs, and there’s plenty of opportunity for sex.

Andrea, the main character, goes from being a shy and conservative girl to working her way into the underground rock scene. Along the way, she questions every single decision and relationship she’s making — she wants to stand out and be seen and noticed but she’s also scared to death to put herself out there. She wonders whether she’s being true to herself or if she’s “selling out” in order to be known and accepted by her peers.

Girl is written stream-of-conscious style, and it’s exhausting and exhilarating because of that. Readers are right there with Andrea and they can see what she’s thinking, what her worries are, and they can see through the entire process that while she’s worried about the kind of girl she is, she’s being the girl who she is. It’s a smart and sharp story, and the hallmarks of the story’s settings — both in time and place — enhance it. Andrea’s exceptionally memorable, and in 2011, Nelson wrote a sequel to Girl called Dream School. It follows Andrea as she leaves Portland to attend her dream college in the Northeast and how her perception of herself and of others shifts (and doesn’t shift) through the transition.

It’s “older” YA by today’s standards, but it’s an important starting point not just for Nelson, but for many of the realistic coming of age stories in YA. Girl was made into a straight-to-VHS (!) starring Dominique Swain as Andrea, and it featured the likes of Tara Reid, Selma Blair, and Portia de Rossi.

When you finish Girl, it’s time to try your hand at an entirely different voice and narrative style in Nelson’s oeuvre. Paranoid Park, which was made into a film by Gus Van Sant, follows a nameless male character after he makes a horrific and life-altering mistake: he kills a security guard with his skateboard.

He doesn’t get caught, though, and it was done in what he believes is self defense. He manages to get away from the scene, and he ditches the skateboard. But being that he was able to get away with it, he’s now stuck with the question: does he confess or does he keep the murder a complete secret in order to live his life like a normal person?

The main character is a good kid, and having this on his rap sheet would be the worst thing possible. But he also wonders if it is worse to not say anything and live with the guilty conscious. This novel is dark and the paranoia and torment the main character goes through internally are immediate and make the reading experience tough (in the best way possible).

What happens when your innocence is lost quickly and unintentionally because of an innocent mistake?

The question at the center of Nelson’s just-released The Prince of Venice Beach isn’t far removed from the one in Paranoid Park: when presented the choice to do the right thing or do the thing that would be best given (x, y, or z) situation, which do you choose?

“Cali” is a runaway who lives on the streets of Venice Beach, California, and while it sounds like it could be the worst possible situation, for Cali, it’s not too bad. He’s got a load of friends, a place to crash at night, and there’s a girl who shows some interest in him. But when a local cop recommends Cali to a private investigator, he’s put into the position of locating a girl named Reese who has gone missing for a reason. And while he loves the work and loves the purpose he’s being given, Cali understands that turning her in comes with a big cost: her freedom and her autonomy.

This book requires a bit of suspension of disbelief, but going in with the idea it’s meant to be a fun boy-turned-PI story makes it work. This isn’t going to be as dark as Paranoid Park, but it will traverse some really heavy stuff anyway: runaway culture and the loyalties that those who live on the streets have to one another and to their own stories.

While we’re tackling Nelson’s lighter-hearted fair, it would be impossible not to talk about Destroy All Cars, which sounds like it’s going to be serious — and some parts of the story are serious — but at heart, it’s a really funny book.

James, who lives in suburban Portland, loves to rail about how cars and their dependency on gasoline are ruining our planet. He hates consumer culture and he’ll take every opportunity to remind anyone how they’re personally contributing to Earth’s destruction. In addition to being angry about the ways humans are destroying the planet, James also devotes significant time to thinking about the first girl he ever fell in love with: Sadie.

His heart’s been shattered by their breaking up and while he spends a lot of time thinking about the other girls who he could date, he can’t stop thinking about Sadie. She’s important to him because she, too, shares a lot of the same beliefs and passions he does when it comes to saving the planet.

Destroy All Cars is told through a variety of lenses, and one of them is through essays that James writes and turns into his English teacher. The teacher responds to these essays, and it’s through this correspondence and the responses James has about those comments where the real humor in this book shines. Throughout the book we get to actually see James get better at writing, better at developing his arguments for his beliefs, and we see him get better at figuring out his relationship with Sadie.

Finally, round out your toe-dipping into Blake Nelson’s work with Recovery Road, which falls on the darker, edgier end of the spectrum.

Maddie’s been sent to Spring Meadows, a rehab center, because she has a drinking and anger problem. Nearly immediately, she befriends another girl in recovery named Trish and they hit it off quickly. But since Spring Meadows isn’t a permanent place, Trish is on her way out when Maddie’s on her way in. Their relationship, while important on the inside, becomes even more important when Trish leaves and they stay in — and out — of touch.

But then there’s Stewart, a boy Maddie meets not too long after. While opposite-sex relationships are forbidden at Spring Meadows, they don’t care and choose to pursue romance anyway. It’s cut short, though, as Maddie’s been cleared to leave and Stew still needs to finish his time in treatment.

The heart of Recovery Road happens when Maddie’s put back into the life she had trouble being fully in prior to treatment. When she was known as the crazy party girl, how can she resume life as a changed, clean, and more buckled-down version of herself? Is that who she really is? And with her interest in pursuing romance with Stew and friendship with Trish, she discovers that being true to herself means coming to make decisions about who she is now and who she wants to be in the future. Does she simply want to get out of high school or does she want to put the work into getting into a great college after graduation?

It’s a bumpy road, and it’s filled with twists, turns, and potholes. Relationships shift and change, and no matter how good Maddie does, she finds that even those she loves and respects deeply can’t follow through on their promises to themselves and she can’t control them. They’re only in charge of their own choices.

ABC Family snapped up the rights to Recovery Road and began taping the pilot for a series drama earlier this month.

These five titles will give you a leap into the great, wide world of Nelson’s YA fiction. And when you’ve seen what there’s to see here, there are still tons more titles by Nelson — both in YA and in adult — to discover.