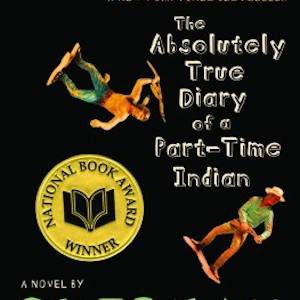 In the spirit of continuing the discussion of diversity, it seems appropriate to talk about one of the few books that’s hit the New York Times Young Adult Bestsellers list in recent memory written by an author who identifies as Native and whose main character is not white: Sherman Alexie’s Absolutely True Diary of a Part-Time Indian. While Alexie’s novel is a regular on the bestsellers list and has been awarded major accolades, including the National Book Award for Young People’s Literature, sales of the book spike when the title is being challenged (you may remember this happened last year when one parent called the book “racy” and said it was akin to “Fifty Shades for kids“).

If you’re a fan of Diary, there are a lot of next reads worth trying. I’ve included a mix of possibilities that tackle some of the most appealing parts of Alexie’s novel. What’s great about this particular novel and next reads is that there was no work involved in developing a diverse set of books that hit upon many of the things that make Alexie’s book so popular. As always, not all of the books recommended will be perfect fits for all readers nor are they “the next” Diary but with this range of options, it should be easy to find a title — or author — that strikes a chord.

Why You Like Absolutely True Diary of a Part-Time Indian

Although Gansworth’s novel isn’t set in contemporary America, this is still an excellent next read. This book follows Lewis, who lives on the Tuscarosa Indian reservation, as he navigates being a smart, exceptionally poor, non-white kid in his all-white classes at school. He’s at the hands of bullying until the day George moves to town. The boys quickly connect over their shared love of music, but Lewis remains worried about what will happen when George discovers more about him — can they still be friends when George discovers that Lewis lives in poverty? Or that he’s mercilessly bullied? This story is less biting than Alexie’s can be, but the themes and the ways that Lewis navigates his two worlds — the realities of his life on the reservation and his life as a smart kid in an almost all-white school — should resonate.

Readers who love Alexie’s book will want to give Matt de la Pena a shot. In Ball Don’t Lie, main character Sticky is a boy who is caught in a life where he can’t beat the system. He doesn’t “fit” anywhere and it doesn’t help that he’s gone from an unstable home life to a foster family to sometimes living on the street and can’t find some kind of solid ground to call his home. Sticky’s not a smart kid, doesn’t love school, and doesn’t always make great decisions. He’s passionate about basketball though, like Junior is in Diary, and it’s through pursuing this passion he’s able to find a way to pull his own life together. While Sticky and Junior don’t have a lot in common on the surface, their stories share many universal themes about being an outsider, about not feeling like there’s a support system behind you, and about how sports (or any passion) can be an anchor.

Readers who appreciate Ball Don’t Lie may also find de la Pena’s Mexican WhiteBoy another solid read alike to Alexie’s novel, as it deals with the challenges of race and identity more head on.

Rico thinks he can blend in when he moves from his home in Harlem to Wisconsin. And he does. The problem is that in doing so, he’s forgetting a part of his Latino heritage, and try as he might, there are some parts of his past that he can’t hide from. Back in Harlem, Rico had been a target of teasing because he was lighter skinned than his black and Latino neighbors.

Hijuelos’s novel is set in the 60s, but the themes of fitting in, of accepting one’s heritage, and straddling the lines between wanting to blend in and wanting to stand out and own one’s identity not only resonate today, but they make this novel one that should appeal to fans of Diary. More, this book is on the edgier and grittier side of the spectrum and has a strongly developed sense of character.

Walker’s novel skews a bit younger than Alexie’s does, but it should still strike a chord with fans (or be a nice introduction for those readers who may not be quite ready for Alexie’s book yet).

Anthony grew up in East Cleveland amid a world of gangs, drugs, and bad decisions. He’s a smart boy, though, and when he’s offered an opportunity to attend Belton Academy, an elite prep school in Maine, he decides he needs to attend in order to better himself and get out of his troubled neighborhood. But fitting in at the school isn’t easy; he’s a black boy in a predominantly white school, and his experiences and knowledge of the world differs widely from his peers. When Anthony heads home, though, he finds fitting back into the groove in Cleveland isn’t easy either. How can he straddle both lines and accept who he is as he is?

This list could go on for a while, but a couple of other backlist titles that would make excellent next reads for Alexie’s Diary include Freak Show by James St. James (for the humor especially) and Tanuja Desai Hidier’s Born Confused (about a girl who has resisted her parent’s Indian traditions and then discovers in school that everything Indian is trendy).

If you’re hungry to learn more and read more works by and featuring Native characters specifically, I suggest spending some time on Deb Reese’s blog, American Indians in Children’s Literature. She offers a wealth of insight into depiction, including children’s and YA book lists that feature strong Native characters.