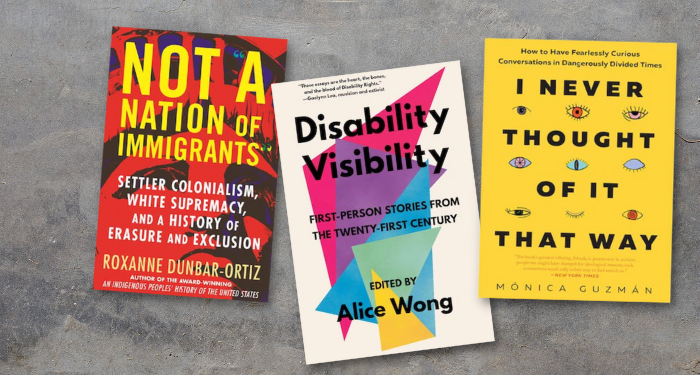 It’s a new year: a time of reflection and new beginnings and, for many, goal-setting. Whether or not you’re the type of person who sets resolutions for themselves at the new year, this calendric shift is a great opportunity for thinking about how to improve oneself.

That’s the intent behind the vast majority of New Year’s resolutions, after all: self-betterment. Among the most popular New Year’s Resolutions for last year were goals pertaining to health, finance, interpersonal relationships, and self-care. It’s also pretty common for people to make goals like “learn something new” or “read more.” Why not bring those last two together?

That’s what this list is about. As we embark upon another trip around the sun, what might it mean to work toward educating yourself about something you’re not familiar (or maybe even comfortable) with in the interest of pushing yourself to be or do better?

With that in mind, I offer you this list of books that touch on some of the topics too often considered “hard” or “difficult” — labels that, unfortunately, tend to scare people away and (even worse) shut down conversation. But these “topics” are, after all, simply part of the tapestry of human experience. So challenge yourself to grab a book and start your year off strong! 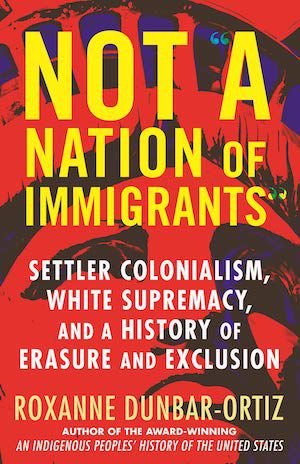 Not a Nation of Immigrants: Settler Colonialism, White Supremacy, and a History of Erasure and Exclusion by Roxanne Dunbar-Ortiz

Roxanne Dunbar-Ortiz is best known for her landmark book An Indigenous Peoples’ History of the United States, and Not a Nation of Immigrants is important reading that looks not only at history but also at the power of the stories we tell. Dunbar-Ortiz challenges the settler-colonial narrative of the U.S. as a nation of immigrants, examining the roots and repercussions of this myth. In so doing, she taps into concurrent discussions about narratives of “progress” and imperialism. 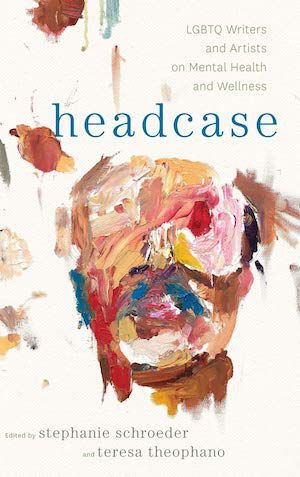 This book is a collection of written and visual art, which makes it a really accessible entry point into thinking about LGBTQIA+ identity as it connects with mental and emotional wellbeing. It’s a uniquely formatted book featuring almost 40 different pieces by queer artists which traverse subject matter ranging from the mental health industry (both positive and negative) to religion and classical mythology to navigating public spaces. Suffice it to say, the diverse array of voices represented in this collection get at the depth and complexity of LGBTQIA+ experiences from a multitude of angles. 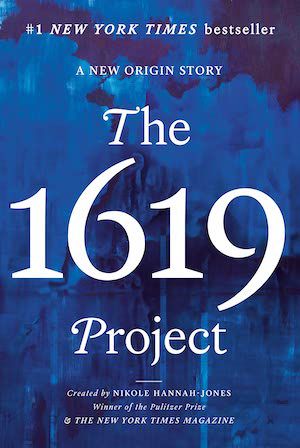 The 1619 Project: A New Origin Story Edited by Nikole Hannah-Jones

I love this book for its powerful essays that reframe the story the U.S. tells about itself and also for its inclusion of creative works that intersperse the critical essays. The book manages to move both chronologically from 1619 to the present and also thematically, opening with an essay on origins and moving on to topical essays that focus on everything from inheritance to sugar to justice. And if you’re wondering what the significance of 1619 is, that’s part of why this book is so important. 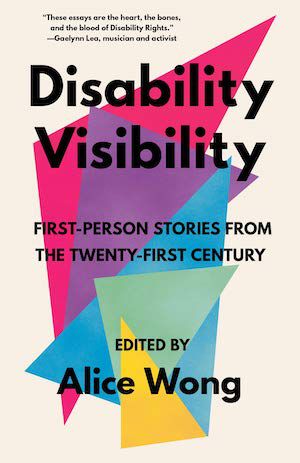 Alice Wong opens the introduction to this book with the line, “Staying alive is a lot of work for a disabled person in an ableist society,” and the collection goes on to illuminate the myriad ways this statement is true. It’s an incredibly dynamic compilation. Composed of narratives written by people with disabilities — some impacting bodies, others brains — the collection is hugely impactful. Significantly, it’s not meant to be exhaustive (hence the robust “Further Reading” section that follows the narratives themselves). Instead, the essays are often both deeply personal and also political, pushing against dominant narratives pertaining to disabled peoples. And it’s no wonder: the collection’s publication was timed to coincide with the 30th anniversary of the Americans with Disabilities Act. 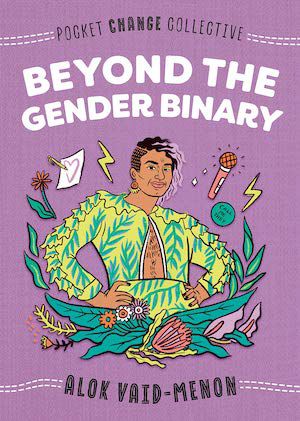 Beyond the Gender Binary by Alok Vaid-Menon

While this book is technically aimed at YA audiences, it’s great for adult audiences, too. Beyond the Gender Binary opens with a concise explanation of the term “gender binary” and immediately connects it to power and systems of oppression. From there, Vaid-Menon deftly merges personal experiences and social theory, offering a strong critique of binaristic thought and gender norms. It’s a smart book with the ability to speak to a very wide range of readers. 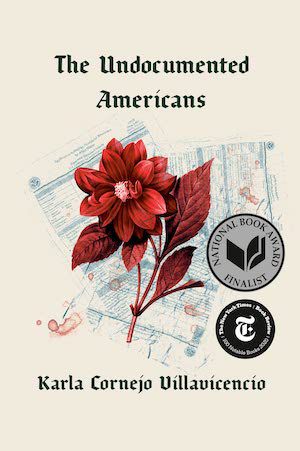 “This book is for everybody who wants to step away from the buzzwords in immigration, the talking heads, the kids in graduation caps and gowns, and read about the people underground.” So writes Karla Cornejo Villavicencio in the introduction to The Undocumented Americans. It’s an unconventional book: part memoir, part interviews, part poetry (in a manner of speaking). Then again, Cornejo Villavicencio is trying to get readers to glimpse the daily lives of undocumented Americans (like herself). There’s hate and anger and fear in this book, but there’s also love and beauty and community. It’s not for nothing that this book was a finalist for the National Book Award for Nonfiction. 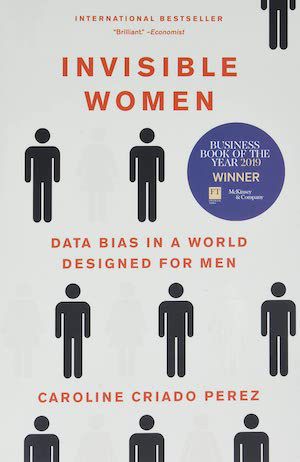 When I first read the title of this book, I thought it was some sort of technical analysis only relevant to people working in the tech industry. While I certainly hope such people are reading this book, that’s absolutely not what Invisible Women is. It’s a really smart and relevant work on nonfiction that looks at how the gender default in western societies is presumed maleness. Of the many things wrong with that, Caroline Criado Perez focuses on the ways this bias has crept into data collection, which is used to shape almost every aspect of contemporary life. Because of this, this gendered data gap has tremendous and far-reaching implications. Let’s just say this book made me so mad, but in the best possible way. As Criado Perez writes in the introduction, the book identifies a significant problem in hopes of inspiring change: “For too long we have positioned women as a deviation from standard humanity…. It’s time for a change in perspective. It’s time for women to be seen” 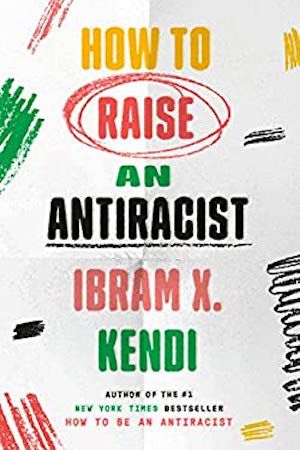 How to Raise an Antiracist by Ibram X. Kendi

In this follow-up to the hugely popular How to Be an Antiracist, Ibram X. Kendi writes for parents. Sharing his personal experiences as a parent caught between wanting to protect his young child from racism and raise a socially aware child, Kendi writes about how teaching kids about racism provides them with a “protective education.” This framing is so important because it’s natural for parents to want to protect their kids and oftentimes this results in not talking to them about racism for fear of introducing them to this “hard topic” and therefore causing harm. However, as Kendi discusses, teaching kids about racism can actually help safeguard kids (whatever their skin color) from its damaging impacts. 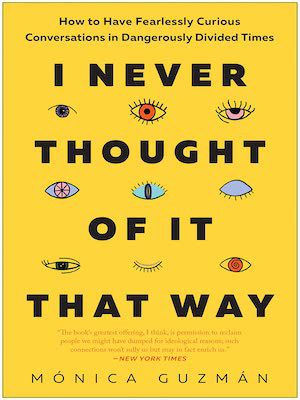 I Never Thought of It That Way: How to Have Fearlessly Curious Conversations in Dangerously Divided Times by Mónica Guzmán

This book isn’t about a “hard topic” itself, but rather is a kind of guide about how to engage in conversations about such topics during our contemporary moment. Guzmán’s book is all about how to reach across perspectival divides in order to really hear one another. The book is divided into sections that focus on various aspects of human experience and conversation in hopes of providing readers with the tools they’ll need to engage others in meaningful conversation. (For what it’s worth, I feel this book would pair really nicely with Claudia Rankine’s Just Us: An American Conversation, in which Rankine’s essays powerfully illustrate the challenges and rewards of having conversations about race and racism in the U.S. today.)

We’ve got you covered! You might consider checking out this list of books on human migration or perusing this extensive list of books about neurodiversity. If memoirs are your cup of tea, take a peek at this list of queer memoirs from red areas. If you’re looking for ways to do something about the attempts to censor materials and further shut down opportunities for education and conversation around “hard” topics, learn about the #BooksSaveLives campaign and ways you can get involved.