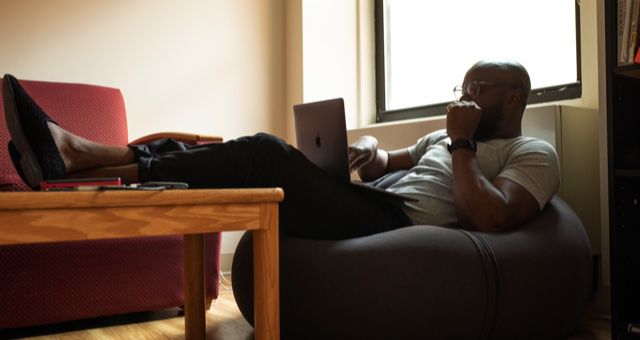 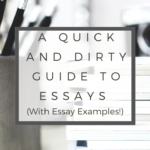 Ah, the essay! The art of reality! Oh, to trap the effervescent moment in a drop of amber, to polish it until it glows, to receive a more-then-passing grade on your English final. Regardless of your reasons, this guide to the different types of essays (with essay examples to edify and inspire you) will discuss what you’re writing, how to write it, and who has written it before.

Argumentative essays use objective, provable facts to make the case for or against a point. You should declare this point in your thesis statement, a sentence that appears in the first paragraph of your essay. However, before you do that, you’d better conduct some thorough research. Argumentative essays are based in facts, and if they’re not, they’re crappy essays.

Persuasive essays are very much the same, except that they base their arguments on personal opinion, feelings, and beliefs.

One of the easiest and best ways to write a strong argumentative or persuasive essay is to use the following structure:

Both argumentative and persuasive essays should stick closely to their point. If, when you reread your essay, you find that not everything you say is directly relevant to your thesis, then that part needs to go. Want some essay examples? We’ve got some winners right here:

In this argumentative essay, the author sticks closely to the point that the Ten Commandments don’t make judicial sense.

Some of the best persuasive essays are speeches! This essay tries to convince graduates that it’s worthwhile to pursue a life of writing.

It’s all about the details! A descriptive essay endeavors to leave the reader with an impression rather than a narrative, which is to say that they’re not plot-focused at all. Nothing “happens” per se, but your audience comes away with something important anyway. Lyric essays tend to be descriptive in nature. Sometimes they’re downright poetic, even venturing into experimental territory.

A descriptive essay can just be several pages about your favorite vacation spot, the way gulls guffaw from the peaked roofs and the sea insinuates into the air until your lungs are gills. We’re all swimming here, all the time, out of the flow of time, etc. In a descriptive essay, you’re not declaiming, you’re exclaiming. Get artsy!

Notice how Sontag evokes visual details as she attempts to decode camp.

Amaris Feland Ketcham, “How We Echo“

This piece doesn’t make a point so much as a statement, and a large part of that is couched in the metaphor of the red canyon rock.

Working on my big essay due Tuesday! I’ve had the last 2 weekends off so I’m further behind than I’d like to be. Luckily I wrote a essay on a related topic last year which has given me a good foundation to go off 😅 • • • • #studygram #studyspo #studystudy #studylife #studentlife #grind #library #studyweekend #studysetup #desksetup #studyview #lists #essaywriting #flooding #masters #postgradlife

If descriptive essays unmoor you and leave you wanting a plot, then you might feel more comfortable here. Narrative essays have a point of view, a narrative arc, a climax, the works. Essay examples of this type tend to feel comfortable to readers who like a traditional story. For the most part, they’re chronological in nature and tend to encompass one particular event, start to finish.

While there are a lot of descriptive elements in this essay, it works up to a grand conclusion (the eclipse) and then back down in a classic denouement.

This essay is quick, but a perfect textbook example of a good narrative essay. Check out the other award-winners at the link, too!

Pretty adequate representation of the past 2 weeks → 0 notes, hundreds of research papers, and tOnEs of coffee. . . . In the 2nd year of medical school i’m at, one full month is dedicated to writing a 3000-word essay (mostly critical inquiry) on selected topic. To complete the task each student needs to conduct a systematic literature search, identify relevant papers, and analyse the findings in their essay. . . . Frankly, it’s very boring and monotonous at first, however when you finally get the chance to really explore and understand the chosen topic, as well as the research evidence behind it, it becomes much easier and can even be very interesting, I dare say. I still haven’t finished, but hopefully I will by the end of this week, so that I can have some extra time for revision of the past modules 🤞🏻🤓 . . . #studygram #studyspo #studymotivation #ipadnotes #ipadpro #macbook #apple #medicalnotes #medical #medstudent #medicalstudent #medschool #medicine #essaywriting #asthetic #aestheticallypleasing #prettynotes #studycommunity #desksetup #deskorganization #goodnotes #goodnotes5 #plantbased #evernote #newstudygram #whitelinespaper #cozy #coffee #latteart #oatmilk

When an author “reflects,” they’re really talking about their memories. These aren’t contiguous in a reflective essay—not like in a narrative structure, where the author sets out to recount one particular event. Reflective essays often tie together several different personal events with what’s going on in the rest of the world. There are few particularly famous essay examples in this category that have really made a splash on the literary world.

While Baldwin focuses mainly on his memories here, he hops around in a nonlinear fashion and examines them with the eye of experience.

The way that Didion skips around her personal history and ties it to its wider context is what makes this a reflective essay.

Want to read some essays? Try these ones from 2019! If you’re interested specifically in essays be women, try this Book Riot-approved selection.