Guadeloupean author Maryse Condé has been awarded the New Academy Prize in Literature, also known as the Alternative Nobel Prize in Literature. Condé was announced the winner at a ceremony held on October 12 at the Stockholm Public Library main branch in recognition of the role played by Swedish librarians in nominating authors for the award. 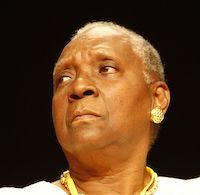 Maryse Condé receives the award for an authorship that “describes the ravages of colonialism and the postcolonial chaos in a language which is both precise and overwhelming,” the New Academy writes in their press release. With the award comes a prize sum of 1 million Swedish kronor or $112,000.

Maryse Condé was born in 1937 in Pointe-à-Pitre on the French-governed Caribbean island of Guadeloupe. Condé has a doctorate from the University of Sorbonne but didn’t publish her first work of fiction until after she turned 40. Throughout her life and career, Condé has lived and worked in Guinea, Ghana, Senegal, and the United States. She currently resides in France with her husband, translator Richard Philcox.

In her thank you statement to the New Academy, Condé says about her award that “Guadeloupe is a small country, important to us who are born there, but only mentioned when there are hurricanes and earthquakes. I am happy that our country is now known for other reasons, for this literature prize which I am so happy and proud to receive.”

Condé describes her authorship in the following way: “I write about slavery, Africa, the condition of black people throughout the world because I want to order my thoughts, to understand the world, and to be at peace with myself. I write to try to find answers to the questions I ask myself. Writing for me is a type of therapy, a way to be safe and sound.” 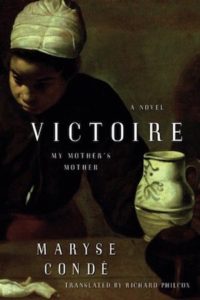 Maryse Condé writes in French, but several of her books have been translated to English, e.g., Segu, I, Tituba, Black Witch of Salem, Crossing the Mangrove, Victoire, My Mother’s Mother, and Windward Heights, which is a retelling of Emily Brontë’s Wuthering Heights.

Maryse Condé will receive her award at a ceremony in Stockholm in December, after which the New Academy intends to dissolve having completed its mission.

The New Academy finalist Vietnamese-Canadian poet Kim Thúy tells the New York Times that the New Academy award is “precious because it comes from the movement of citizens,” and adds that she doubts that she would ever be nominated for the Nobel Prize itself. In the same article, fellow finalist Neil Gaiman expresses a similar sentiment by stating that the New Academy demonstrates a “willingness to look at who are the writers who are being read, who are doing quality work, and who, in whatever department they’re in, are changing the world and making people’s lives better.”

You can watch the announcement of Maryse Condé as the winner of the New Academy Prize in Literature here.

If you would like to read more about the New Academy Prize in Literature, check out these previous Book Riot posts.

Murakami Withdraws from the Alternative Nobel Prize in Literature.

The Alternative Nobel Prize in Literature Shortlist is Here.

A Closer Look at the Alternative Nobel Prize in Literature Longlist.