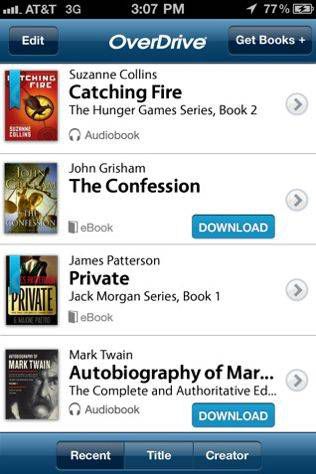 Guess what I got? An iPad. Yes, for real. Yes, I had a Kindle. And yes, I have a Nook. Why do I need an iPad. I don’t. Absolutely do not. Why do I have one? The guy at my local Verizon store was an awesome salesman and gave me a killer deal. I saved money, so it was really hard not to take advantage of that considering I’ve always not-so-secretly wanted one.

One of the first amazing apps I got had to do with books, of course. It’s the free OverDrive app.

So, remember when I told you to go ahead and use your library? Now I have an even better reason. If you have an iPad (or an iPhone, but who reads books on their telephone? Maybe you — not me…remember how I wear glasses and like nice big letters?) you can download library books straight to your device. NO JOKE. How?

2.) Find your local library (through the app, they provide a list of all libraries that participate — and you’ll find that most do). Then “favorite” your library.

3.) Browse your library’s e-books and audio books. Choose one. Click to borrow the book, enter your library number (and save it so you don’t have to do it again).

4.) Start reading your book. It will disappear automatically when it’s due. (No more late fees, people!)

It’s so easy! Can you do this on your computer? Absolutely. Can you do it on an e-reader? Yes, though it’s a bit more complicated to get books this way; you have to download the software to your computer, go to your library’s site separately, download the books/audios you want, then open them in OverDrive, then upload them to your Nook — I don’t think Kindles are capable yet, though I could be wrong. I have friends who rave about using this app through their computer (and downloading e-books to their iPods), but I could never quite make it work. Which is why I’m so excited that it’s SO easy to do it on my iPad!!!

But Wallace, I don’t have a crazy cool Verizon hook up and I’m not about to spend a billion dollars on this device!

Got it. I understand (I wasn’t going to either without this really cool deal). Here are my suggestions for using OverDrive without buying a new iPad.

And for those of you who are about to tell me that you would never read on a computer device (i.e. computer, iPad, Driod, iPhone) because they are bad for your eyes — I was worried about it too. So, I googled the topic and many articles came up — all saying that it’s not reading the computer that is bad for your eyes, it’s the situations in which most of us read on our computers (screens are too far away, poor lighting, etc.). Here are two of the many articles I found that put my mind at ease:

By the way, several years ago – at book club – someone said, “Hey! Did anyone see that Kindle thing Oprah talked about on her show the other day?” We all agreed we would never get one (we were book lovers, people!). Four months later I had one.

A year or two after that, I saw the Nook. It really appealed to me for several reasons (you can read why here). But, I already had a Kindle, so I was never going to get one. A year later I had one.

iPads came out and I thought, are people crazy?! Who wants to read on a computer when you can read books, or on an e-reader? I don’t want to fry my eyes, jeez! I’ll never have one of those things. Now I have one.

The lessons here? Never say never. Or, at least, not if your name is Wallace. And get the OverDrive app… you’ll be supporting your local library while making your life (and book reading experience) that much easier.