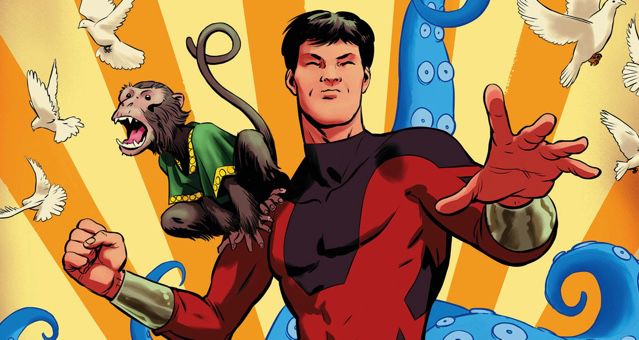 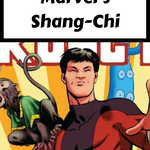 It’s hero time, gang! Master of Kung Fu Shang-Chi has finally hit the media big time with the announcement of his 2021 MCU Phase 4 movie, Shang-Chi And The Legend Of The Ten Rings. Let’s run down this underrated hero so you can sound like the smart one at the midnight opening.

The True Secret Origin Of Shang-Chi

Back in the 1970s, when America was really digging into an obsession with Asian martial arts, Marvel decided that they wanted to write a comic book based on the TV show Kung Fu. The problem was that Warner Communication owned both Kung Fu…and Marvel’s arch-enemy, DC Comics! *Crashing villain music and reverberating cackling laughter!*

Anyway, they said no and Marvel was left without the martial arts hero they were looking for. But there’s more than one way to skin a character, so Marvel got creative. Specifically, they did what fanfic authors call filing off the serial numbers and made themselves their own Kwai Chang Caine in 1973. Enter Shang-Chi, master of kung fu!

So, who is Shang-Chi?

Shang-Chi is the son of Dr. Fu Manchu, a villain Marvel had acquired from the pulp novels of Sax Rohmer. This racist embodiment of everything that old-timey white people feared about Chinese-British immigrants is the actual inspiration for the Fu Manchu mustache. Worse, he’s also a sucky dad. He never breaks it to his hyper-talented kid that he’s an international master criminal. Instead, he tells Shang-Chi that he’s a philanthropist, and secretly makes plans to use his son as an enforcer when the kid is old enough to kick ass but…dumb enough not to figure out that his dad’s evil? For an educated man, Doc Fu doesn’t really think this part through.

Anyway, Shang-Chi heads out on his first assignment, which is to assassinate a man with his bare hands, and shockingly makes the connection that his dad’s a bad guy. Our hero then meets his mom, gets right with his inadvertently evil past, makes friends with some British secret agents, and starts punching people in the name of the law. Finally, he disowns his dad and nobody goes to family therapy.

What does Shang-Chi do?

Shang-Chi travels all over the world, and even into space, to side-kick evil wherever it stands. He teams up, splits up, becomes a humble fisherman, dates Domino for a hot minute, and dutifully turns into a zombie when necessary. Eventually, he becomes a de facto marital arts tutor for the rest of the Marvelverse. He even trains Cap and Spider-Man. At the same time, he remains a solid addition to any supergroup and your go-to for foiling international world domination plots by his family of origin.

Who are Shang-Chi’s enemies?

Aside from his dad, whose plans he commits to foil forever, Shang-Chi clashes regularly with his sister Fah Lo Suee. She opposes Fu Manchu as well, mostly because she’s pretty sure she could run a better international criminal empire than him. Who’s to say she’s wrong? Fu Manchu can’t even get a decent world domination plot off the ground because he’s got so much drama with his idealistic son.

Of course, it eventually comes out that Shang-Chi’s dad is not the real Fu Manchu, but in fact a long-term imposter named Zheng Zu. This both adds to the Fu (Zheng?) family’s dysfunction and gave Marvel an easy out for a cringey dud of a character that they probably regretted purchasing by then. Find even more info about Shang-Chi villains here.

Rad! What are Shang-Chi’s powers?

Nothing! Mostly. Shang-Chi uses his chi, or life force, to add kick to his kicks and punch to his punches. Theoretically, anyone who works hard enough can do that, so I guess his real superpower is practice. If it means anything, he can fight Iron Fist to a stalemate. There’s also some evidence that he can sense other people’s chi, which means that he’s a hard dude to hide from.

Occasionally he uses Stark-tech chi-focusing bracelets and rocket nunchakus. (Repulsor nunchakus. Whatever.) He also develops the ability to duplicate himself after exposure to the site of a bomb explosion where the bomb was supposed to accelerate human evolution—it’s complicated. Anyway, that wasn’t until 2015. For the most part, Shang-Chi is just a really, really good marital artist and a great kung fu instructor.

Any dirt on the movie?

Shang-Chi will be played Canadian actor Simu Liu, most of whose work has been on TV prior to this. His best part was on the CBC sitcom Kim’s Convenience. There, he had a touching family reconciliation arc and did a great job without doing (as far as we know) a single flying kick. Speaking from personal experience, flying kicks are better for relatives you’re already close to in an emotional sense.

Awkwafina has also been cast in Shang-Chi And The Legend Of The Ten Rings. No word yet on whether she’ll be playing a love interest, Shang-Chi’s sister, the lesbian best friend that I assume he has, or what. Considering Shang-Chi’s resoundingly screwed up family, there isn’t really a reason to fridge anyone. Hopefully she doesn’t end up unnecessarily chilling with the milk.

There’s a lot of disturbing racist nonsense in this character’s history. Marvel itself already has a massive Asian representation problem. Fu Manchu (god, every time I write it my esophagus tries to strangle me to death) was a very bad start. Unfortunately, it’s 40ish years too late to fix that. The fact that Shang-Chi becomes a hero when he turns on his family and starts helping white people is also a really terrible look. One way or another, Marvel’s going to have to deal with these legacy issues. They are already hitting Twitter with deserving splats.

Small-project director Destin Daniel Cretton, who’s good buddies with Brie Larson, will direct. This will be the biggest film of his career so far, so wish him luck. It’s a very positive sign that Marvel knew enough to get an Asian cast and Asian director for this movie about Asians. That might not sound like a big step, but at least it’s in the right direction.